The Toronto chef is bringing back her female-lead dinner party, and this year, it's bigger than ever 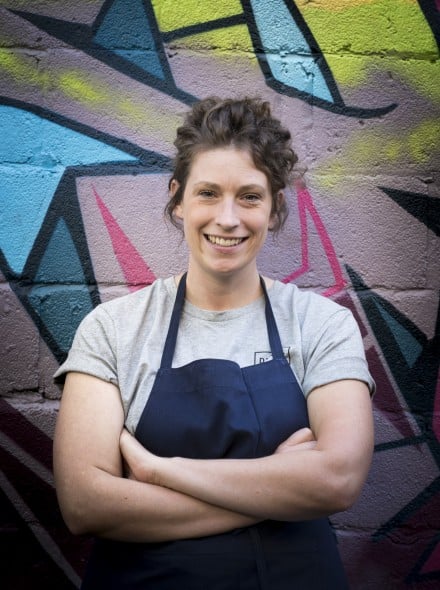 In addition, for the third iteration of this event (it was also held in 2012 and 2013), 32 prominent male chefs will act as servers for guests seated at two triangular tables, pushed together to form an hourglass shape. Judy Chicago’s installation features a triangular table with 39 place settings — each one honours an iconic woman in history.

Feswick, who started the Toronto event back in 2012, says her main mission with The Dinner Party is to give other women a creative platform to do what they do best — cook. “I wanted to create a space where we could really showcase our talents and have people come,” she told Chatelaine. “This year, especially, has been about making a collective voice as female chefs.”

We spoke with Feswick about The Dinner Party, sexism in the food industry, and how women chefs need to help carve out a path for other women to lead.

The last time you hosted The Dinner Party was 2013. What’s changed since then, from your perspective?

There’s still a lot of bro culture. There’s still a disproportionate number of men running kitchens [compared] to women. But there are a lot more women actually running kitchens now who are developing a voice and sharing a lot of the issues they were having when it comes to segregation, being mistreated and having to work harder than the men in the kitchen. I think that’s a pretty common theme that a lot of women feel in general, never mind in kitchens.

Do you think women end up taking on specific roles in professional kitchens?

For me, it’s more than just the internal kitchen operation. I feel it mostly when I leave the kitchen now and I go to events and people will specifically state that they need a woman to sort of fill that diversity void in their line-ups at festivals or that kind of thing.

I was working up north, a couple hours out of the city, at a field festival. Another chef came over and asked one of the male cooks I had brought who the chef was, and the cook said, “Oh, no, Alex is the chef.” And he [the other chef] said, “Oh, so you’re both chefs together,” as if I couldn’t be the chef by myself, but he could. And that was coming from another chef.

What would you say are some of the barriers to having women run professional kitchens?

As a mother, how do you find balance?

I have a two-year-old son and I guess prior to Reed being born, I was always like, “Women can have it all — we can do everything!” And then having Reed just, for me, it has been a lot of determination to make things work. And maybe we’re not in a place where that’s exactly ideal. I guess if people like me don’t continue to push those boundaries, to have families and to have professional jobs, we can’t make way for other people to follow behind.

While The Dinner Party celebrates women, is the idea to try to bring everyone — men and women — together in one room?

Yeah, and I hope that people who are coming up in the industry will be able to look at all 65 participating chefs, whether they’re men or women, and see that as kind of a green light that these are places that aren’t going to tolerate sexism, and are in support of men and women cooking together. You don’t have to go work at all of these people’s kitchens, but they’re a good start to look at.

What do you hope guests take away from the Dinner Party?

I hope they see a community working together, and that female chefs are developing a collective voice and trying to be shining stars and leaders for other women coming up, so that diversity, or having to seek out a female chef at a festival, isn’t a thing in the future. I know that’s not going to change overnight, or with The Dinner Party, but if we don’t try to actively do something about it, then it won’t change. I truly believe talking about it isn’t enough and that we actually need to do something — and for me, this is that.

This Q&A has been condensed and edited for clarity.