These foodies shine a spotlight on the global cuisines that have always had vegan and plant-based traditions. 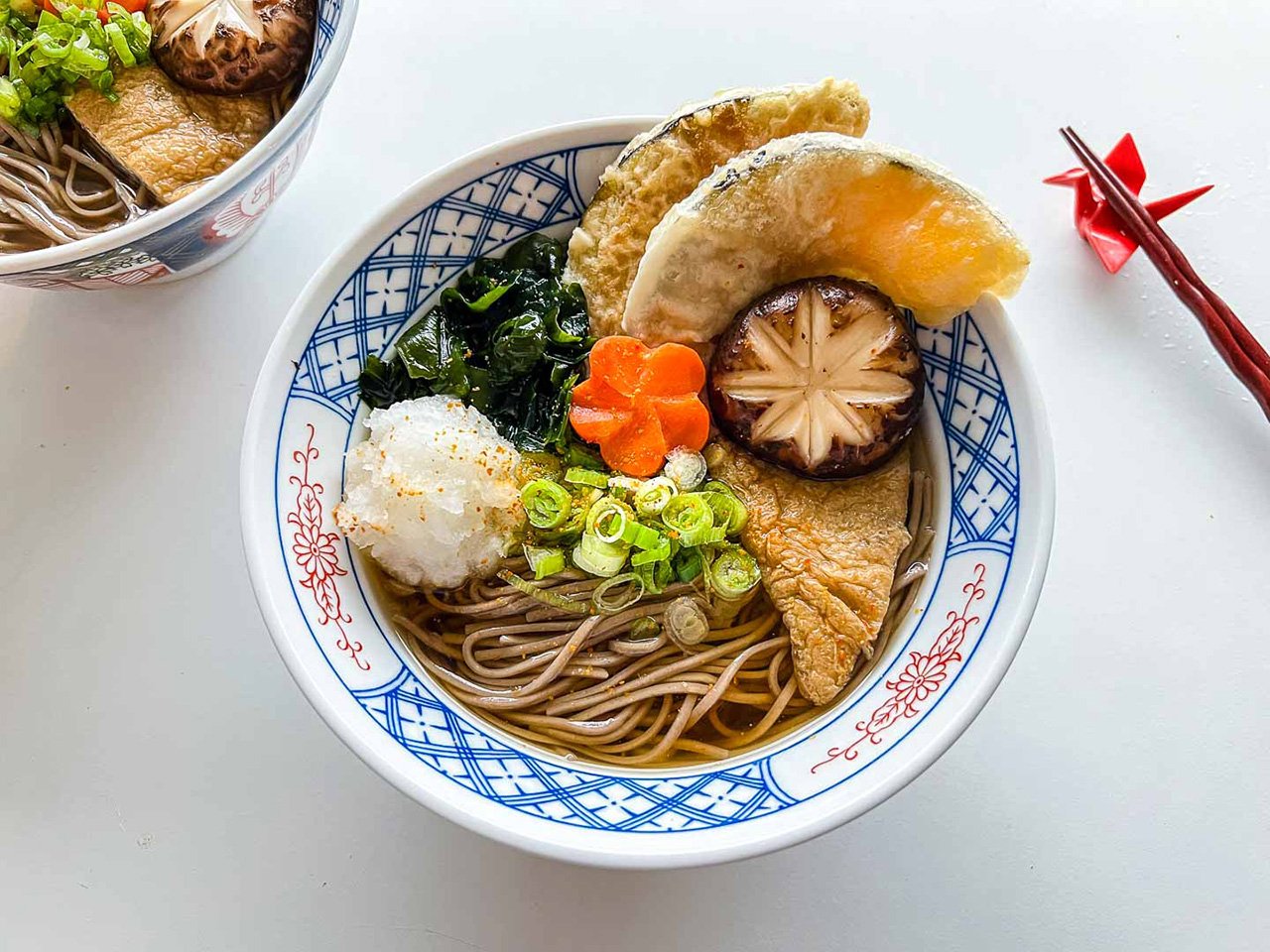 In a 2020 Forbes article celebrating Instagram’s 10-year anniversary, a spokesperson for the photo-sharing app emphasized the platform’s commitment to building food-centric communities, specifically representing voices who have been overlooked in online food culture. But two years later, even as Instagram’s algorithms have changed to supposedly help more food creators amplify their content, the onus remains on users to diversify their own feeds. Unless a user has made the concerted effort to follow a wide range of vegan influencers, their feed risks remaining limited and not accurately representing a global description of vegan and plant-based life.

In the world of Canadian vegan Instagram, some are working to push back against the white co-opting of what veganism looks like. These social media accounts shine a spotlight on the global cuisines that have always had vegan and plant-based traditions. 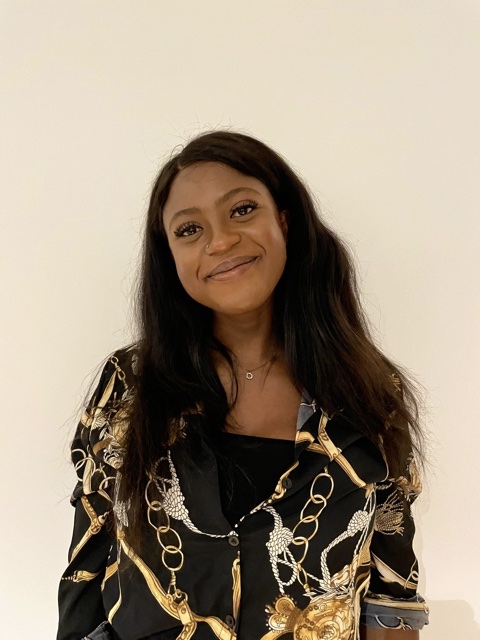 Afia Amoako lives two lives: one as a Toronto-based graduate student pursuing a doctorate in epidemiology, and a second as a home cook and recipe developer showcasing the plant-based foods of West Africa on Instagram. There, more than 102,000 followers can find recipes for Ghanaian swallows, such as fufu, that she pairs with groundnut soup, or kenkey, typically served with “pepper” (mashed tomato, onion and pepper, and shito). Amoako has even been featured in The New York Times by food columnist Yewande Komolafe, who describes her Instagram as a “robust forum for discussing what it means for everyday Ghanaian dishes to be adapted to suit a plant-based diet.”

At first, Amoako says her journey to becoming vegan began with a focus on sustainable living. “Sustainability was my first love, but the reason I remain a vegan has evolved,” she says. Amoako believes it all comes back to the interconnected nature of the world that is bigger than a few, predominantly white, voices who take up a lot of space online. So, for the past seven years, Amoako has used her platform to educate followers about West African ingredients and recipes; she has even compiled an FAQ section on her site that includes guidelines about asking for recipes, grocery store locations, substitutions, and the importance of buying culturally specific ingredients from local West African-owned businesses.

For Amoako, connecting with other vegan voices of colour has created a sense of community. “I have purposefully disengaged from a minority of white militant vegan voices in my feed so that I can live in a bubble,” she says, setting herself apart from accounts she feels are aggressive about vegan eating and cooking that do not resonate with her own vegan journey. “As a new vegan, I had many questions about what I was going to eat and most importantly how I could maintain my culture and still live a healthy and sustainable lifestyle,” Amoako writes on her blog. She started @thecanadianafrican to “show people that it is possible to live an ethical, plant-based lifestyle without losing your culture.”

Amoako suggests non-dairy milk as an easy starting point for someone considering vegan lifestyle choices. “Veganism goes beyond food and you can start small. The options available are so diverse!” 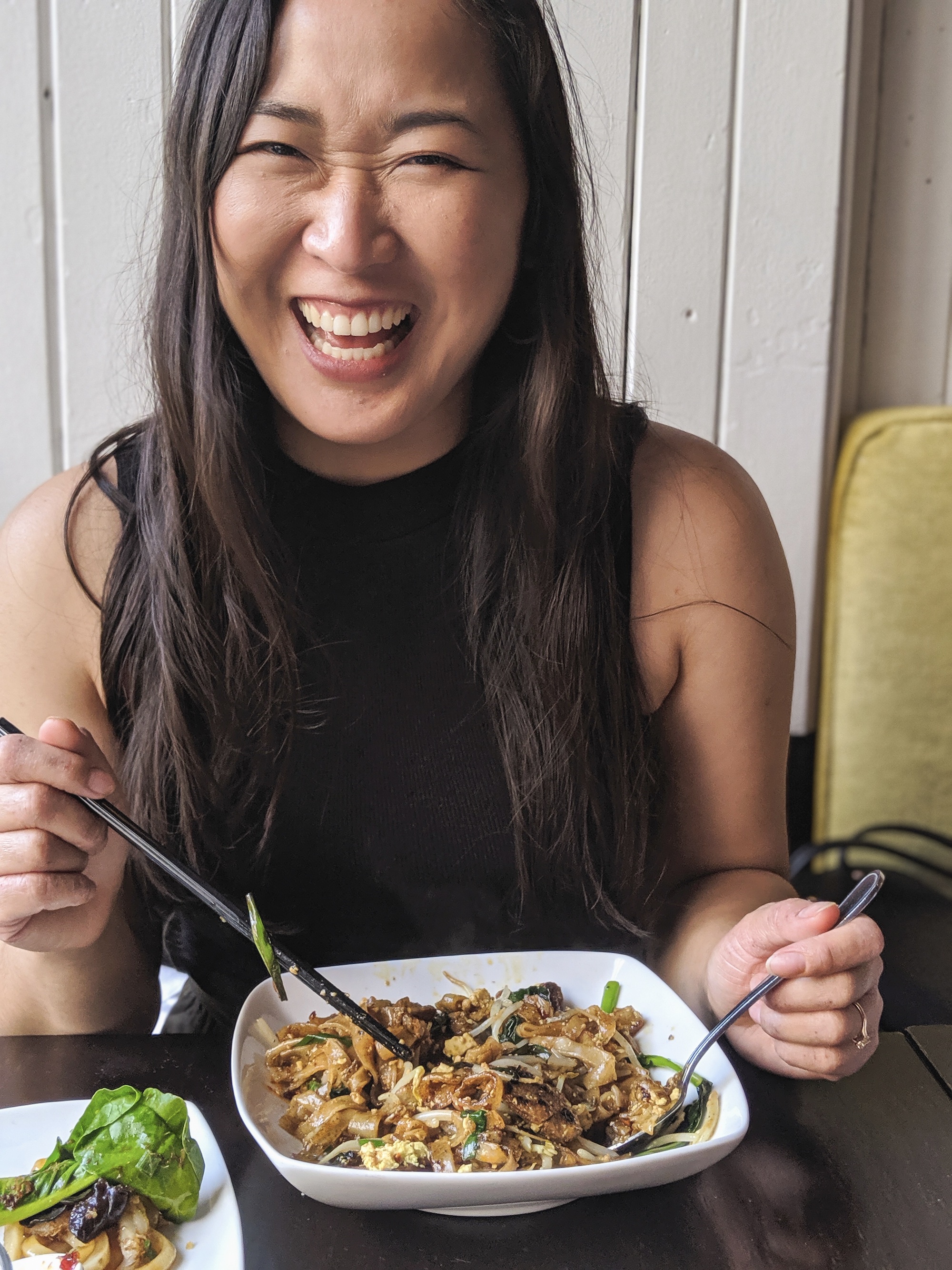 Lisa Le adopted a vegetarian diet in 2011 in hopes of healing her eczema, and joined the Toronto Vegetarian Association when she moved to the city from Ottawa to start her master’s degree in translation studies. But soon after, her motivations for adopting a plant-based diet changed: Le says plant-based cooking is “an exciting way to explore new foods, cooking techniques, and new cuisines while doing good for the planet.”

Nine years ago, Le started @thevietvegan to share recipes such as vegan split pea soup, vegan cauliflower couscous and vegan banh mi. These days, stories about life with a newborn are also mixed in, and she’s not afraid to get political with her posts, with story highlights calling out white fragility in the online realm and the necessity for BLM allyship.

Engaging with other vegan Instagramers like Amoako also encouraged Le to try cooking Thai, Ghanaian, Nigerian, Ethiopian and South Indian food. “I got more comfortable with cooking from my own culture, which is Vietnamese,” she says. Like Amoako, Le points to the environmentally sustainable aspects of vegan cooking and also highlights the lower food costs. “Pantry staples like beans, rice, tofu and vegetables have helped me stretch my grocery budget throughout the leaner years when I was paying off my student debt [or] paying for a wedding,” she says. On Le’s blog, she points to budget-friendly recipes like her curried stew, emphasizing the economical nature of plant-based cooking. “It’s taught me to be creative and better balance my meals.” 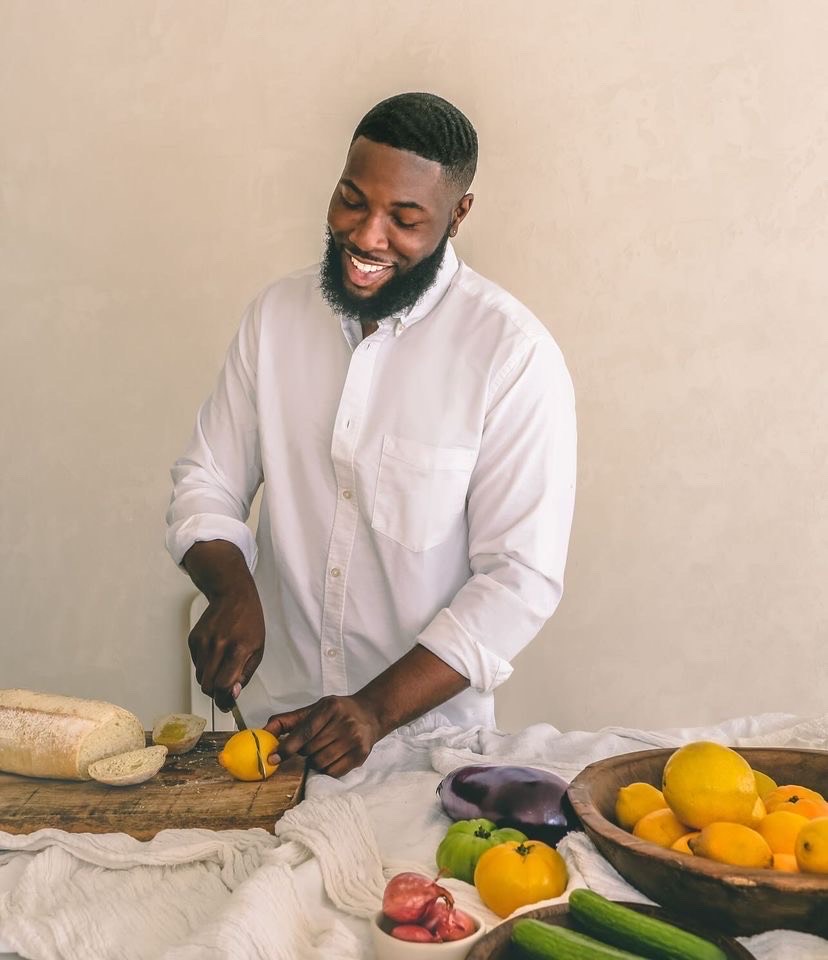 Toronto-based Rose’s vegan story began with a documentary. He was encouraged by a friend to watch What the Health on Netflix, a film linking diet and disease. “About 30 minutes into the documentary, watching animal lives being taken, and seeing that I could simply eat what they eat” instead of eating the animals themselves helped Rose decide to change his diet. “It started with ‘let’s try it for a few days’ and now it’s four years later! I am still plant-based and feeling amazing!”

On his Instagram account Plant Crazii, Rose has 140,000 followers with whom he shares engaging cooking videos and recipes that have garnered him a book deal. “My platform has allowed me to share my family’s Jamaican culture, my values and personality through my food,” he says. Filming a recent trip to Jamaica, Rose took his Instagram followers along with him to market stalls, highlighting local vegetables and fruit, smiling into the camera while drinking fresh coconut water from the shell.

“If you are someone looking into incorporating more plant-based meals into your diet, you can simply start with doing meatless Mondays,” Rose says. “It actually gets pretty awesome if you get friends and family to do plant-based Mondays with you because, from my experience, people begin to look forward to it!” 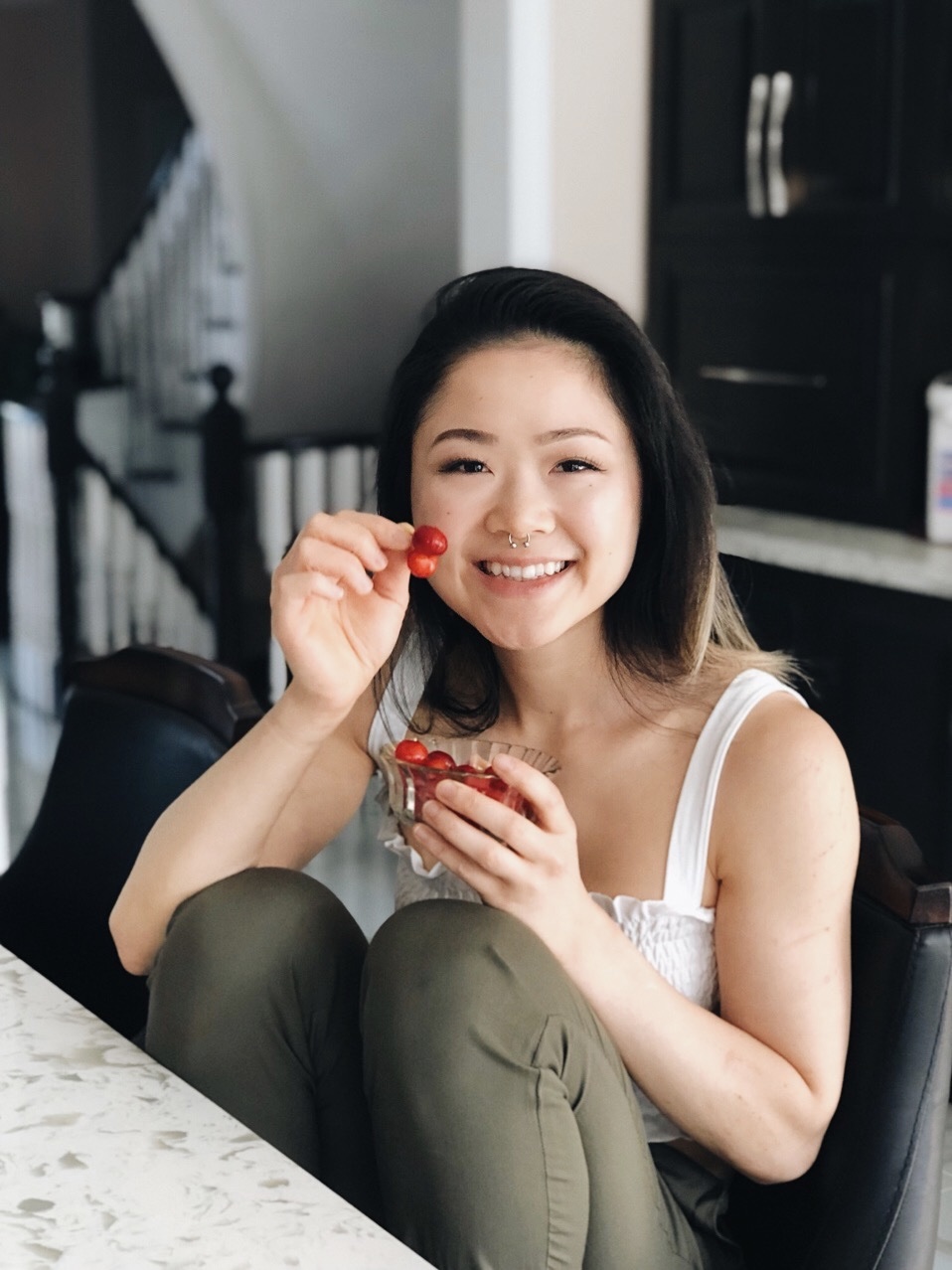 Nine years ago, Lisa Kitahara watched Earthlings, a 2005 documentary about humanity’s economic dependence on animals. “I watched the entire documentary and decided, on the spot, to cut out all animal products,” she says. While her vegan life started for ethical reasons, Kitahara, who is based in Toronto, says she also learned more about the financial and health benefits over the years.

When she first started her Instagram page in 2013 to post about what she was cooking, Kitahara says she used to share a lot of “veganized classic North American recipes that we all know and love: pasta salads, mac n’ cheese, soups and stews.” But over time, her approach shifted, and in 2020 she rebranded as @okonomikitchen to share the Japanese and Chinese dishes she grew up eating. Her decision to centre ingredients like Japanese sweet potatoes and all manner of miso has struck a chord with those who follow her online. “I experience a lot of racism and a very important outlet to me for dealing with this is cooking Asian food,” one commenter wrote on Kitahara’s blog. “Lisa’s recipes have been extremely important in sparking creativity and creating a space that grounds me in my identity.”

Kitahara says she’s also received a lot of positive feedback from followers who have seen her swap ingredients for the plant-based version in her posts. “I think a lot of people are intimidated when it comes to trying vegan food because they feel like it’s an all-or-nothing thing,” she says. “But it’s become so much easier to start small and change out ingredients like milk, meats, and even eggs!”