The Best Kitchen Towels Cost Less Than $2 Each 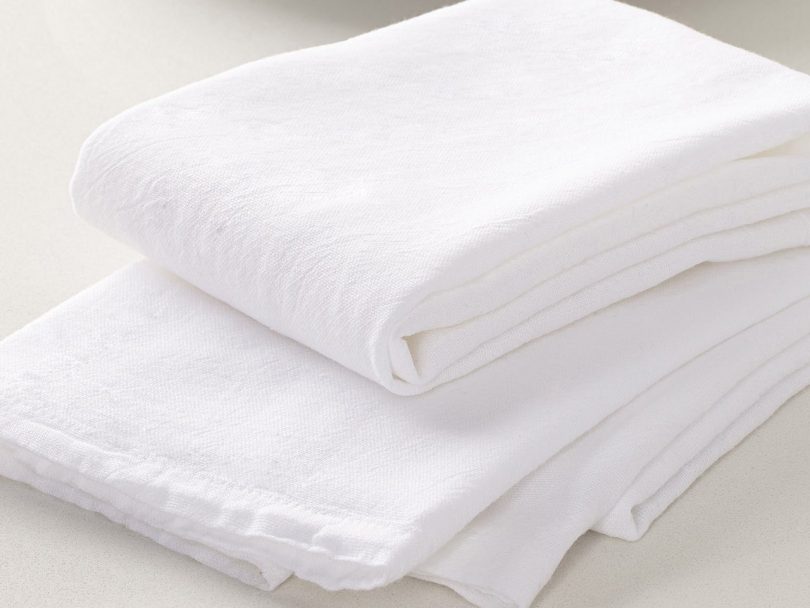 They're simple and match any kitchen. Photo, Simons.

Marie Kondo-inspired minimalism is making a name for itself in the mainstream as more people pare down their belongings and live intentionally with less. For someone like me, whose aim is to mix practicality and beauty with a toddler in tow (talk about a work in progress), I seek out products that do double-duty. The humble flour sack towel hits the mark of simple charm and rugged responsibility.

What is a flour sack towel?

These towels aren’t actually sacks. They get their name from the tightly woven cotton bags that used to hold food staples like flour, cornmeal and sugar. Once the sacks were empty, homemakers found ways to reuse them. The flour sack towels of today have come a long way. They’re refined yet rugged with a plain white cotton design that works beautifully in any kitchen.

How to use flour sack towels

I first used flour sack towels as, well, towels—purely to dry my hands in the kitchen. But since they’re 100 percent cotton, they’re more versatile than meets the eye. They’re highly absorbent and dry faster than a standard dish towel. They’re also dye-free, meaning they’re completely food safe. With this newfound knowledge, I started experimenting with them—and it wasn’t long before I was using them for all sorts of kitchen tasks.

I quickly learned that they’re perfect for wringing out freshly washed greens, herbs, and veggies; wrapping and storing produce; covering homemade ferments, like kombucha and sauerkraut; and drying dishes. After a quick run through the washing machine, I realized that they could do all of these things over and over (and over) again without snagging, pilling, or falling apart. Next came straining yogurt and homemade ricotta, then lining bowls to proof sourdough bread. My two-year-old also found a use for them as blankies for her dolls. See? Multifunctional!

As the fabric wore down after a year of continuous use and regular washes (I wash about three towels per week), I added them to my cleaning artillery (washing cotton towels is also better for the environment, compared to microfibre wipes). And when I started wiping mirrors and faucets with them in all their lint-free glory, I knew I’d never go back. After singing their praises to friends, I learned that a fellow mom was using them as burp cloths and receiving blankets for her newborn. Another friend was successfully using them as inserts for her babe’s cloth diapers!

Where to buy flour sack towels

Depending on how you want to use your flour sack towels, you can buy thick ones for drying dishes and wringing out greens and opt for thinly-woven towels for jobs like straining yogurt and cheese. For $20, you can get a 12-pack of higher quality towels from Utopia Kitchen. Simons also sells a two-pack for $6. My favourite are the sturdier ones, which last me at least a year or two, depending on what I’m using them for.

Proof your cinnamon bun dough in a flour sack towel