They're all certified bangers—but one Timbit-flavoured offering is a cut above the rest. 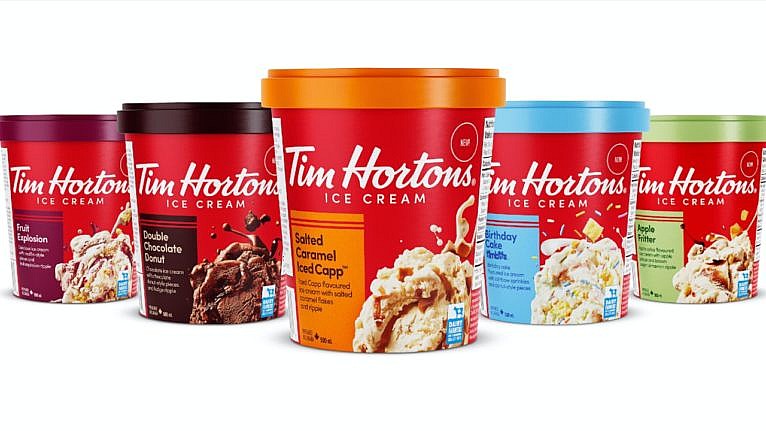 Tim Hortons is joining the ice cream game and I, a self-professed connoisseur of snacks, couldn’t be more thrilled. Adding to the brand’s other packaged foods, such as granola bars and cereal, these five new ice cream flavours based on popular Tim’s treats are now available for purchase at most grocery store chains. Salted Caramel Iced Capp, Double Chocolate Donut, Birthday Cake Timbits, Apple Fritter and Fruit Explosion ice creams are modeled off items you can find at any given location, and they’re made in partnership with longtime Ontario ice cream producer Shaw’s. I dedicated my lunch break to tasting each flavour. Here, I report back with my findings, from “least likely to buy myself” to “absolutely will purchase.”

To be clear, this isn’t a bad flavour; it’s very good. It’s just not my favourite. If you’re a fan of the apple fritter (it’s one of Tim’s most popular donuts), you likely won’t be disappointed. It’s reminiscent of fall and apple spice, with sugar-cinnamon ripples that run through the ice cream, making sure the flavour is infused throughout. A lot of ice creams pack the flavour at the top and once you get to the middle of the tub, it’s more or less plain vanilla. This does not do that.

The moment I pulled back the wrapper seal, the familiar and comforting waft of Tim’s signature iced cappuccino immediately hit me. The salted caramel flakes are bountiful with each bite and add a nice, chewy texture, while the ice cream itself is very caramel-y. I will say that it’s iced capp-flavoured, meaning there’s no actual coffee in the ice cream.

I was surprised by how much I liked this one. It’s based on Tim Hortons’ fruit explosion muffin, something I can’t say I’ve ever purchased. The ice cream itself has a strong summer berry flavour and what Tims calls “muffin-styled pieces” (it had the texture of a cake bite) sprinkled throughout. It’s a nice medley of tart and sweet, and was probably the most refreshing of the bunch.

When I was a broke university student, my treat to myself was a double chocolate donut and lemonade on particularly taxing days. Artisanal donuts are great and I will gladly eat them, but these have an emotional resonance with me. That said, this ice cream is for the chocolate lover. It has swirls of fudge and nice “donut-style pieces” (more like brownie bits, IMO), making it very indulgent. The ice cream itself seems like run-of-the-mill chocolate, so you don’t necessarily need to care about the donut to like this.

Chef’s kiss. If you remember the classic vanilla Dunkaroos with the confetti sprinkle dip, this is that—but in ice cream form. It’s creamy, has soft and chewy “donut-style” pieces of birthday cake Timbits, and is fairly identical in taste to its namesake. I ate more than I care to admit in one sitting (they are 500-mL tubs, if that helps).