Everything You Need To Know About Tagine

Tagine refers to both the legendary North African stew *and* the cone-shaped pot that it’s cooked in. All your questions answered—including why you need it in your life. 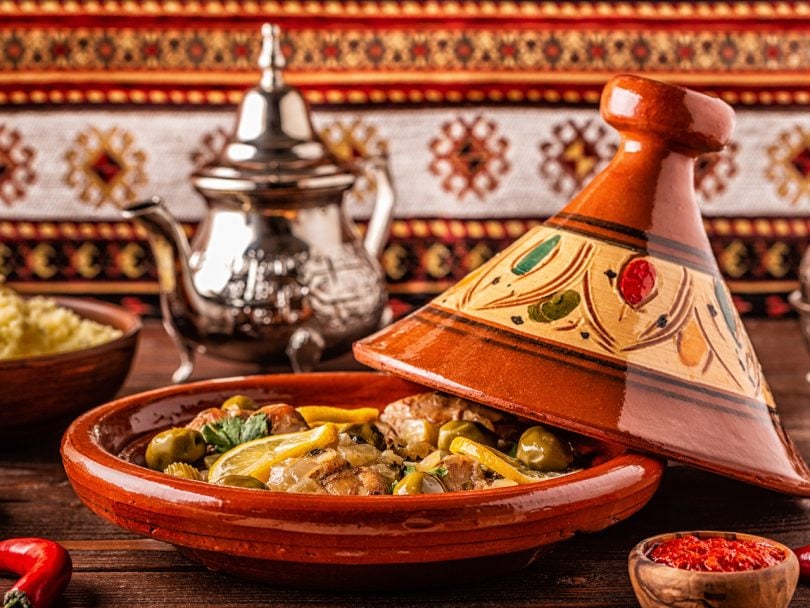 Growing up in a Moroccan Jewish home in Toronto, I always thought of tagine as the sweet and savoury stews my mom would make for Shabbat dinners and holidays—lamb with prunes, or chicken with olives or apricots. She cooked these recipes by heart, passed on to her from her own mother and grandmother and generations of Moroccan women influenced by Amazigh, Arabic, Andalusian and Mediterranean cooking traditions and flavours.

But it wasn’t until my first trip to my parents’ homeland that I realized the profound importance in our North African culture of not only these dishes, but the clay cookware itself—also called a tagine—which is essential to the way these aromatic stews have been prepared for centuries.

When I arrived in Marrakech, the last stop on the G Adventures tour of Morocco that I was on, my fellow travellers and I (all tagine enthusiasts by this point) were taken to a cooking class at Dar Cherifa, an open-air restaurant in the middle of the medina, or old quarter. In this stunning 16th century sandstone riad, a traditional Moroccan house wrapped around an inner courtyard, a couple of local chefs instructed us in all things tagine, teaching us how to prepare our own classic recipe of chicken, preserved lemons, olives and saffron that would make any Moroccan mama proud.

Here is everything I learned about tagine—and what you need to know about making it at home.

What is a tagine pot and how does it work? 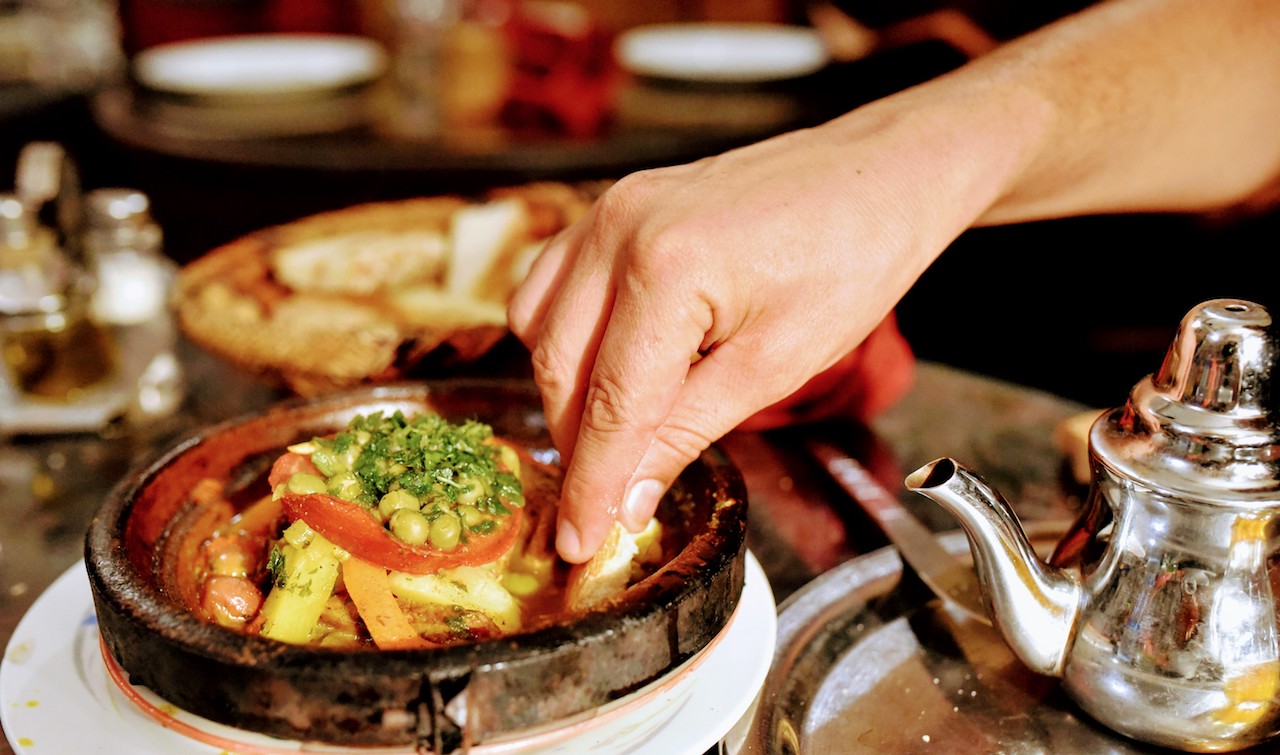 A tagine pot is a cone-shaped clay cooking vessel for the slowly simmered and generously spiced dishes of North Africa. It comes in a two-piece set, with a round and shallow base topped by a conical lid, tapering at the top with a knob that also serves as a handle to check on what’s bubbling inside.

While tagines are similar to other thick-walled pots with tight-fitting lids, such as Dutch ovens, what makes them unique are their conical shape, which promotes steam circulation with very little water. While the food is being cooked, the steam rises up into the cone, condensates, and falls back into the dish, continuously basting the other ingredients and keeping them moist and buttery. This was ingenious for nomads living in the desert, where water was scarce, and their shallow base’s dual function for both cooking and serving food made them space-efficient, too. Tagines were used as portable ovens, placed over an open fire or a bed of coals.

Classic clay or earthenware tagines are usually unglazed, which lends the dishes they cook an earthy flavour, but you can find them nowadays in different types of materials, including glazed ceramics, and in a multitude of colours and designs.

What are the best tagines to buy? 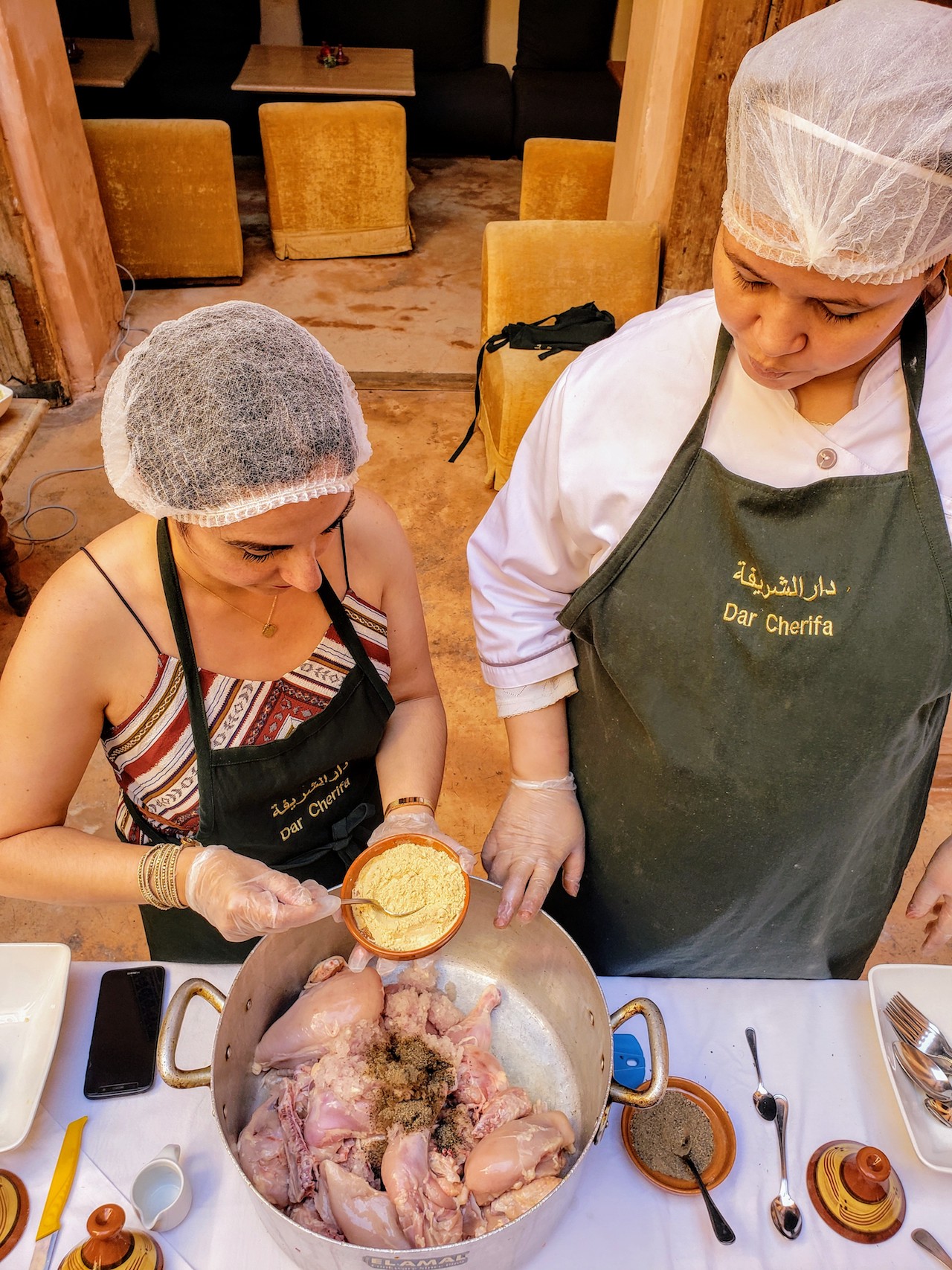 Purists would insist that traditional unglazed clay or earthenware is the way to go. But if you’re buying an authentic Moroccan clay tagine, do your homework. Health Canada has warned that some tagines may contain dangerous levels of lead if the ceramic isn’t glazed uniformly or the pottery isn’t fired at a hot-enough temperature, so make sure you’re getting one from a reputable manufacturer. Also ensure that your tagine is meant for cooking rather than just for serving or decorative purposes. When cleaning an unglazed clay tagine, hot water and baking soda should suffice. If necessary, you can use a mild soap and rinse well. Remember that clay is very porous, so you don’t want it to absorb a soapy taste.

Even without the traditional clay cooking vessel, you can still make a mean tagine—even in Morocco. In many authentic restaurants the food may be brought to your table in an elegant tagine, but not necessarily have been cooked in it. When you’re cooking for a crowd, a plain old stainless-steel pot or Dutch oven might be the way to go.

You can find tagines made of different materials, such as flameware (flameproof ceramic cookware), which can be used at a higher temperature than traditional clay tagines, or cast iron, such as Le Creuset, which some people may appreciate for its durability and the way it retains heat for longer. Cast iron is also way easier to take care of compared to clay.  But no matter what kind of tagine you get, don’t let it just sit pretty on your shelf. Put it to good use! 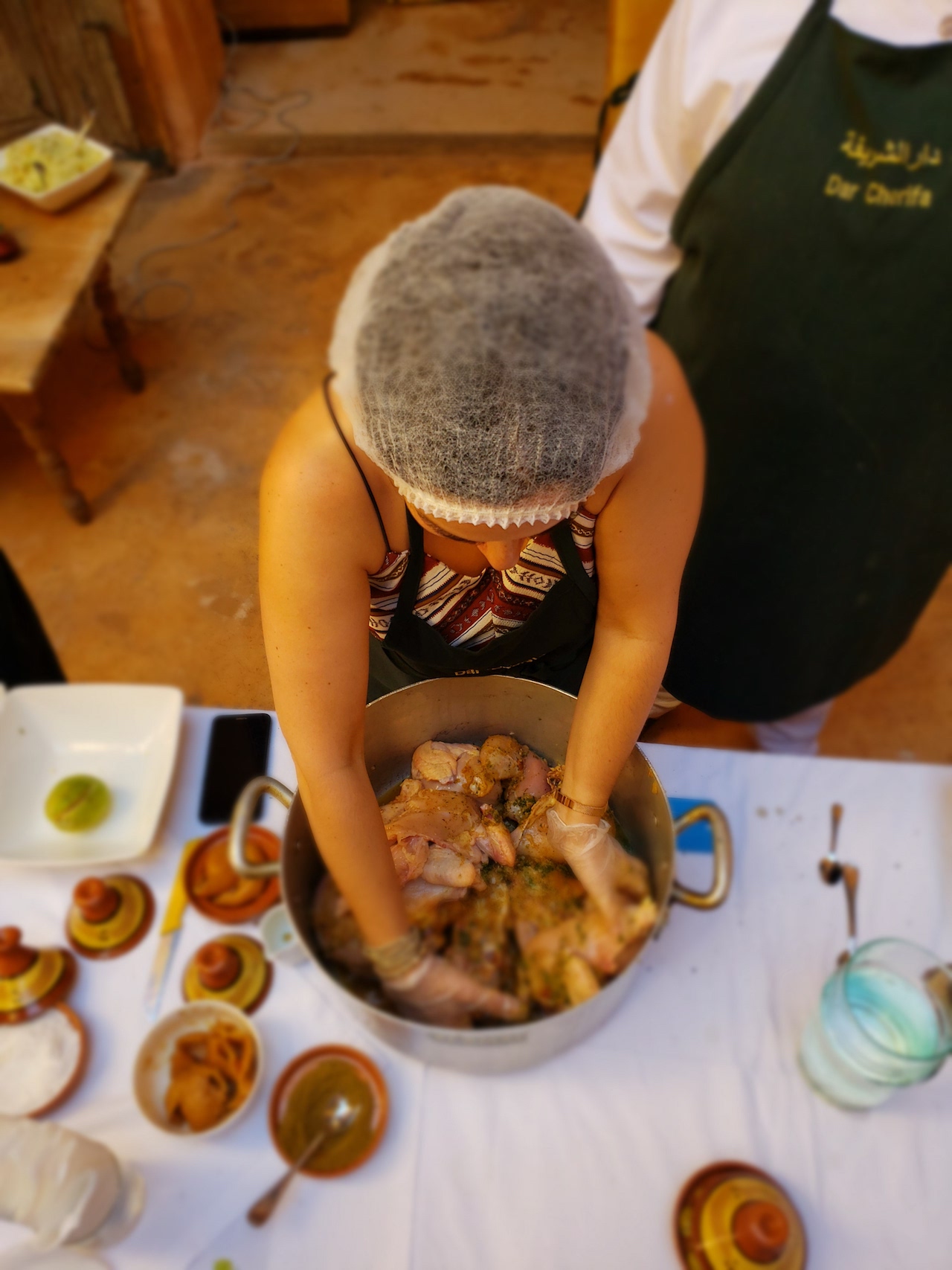 Tagine cooking is a method rather than a specific dish. Most tagines involve layering aromatics such as onions and garlic with meat, vegetables, spices, oil and a bit of water. Most tagine recipes won’t call for any pre-browning of aromatics and meat because all the ingredients steam and caramelize together. As the ingredients cook, the stew develops a deep and complex sauce that you can scoop up with bread or spoon over couscous.

The most popular Moroccan tagine recipes are often both savoury and sweet, and embrace the use of preserved ingredients. Think: chicken tagine with preserved lemons and olives, chicken and apricot tagine, and lamb or beef tagine with prunes. You’ll also find plenty of vegetarian options such as tagines with zucchini, carrots, peas and raisins. The spices are key and usually include saffron, ginger, turmeric, coriander, paprika and cinnamon.

If you’re using a clay or ceramic tagine, it should be seasoned before first use following the manufacturer’s instructions. To avoid cracking, the tagine should also not come in direct contact with the heat source, so if you have an electric stove or flat cooktop, you’ll need to use a heat diffuser with it.

Ready to start cooking? Here is a quintessential chicken tagine recipe from Dar Cherifa restaurant in Marrakech. (If you don’t have a tagine, use a Dutch oven or stainless steel pot, and add a little bit of extra water if it’s looking dry.) 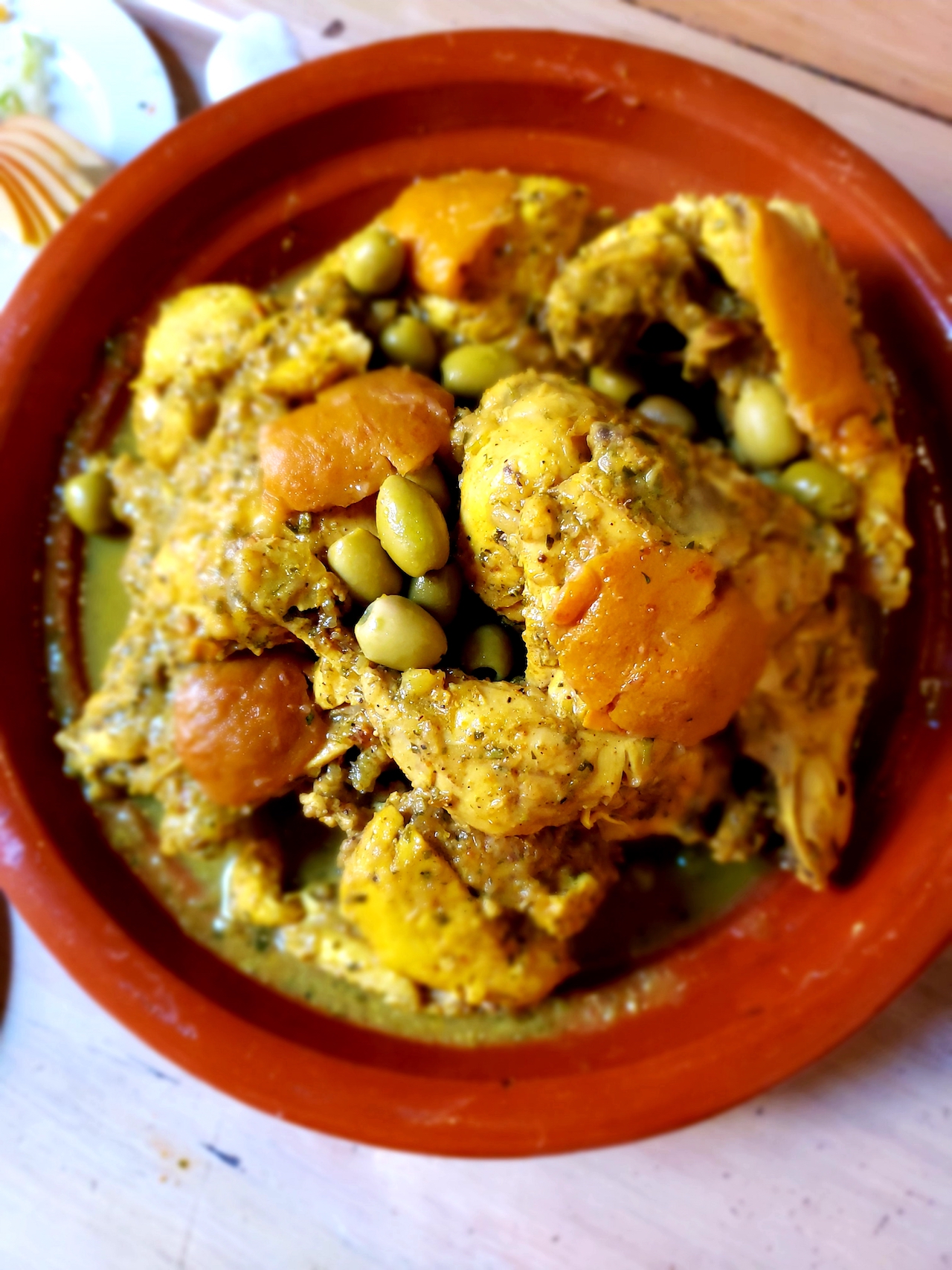 Claire Sibonney is a Toronto journalist who covers all things lifestyle, parenting, food and travel. She visited Morocco as a guest of G Adventures.