Searching For A Rare Pepper? Chances Are This Ontario Farm Grows It

How a family-run organic farm in Southwestern Ontario became a hub of hard-to-find sweet, savoury and super-hot peppers. 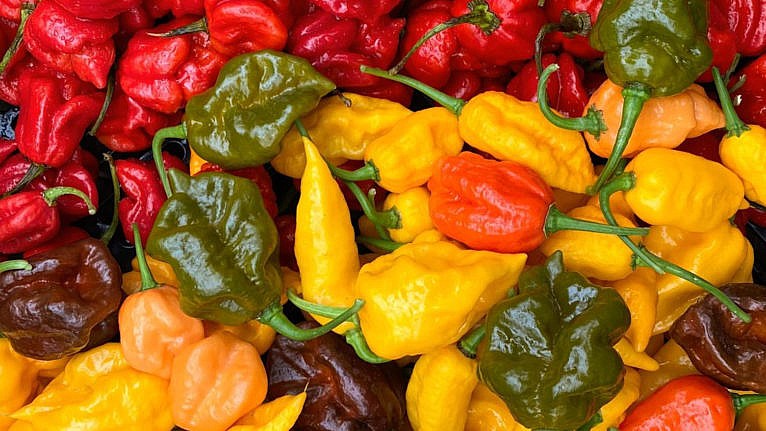 Image courtesy of The Spicy Side.

One of the reasons Bahar Salivar and her family moved from Oakville, Ont. to Toronto more than 10 years ago was for better access to the kinds of groceries she used in the recipes she grew up preparing and adoring in Turkey.

“Turkish people generally are obsessed with food,” she said. “You eat these foods starting from when you’re really young, so your taste buds are adjusted to this type of food. And then you don’t think about it; you are just always trying to find something that tastes like it.”

But even though there are plenty of Turkish, Lebanese and Middle Eastern stores in Toronto’s North York neighbourhood stocked with bulgur wheat, sumac and preserved goods, something was missing: fresh Turkish peppers, like the dolma variety often used to make stuffed peppers. Less moist and meaty than a bell pepper, dolma peppers retain their flavour and structure even after they’re roasted or deep-fried.

At first, Salivar bought sweet pepper seeds and attempted to grow them in her backyard garden. But the squirrels were too much to manage, so she gave up and started researching where else she might find them.

That’s how she found the Spicy Side, a specialty farm under the Chez Nous Farms umbrella in Stevensville, Ont., operated by organic farmer Shirley Ladouceur and her husband, Rick. In addition to selling hot sauces and a wide array of dried and fresh rare peppers from all over the world, each spring she also sells pepper seedlings to home gardeners who order them in early winter. Throughout the growing season, the farm grows plants on behalf of clients such as restaurateurs, home chefs and sauce makers who come to collect their goods in late summer and fall.

Ladouceur’s pepper obsession began in 2010, when she started growing popular varieties like jalapenos and Hungarian wax peppers to be included in the Chez Nous CSA basket. As her tolerance for heat grew, so did her curiosity about the massive number of peppers from around the world. She expanded her repertoire to chimayo, challuaruro and aleppo, and began sending them with Rick to the weekly farmer’s market. But the peppers took up a lot of space on the table at the market, and because Rick wasn’t as familiar with them, he found it stressful trying to sell them, not knowing how hot each variety was or how to prepare them.

Ladouceur experimented with a pepper-specific CSA, but customers were divided between those who didn’t want super-hot chiles but were curious about new varieties, and those who only wanted super-hots. That’s when a Peruvian chef approached Ladouceur about whether she could grow peppers for a restaurant he was planning. Knowing it was a risk but too excited to wait, she went ahead and grew the peppers he requested—but the restaurant hadn’t open yet, and so she found herself reaching out to restaurants and grocery stores to try to offload them. Eventually, through that outreach, she began establishing connections, and requests for peppers began to come in. Throughout the pandemic, the online plant sale and demand from home gardeners doubled Ladouceur’s revenues, and today she can just barely keep up.

“Peppers have taught me so much about other cultures and countries,” she wrote on Instagram after growing a Macedonian pepper requested by one client. “I am so proud when someone comes to my plant sale and discovers I have peppers from their country.”

Sourcing seeds from Ghana, Wales, Australia, Peru, Mexico, the southern states and beyond, Ladouceur’s selection is vast, running the spectrum from unbearably spicy to mild, sweet and ornamental varieties.

There are the extra super-hot chilis sought after by YouTubers, competitive pepper-eaters and hot sauce makers alike, such as the wrinkled, fragrant chocolate naga and the yellow reaper—a cross between the red Carolina reaper and the yellow Trinidad moruga scorpion pepper. There are less extreme, but still powerfully spicy peppers, too: flavourful South American aji varieties and Middle Eastern shattah peppers, similar in appearance to the Syrian Aleppo, which are used for paste and hot sauce. And then the mild and sweet ones, such as Barbadian bishop’s crown multi-coloureds and bright red Liebesapfel peppers from Germany. Each year, often on request from a customer, Ladouceur hunts down new cultivars, eager to discover them for herself.

There’s a long list of less extreme, but still powerfully spicy peppers, too, like the flavourful South American Aji varieties including Amarillo, Guyana and Fantasy. The Middle Eastern Shattah pepper, similar in appearance to the Syrian Aleppo, is used for paste and hot sauce.

A range of mild and sweet peppers like the Barbadian Bishop’s Crown multi-coloureds and the bright red Liebesapfel peppers of Germany round out Ladouceur’s offerings—although she’s happy to go hunting for just about any pepper a customer is looking for, so long as they’re willing to meet the minimum 25 lb purchase requirement.

Unsurprisingly, Ladouceur, who grew up in Canada, has gradually acquired a taste for spicy food—so much so, she doesn’t leave the house without popping a few of her favourite peppers into her purse in the likely event that a restaurant doesn’t have adequately hot condiments or accoutrements in-house.

“It is super interesting to me how multiculturalism has played into this,” she said. “I think for a lot of people who grew up in Canada, spice sort of hurts. At first it’s like, why would you want this? But now, this whole world has opened up.”

With friends and family on board to split the harvest, Salivar opted to order three Turkish pepper varieties to be grown in 2021: the long, thin tatli kil sivri, also known as the sweet sivri, which turn from green to red as they ripen and can be eaten fresh, pickled or roasted for side dishes; the sweet, juicy, red yalova yaglik, which are used both for pepper paste and roasted and added to salad; and the Turkish dolma, which can be dried for use over the winter or stuffed for both hot and cold dishes.

Salivar said the peppers were very much worth the wait—superior to any she’d ever had, because they were so fresh. She added the sweet sivri to salads and omelettes, pickling the leftovers for the winter, and the yalova and yaglik were also largely used fresh, although she made a sauce with them, too. For her dolma dish, she stuffed the peppers with rice, onion, herbs, spices, pine nuts and black currants before roasting them. Then she chilled them and dressed them with olive oil and lemon juice before serving.

“When you buy at the grocery store, they were picked up several days or a week before,” she said. “But Shirley called me at exactly the perfect time to pick them up. So I got them as fresh as possible. They turned out great. Delicious, very fresh, crisp. Amazing.”

Five more peppers worth the hunt

If you’re not within driving range of Southwestern Ontario, there are other specialty pepper farms like Ladouceur’s across Canada, such as Fat Chili Farm on Vancouver Island, B.C., as well as plenty of online seed sources—such as Seed Savers Exchange, Atlantic Pepper Seeds and Incredible Seed Co.—if you want to try growing your own. For cold climates, select faster-growing varieties. These are a few of Ladouceur’s most recent favourites grown at the Spicy Side.

Commercial production of the Guyanese wiri wiri nearly eradicated the smaller version of this aromatic, pea-sized pepper, but after a customer requested it, Ladouceur found seeds and grew them out. Now, she loves the wiri wiri so much, she has a bush growing outside of her front door so she can grab a few on her way out to stealthily add spice in restaurants. “You just squish it down with your fork,” she said. “So you just bring your food over and dip it in as you need it.”

A popular condiment in Malawi served alongside any meal of the day, kambuzi peppers are bright yellow, red and orange, pungent and similar in flavour to habaneros. Ladouceur uses them to make a thick hot sauce, adding Brazilian starfish peppers, green mango, bell pepper, garlic and lemon flavours.

Used by both Spanish settlers and Puebloans in New Mexico since the 17th century, the smoky chimayo pepper is named for the Tewa word meaning “flaking red rock” and was one of the first to capture Ladouceur’s imagination. Green and red, they can be eaten fresh, but are often dried and ground into a powder and added to sauces, soups and more.

With peppers that turn from purple and ripen to red, the American-made Purple UFO wins for beauty and can be eaten at any stage of growth, with its fruity flavour sweetening as it ripens. Used fresh or in sauces and powders, it’s also known for its staying powder: “It keeps forever and it basically dries itself just sitting on the counter,” Ladouceur says.

Native to Peru, the rocoto now grows in mountainous areas across South America, Central America and Mexico. It’s unique for its hairy leaves and purple flowers. And because they thrive in cooler climates, the rocoto continues producing in the greenhouse long into November and December. Not overly spicy but hot enough, Ladouceur recommends blanching them to soften the heat level.