Why Are Canadians So Excited About The Arrival Of Beloved U.K. Chain Pret A Manger?

Next year, Canada will finally be home to more than a dozen Pret A Manger pop-ups. 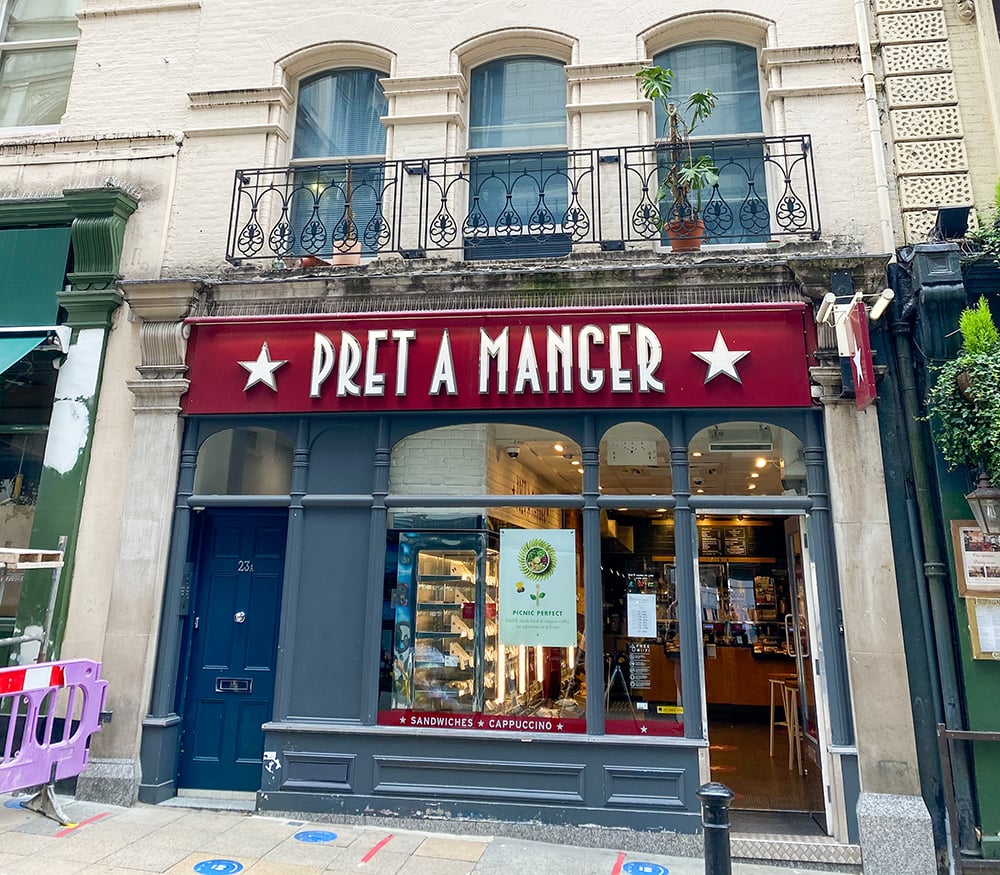 A Pret a Manger in Villiers Street, London. (Photo: iStock)

If you’ve been to the U.K., you’ve likely noticed the omnipresence of a particular chain. And no, it’s not Starbucks, which is surprisingly scant over here–it’s Pret A Manger. For context, when you stand outside the Bank tube station in central London, you’re just 10 minutes away from a whopping 25 Prets (as it’s fondly called).

Pret A Manger is a grab-and-go café, with organic coffee, freshly made sandwiches and a variety of healthy snacks. They’ve been expanding around the world for almost two decades now, with shops in Europe, across Asia and in New York. Canada has yet to be graced with its presence—but that’s about to change.

As a Canadian expat in London, Pret quickly worked its way into my daily life, as is the custom here. Pre-pandemic, it was my go-to spot for countless coffees and lunches, and it’s one of the first places I ventured to for takeout when restrictions were lifted. When the news broke that it was coming to Canada, my partner and I joked that it would make the eventual transition back to Canadian life a whole lot easier. “We can go back now,” he said.

Much to our delight, A&W Canada will open between 12 and 15 Pret A Mangers pop-ups in their current A&W restaurants in mid-2022.

“We think [Pret] will be a nice complement to our natural ingredients and our great taste,” Susan Senecal, the CEO of A&W Canada, told me over Zoom. “We think our guests will like the partnership and it’ll offer a chance to try something new in Canada.”

The stores we know and love in the U.K. are typically bright, open spaces, peppered with the burgundy-and-white logo. In the larger ones, there’s lots of seating, typically across two floors. Every location has refrigerated and heated shelves, lined with wraps, sandwiches, paninis, salads, protein bowls, mac and cheese, risotto, soup, yogurt parfaits, juices, kombucha, smoothies… the options go on.

The variety is a huge draw, and there are plenty of vegetarian and vegan options (there are even two standalone Veggie Prets in London). The ingredients are fresh, and every one—particularly allergens, are clearly laid out. There are few other places in London where you can get a latte in under 60 seconds. It’s all relatively affordable, too—you can get a full lunch for under £7 (about $12), a very reasonable total for a quick takeout meal in London.

A&W Canada and Pret are still in the early stages of planning the menus and the look and feel of the pop-ups. But Senecal assures me that it’ll be in line with what’s in Pret’s current standalone locations, just on a smaller scale.

That means it should be able to differentiate itself from Canadian haunts like Tim Hortons and Second Cup, likely with pre-prepared sandwiches, pastries and soups you can pick up off a shelf, then pay for with your coffee order at the counter. All of that will sit alongside A&W’s current offerings.

“A lot of people who have traveled and tried Pret elsewhere have enjoyed the taste and convenience,” Senecal said. “It’s fresh, and it’s got great natural ingredients, so there will be lots of times when people want to reach out and grab something from Pret.”

The plan with this pilot launch is to see how it goes for two years. If it is successful, A&W will get the exclusive rights to keep expanding Pret across the whole country. Pret seems keen to make the relationship work, too. They’re working towards doubling the size of their business over the next five years and launch in four other markets along with Canada.

“Everyone is really enthusiastic, whether that’s our franchisees or our guests,” Senecal said of the pilot. “We’ve had lots of buzz and chatter so I think we’ll have a great opening and a nice intro to the Canadian marketplace.”

As a London transplant, I’ll be genuinely surprised if the Pret pop-ups aren’t successful—it’s such a staple of daily life in the U.K.

“Go grab a coffee and a sandwich from Pret,” Senecal suggested as we said our goodbyes. I’m grateful that’s a habit I won’t have to break when I come home to Canada.