Move Over Matcha—There’s A New Tea In Town

Moringa is being hailed as the next big superfood, but does it live up to the hype? 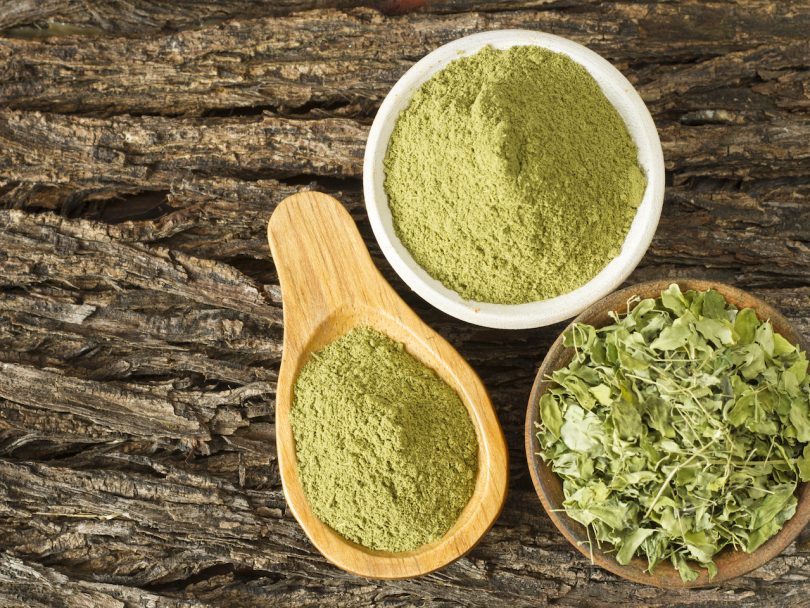 A decade ago, moringa was virtually unheard of in North America. Now, moringa leaf powder is popping up in health food aisles everywhere. It was even named one of the top culinary trends to watch for last year. Marketed as the next big superfood, it’s often called “the new matcha” and “the new kale”—and it’s starting to make its way into energy bars and snack foods. But does it live up to the hype? Before you rush out and buy some, here’s everything you need to know about moringa.

Moringa leaf powder is made from the leaves of Moringa oleifera, a small tree native to India. The tree grows throughout tropical and sub-tropical regions of Asia, Africa and Latin America, where it’s commonly called “drumstick tree” (for its long, slender pods) and “horseradish tree” (for the taste of its roots).

Almost every part of the moringa tree is used in traditional cooking and medicine. The seed pods, or “drumsticks,” are simmered in soups and stews, and the mature seeds are roasted like nuts or pressed to make oil. The flowers are tossed in salads, fried for a snack and brewed as tea, while the fresh leaves are cooked like spinach in all manner of dishes, from curries to omelets. But most Canadians are getting their moringa fix from dried leaves that are ground into a powder, which can then be mixed with food and drinks or brewed as an herbal tea.

How is moringa prepared?

You can bake with moringa, mix it with water or juice, add it to smoothies, sprinkle it into dressings or dips or add it to soups and stews. But the most common way to consume it is to make a tea. Add two teaspoons to a cloth or paper filter, pour boiling water and steep for five to ten minutes.

So, how does it compare with matcha?

At face value, moringa and matcha seem alike. They’re both green powders used to make tea, and both are super nutritious. But that’s where the similarities end.

For starters, they taste completely different. Matcha is complex and bitter, with floral undertones—an acquired taste, but adored by many tea drinkers. Because it’s so strong, people often add sweetener and make lattes with it. Moringa has a mild, earthy taste and goes down easy without adding anything. (Though you might want to add a bit of honey or maple syrup.)

Moringa is said to boost energy, but if you’re looking for a morning jolt, reach for the matcha. Made from the Camellia sinensis tree, it is a true tea, which means it contains caffeine. Moringa, on the other hand, is caffeine-free.

There’s also a difference in cost. Moringa is widespread and grows quickly and easily, whereas matcha is fussy and only grows in Japan. So, it’s not surprising matcha is the more expensive choice.

Is moringa actually good for you?

Despite moringa’s long history of use as a medicine, few of its purported health benefits have been studied rigorously. (There are reams of published papers extolling its virtues, but only a handful of these studies have used human clinical trials.)

But as the popularity of moringa grows, so does the evidence for its health benefits. Various studies have analyzed its nutritional content, and while the results vary depending on where it is grown and how it is prepared, moringa leaves are a good source of Vitamin A, Vitamin B6, Vitamin C, calcium, manganese, and iron. Moringa also contains an impressive array of antioxidants, which protect cells from damage and inflammation. And a recent human clinical trial found it can be used to maintain healthy levels of HDL (good) cholesterol and LDL (bad) cholesterol.

Still, if you’re pregnant or breastfeeding, consult your doctor before using moringa.

Where can I find it?

You won’t find a moringa latte at Starbucks (yet), but the powder is sold at health food stores and grocery stores. You can also find it online on Amazon.ca and Well.ca. There are dozens of brands of moringa, costing an average of ten cents a gram. A 200-gram bag typically costs between twenty and thirty dollars.