How Making Minestrone Helped Me Grieve My Nonna’s Death

"There’s an urgency to honour her by living more like her now, to connect with the deep respect she had for food and life." 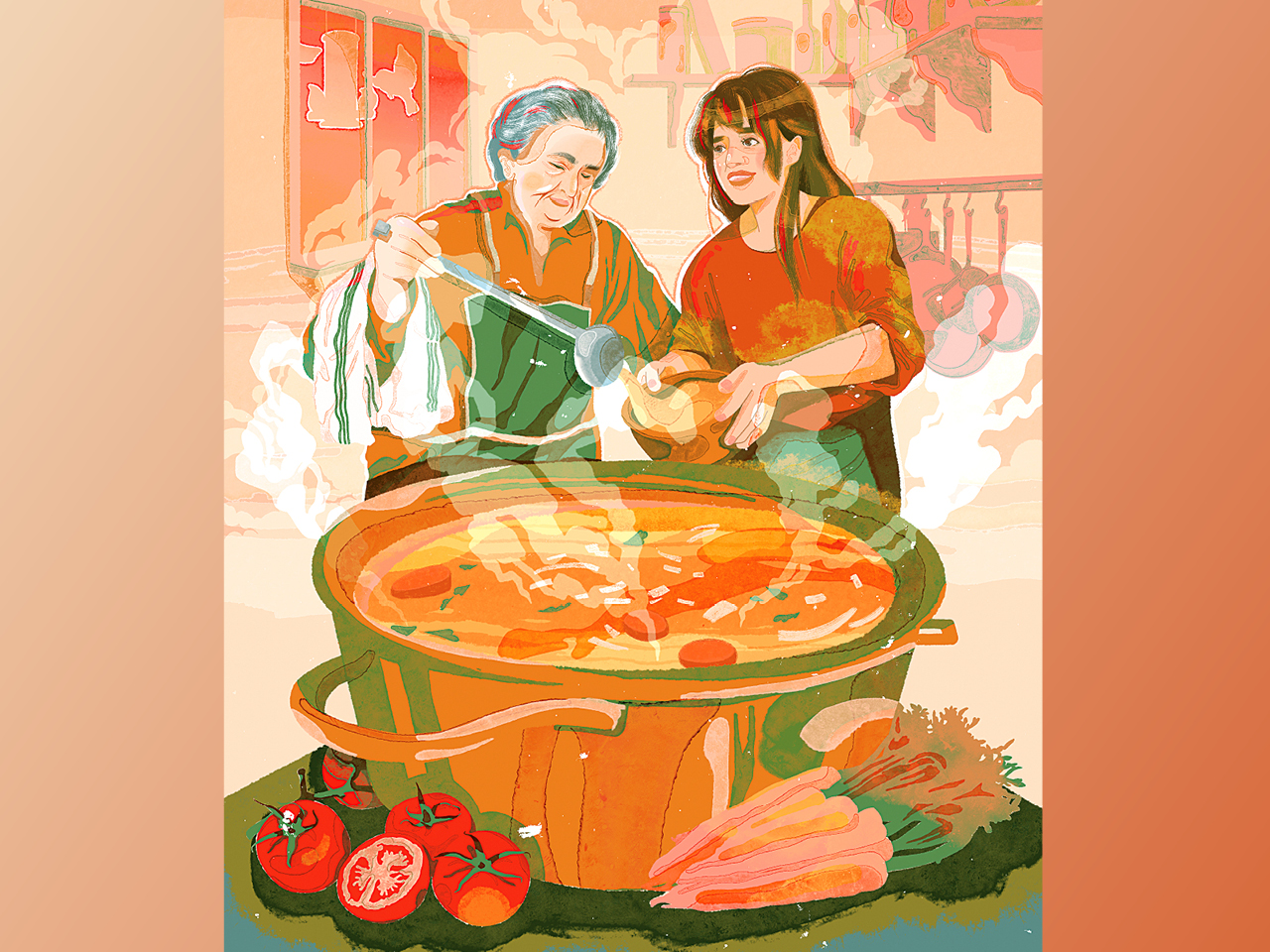 A few years ago, my cousin and I went to an Italian restaurant in Toronto and I committed the grave sin of ordering minestrone. The first rule of being Italian is never order a dish your nonna makes, mainly because of how mad she’d be that you spent $25 on it. We are the granddaughters of the peasants who invented or evolved many of your favourite Italian dishes out of necessity, due to poverty and scarcity. Among them: polenta, pasta alla carbonara, pasta e fagioli, spaghetti all’aglio, frittella, baccalà and, of course, minestrone. This type of cooking is called “cucina povera,” or “the cooking of the poor.” It’s simple, nourishing and enduring, just like my nonna.

Nonna Fanny’s guiding ethos was always “I no waste nothing.” She saved and reused everything, even individual yogurt containers, which found new lives as organizational cups and halved banana holders. She made single-use plastic bags last for years, and she even cleaned out old milk bags to reuse, because they were still bags, after all. We rolled our eyes at this, embarrassed by her old-fashioned frugality, but she didn’t care.

Nonna was a singular force that nothing in nearly 98 years on the planet ever changed—her eyes danced with fire and her scent was a mixture of pasta water, basil and Olay. Her backyard had a tiny path down the middle to a small shed that my childhood imagination made massive; it was flanked on each side by large garden beds. She grew all her own vegetables, had pear and apricot trees, and knew how to heal a stomach ache, an anxious mind or a headache with herbs. She yelled when she talked but tended her garden gently, bent over among the plants, until she was 95 and her osteoporosis demanded she rest. She fed her eight grandkids, and anyone else who stopped by, until we were at least three bites beyond full.

She died earlier this year because her aching body finally convinced her sturdy mind that it was time. I watched her funeral on my phone, sitting in the cold parking lot outside the funeral home. My cousins, sister and I drove to her burial in separate cars and looked on as she was lowered into the ground. Later, we put flowers on her coffin. It was more of a goodbye than many people got at the height of the pandemic, but it wasn’t enough.

Before she passed, I visited her in hospice, wearing full PPE. As I recited an Italian Hail Mary, she opened her eyes to join the prayer. She also gave me hell because I kept bumping into her bed rail, a final scolding for which I’m eternally grateful.

Grieving a beloved grandmother seems like it should feel soft, sad and sentimental, but I have yet to truly feel grief—or, really, anything other than the blur of day-to-day existence. Like many, I’ve been left exhausted and emotionally drained by the pandemic. How can I grieve for the one person who stood like a mountain in my life: immovable, strong and always home?

Instead of grieving, I try to cook like her. At first I did this unthinkingly. In the days after she died, I got up and went to the kitchen, pulled out a large pot and began to chop onions, carrots, celery and Swiss chard—all the vegetables I usually let wilt to ruin in my crisper—to make her minestrone.

Versions of this versatile soup have been around since ancient Roman soldiers ate minestrone for sustenance. Every nonna makes it differently and, aside from a few specific rules, minestrone is flexible and lenient. Nonna Fanny, less so. She was more like the terrain of her homeland. Her village was by Gran Sasso d’Italia, the “great rock of Italy,” the peak of which you could see from the streets she grew up in and the essence of which she had in her bones.

There’s an urgency to honour her by living more like her now, to connect with the deep respect she had for food and life.

Memories are never so necessary as they are when someone leaves. She’s not dead in my mind. She’s getting out a cutting board and telling me to grab an onion from the cantina. It smells like old wine down there. I come back and Nonna’s put a little plate of leftover meat on the counter for the stray cat visiting her backyard. Bunches of herbs—oregano, sage, chamomile, mint and thyme—are spread out across the dining room table, drying on a tablecloth in the autumn sun. Nonna’s looking out the kitchen window. The osteo hump between her shoulders is gone and she’s standing tall, watching the birds eat from her feeder. She grabs her favourite paring knife with the worn wooden handle, smiles at me and gets to work.