The host of YouTube's Hot For Food is on a mission: 'I want to take the word vegan back. . . . Good food is good food.' 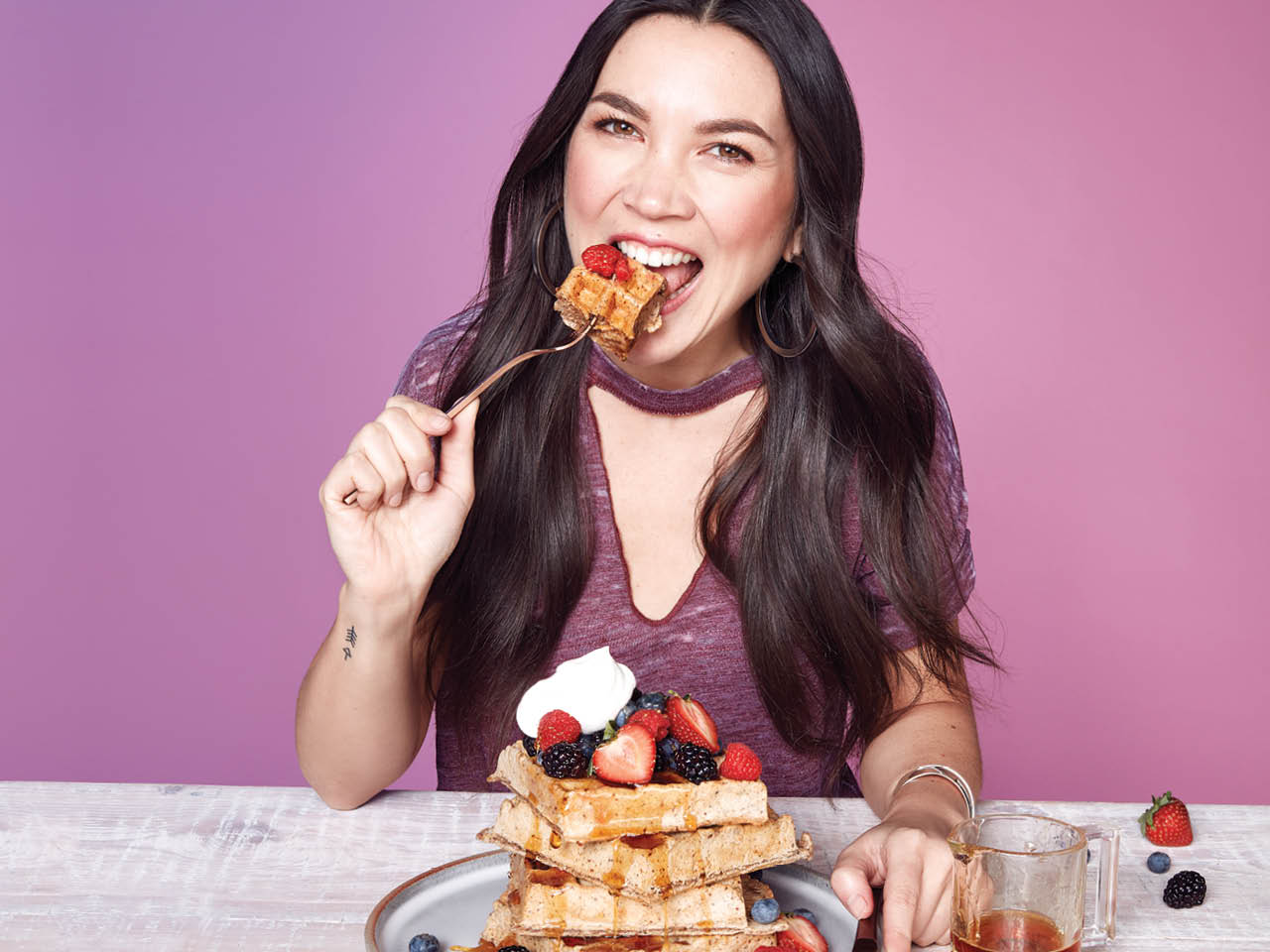 Three years ago, Lauren Toyota traded in her VJ gig at MuchMusic and took to YouTube with a simple proposition: Vegan food doesn’t have to be precious or pious — and it can taste really, really great.

She was onto something. Since then, nearly 400,000 viewers have subscribed to her channel, Hot for Food, where she whips up seriously delicious vegan pizza pockets, chocolate-cherry sundaes and mac and cheese.

Toyota’s accessible recipes make it easy to cut out (or just cut down on eating) animal products, whether you’re concerned about your health, the environment or animal rights. As she prepares to launch her first cookbook, Vegan Comfort Classics, Toyota talked to Chatelaine about her passion for plant-based food.

Were you always an unapologetic vegan?
When I first went vegan eight years ago, I was kind of in the closet about it. I worked in television, and it started to weigh on me that, as a public person, I wasn’t comfortable talking about something important to me. Hot for Food was born out of wanting to send a more palatable message about veganism: that you don’t have to feel less than, that there isn’t compromise involved.

The stereotype of vegan food is that you have to compromise on pleasures like comfort, indulgence and nostalgia.
We need all those emotions that food provides — I’m trying to show that you can get them with plant-based ingredients. There’s a whole spread in the cookbook on how to make a bacon substitute, so you can still have that salty, smoky, chewy indulgence. It’s the very first thing in the book! I have bangers and mash with homemade sausages. I have a Philly cheesesteak. Some vegans don’t agree with that approach. They don’t want me to call something chicken wings when it’s cauliflower wings. But I remember what this stuff feels and tastes like! I don’t like to use the word “fake,” so I’m going to call it cheese: You put it on nachos, it goes in your mouth, it’s cheese.

So for you, making vegan food is more about approximation — you won’t believe this isn’t chicken — than innovation — look what this broccoli can do?
I think people are really excited right now about using vegetables in new and interesting ways; when you go on social media, you’re bound to see plant-based dishes and recipes everywhere. But I like transforming food. On YouTube, I never say that a dish doesn’t have this or that: I say it’s going to remind you of eating chicken or cheese. The feedback I get the most is, “I never knew I could eat this on a vegan diet.” People think they have to give up everything that’s fun about eating and just live on soy, but my life has so much more variety since I’ve gone vegan. It forces you to expand what you eat. Yes, there’s a list of maybe 10 things you’re taking out, but you add in so many varieties of vegetables and plant-based proteins.

It feels like you can’t throw a carrot these days without hitting a new “plant-based” restaurant. Is that gentler phrase a way to rebrand veganism?
For sure. And I think people want to make the distinction that they’re plant-based, not vegan, so they aren’t asked about ethical fashion and cruelty-free beauty products. But I want to take the word “vegan” back. I want it to carry less rigidity. Maybe you still buy vintage leather, or maybe you still eat cheese once in a while. I can assure you I’m not a level-10 perfect vegan all the time, so let’s stop nitpicking and make it as easy as possible for people to access good food, make better choices and eat more plants.

So I should tell everyone I’m having them over for a vegan dinner party?
Well, as soon as you say that, everyone scrunches up their nose and is like, “I’ll just bring something extra so there’s meat on the table.” Make them my sausage rolls, bacon mac and cheese and Caesar salad, and don’t tell anybody what’s in them. Good food is good food.

Watch: How To Make A Creamy, Smoky Caesar Salad — Without Any Meat Or Dairy