I Binged All Of Netflix’s The Great Canadian Baking Show. Here’s What I Learned

10 kitchen tips from 3 seasons of the CBC series. 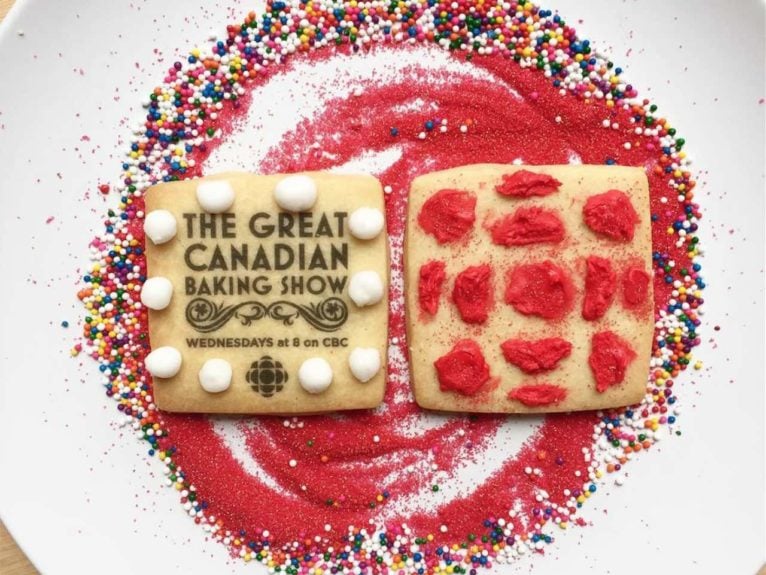 The Great Canadian Baking Show might just be my favourite series streaming on Netflix right now. Whether you make sourdough weekly or struggle through a boxed cake mix, CBC’s TGCBS is for everyone—all you need is a sweet tooth and a passion for slightly campy Canadiana (and former host Dan Levy’s excellent sense of style). Like the perfect dessert, it’s sweet without being cloying and provides a much-needed pick-me-up.

Based on the runaway hit series The Great British Baking Show (available on CBC Gem; you’re welcome), the Canadian edition is much tamer than its U.K. counterpart (hello, #BinGate 2014, in which a freezer mishap led one contestant to throw his baked Alaska in the trash), but it’s just as delightful. Set in a giant white tent to rival any kitchen inspo Pinterest board, the show sees amateur bakers from across Canada compete in three challenges, judged by pro pastry chefs Bruno Feldeisen, Rochelle Adonis (seasons one and two) and Kyla Kennaley (season three). At the end of each episode, one baker earns the title Star Baker, while another is eliminated. What are the contestants playing for? A glass cake plate and bragging rights—there no cash prize in sight.

Despite the low stakes, the show is endearing. Likable contestants who help each other out! Groan-inducing puns from the judges! A parade of delicious treats! In the two weeks or so it took me to watch all three seasons, I was not only incredibly entertained, but also inundated with baking inspiration and picked up some handy tips and tricks along the way. Here’s what I learned watching the Great Canadian Baking Show:

How to avoid the dreaded soggy bottom

Like many, I blind-bake my pie crusts because that’s what most pie recipes say to do. I don’t give much much thought as to why. Turns out, if you’re making a fruit pie with a soupy filling, it helps ensure the bottom stays firm and flaky, and not soggy (a soggy bottom is among the worst TGCBS crimes—besides a dry sponge cake.

In one technical challenge, in which all the bakers make the same recipe, the bakers were tasked with making Montreal-style bagels. One experienced bagel baker admitted to going rogue: he didn’t exactly follow the recipe. He ended up with sub-par bagels—flat and doughy—and a bottom-two finish. What I learned? Even if you’re trying a riff on your favourite recipe, read it through a few times and follow it as closely as you can. Tweaks here and there, and a pinch of overconfidence, can lead to less-than-tasty results.

How to make the perfect deep-fried doughnut

Oily doughnuts are no fun; if your Timbits wannabes end up greasy, one culprit might be over-proofed dough, when dough has been left to rise for too long. During Canada Week (season one, episode four), I learned that a well-proofed yeast doughnut floats when dropped in the deep fryer, and should have a pale band around its middle when done. Judge Rochelle said dough that’s over-proofed collapses when fried and absorbs oil in the process.

The secret to a silky, smooth cheesecake

Before watching TGCBS’ Canada Week in season one, I didn’t know much about tourtière (besides Chatelaine’s excellent recipe), but I learned a good one requires a decent amount of fat. Contestant Jude Somers also shared her trick for avoiding a runny filling: mix some rolled oats into the filling before putting your meat pie in the oven.

You can make custard in the microwave

I love custard and custard-based treats, like this banana cream pie and ice cream. But I hate making it. There’s just too much stirring. During British Week in season one, baker Linda Longson made custard for a trifle in the microwave. She told the judges she had always made it that way and it’d never curdled. Intrigued, I did some digging and apparently, it’s true: you can make some types of custard in the microwave. Dessert dreams do come true.

Bake sales might not be a thing right now, but when they’re back—or if you’re bringing treats to friends—Biscuits and Bars Week in season two has a simple, and glaringly obvious, trick for getting beautiful bars every time: chill them before cutting them into neat, tidy squares.

Don’t fiddle with your oven temperature

When my desserts are taking too long to bake, I sometimes crank up the heat. I learned in season three, episode four that this is a big no-no, especially for cake. If you’re impatient, like me, and turn up your oven temperature near the end of a bake, that inconsistency might lead to an unpleasant dark crust on the outside of your cake.

Baking along with the show? Send us photos of your bakes with the hashtag #GCBSbakealong 🎂 Get our recipes from our website [link in bio] #baking #canadian #cbc #battenbergcake #food #foodstyle

Baking pans are fans, too

Throughout the series, you see bakers fanning their treats with baking pans to try to cool them down. All of the challenges are timed, and they’re usually trying to speed things up—it’s hard to decorate a warm cake. The next time I start baking at midnight and want to put my treats away before bed, I plan to try the baking pan fan method.

Sandwich cakes are a thing

My favourite TGCBS challenge ever was in season two, episode three: bakers had to create a showstopper, something over-the-top that looked and tasted amazing. For Bread Week, they had to make a sandwich cake—not a Victoria sponge, but a savoury sandwich decorated like a cake, with some sort of icing and homemade bread to boot. The results were incredible: multi-tiered confection inspired by mall sushi, a cake filled with shawarma, and a giant muffuletta. This home baker says: challenge accepted.