At Ikea, I Found The Meaning Of Christmas—And Myself

Over a plate of meatballs, I began connecting to my ancestral identity and grappling with what it means to be Canadian. 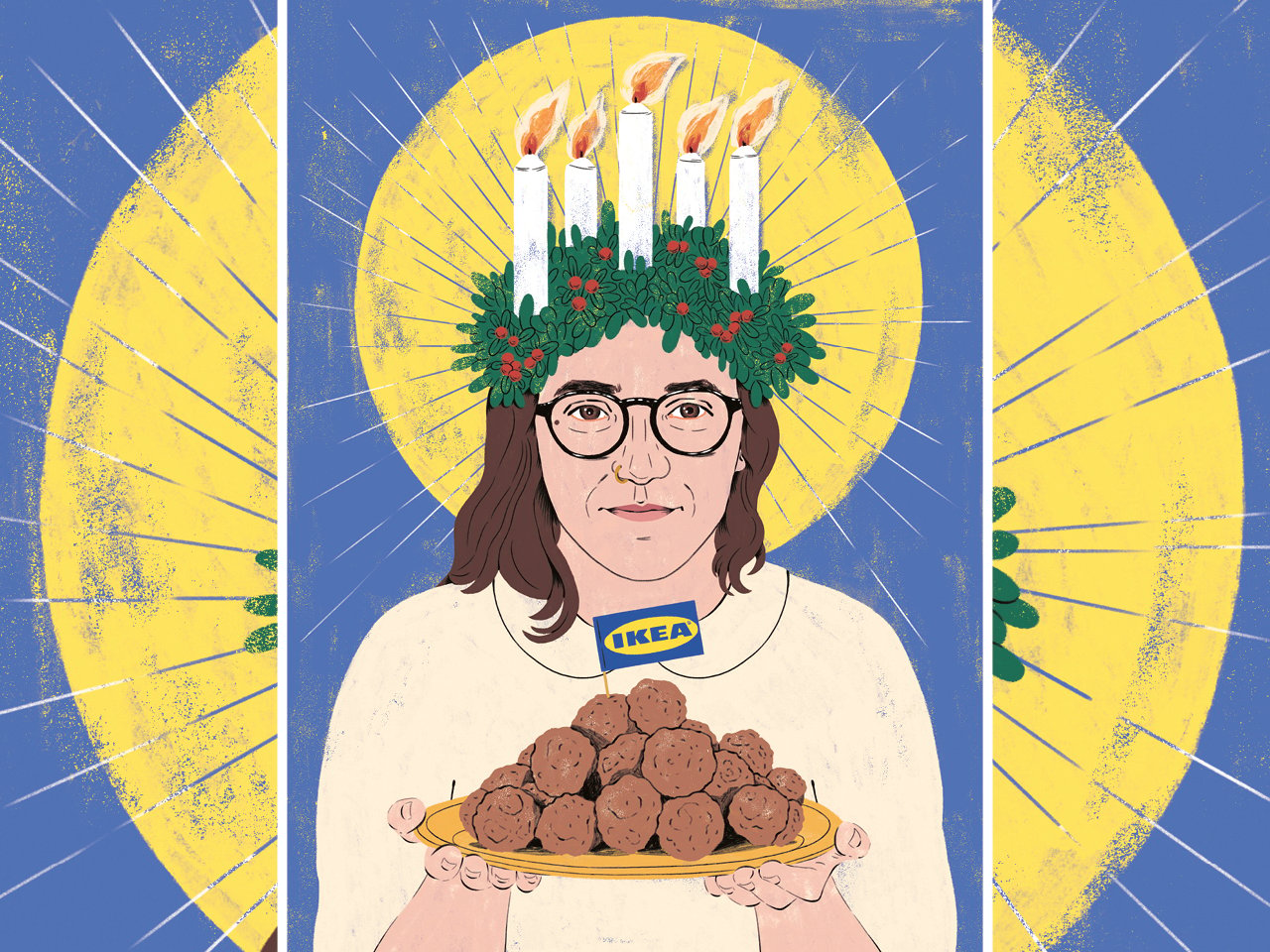 A few years ago, right before Christmas, I took a trip to Ikea—not to buy furniture, but to eat at the cafeteria. I had meatballs with lingonberry sauce, gravy, steamed vegetables, potatoes and a slice of Daim caramel cake. I’ve spent my adult life disconnected from my Swedish ancestry, foods and celebrations. For a long time, Ikea was my antidote.

The trip was a remedy for a particularly bad bout of Christmas blues. I had been home alone lying on the couch, limbs heavy with sadness, watching daylight fade into darkness. My partner and I had been talking about having kids and what traditions we wanted to pass on; now, the hidden grief of my loss of culture was surfacing. I have so little to share, I thought. After a good cry, I ventured out to Ikea two hours before closing on a Sunday.

Predictably, I ended up getting sucked into the rest of the store. I bought strands of tiny lights, gnome figurines, candles, napkins, frozen meatballs and candies. By the time I walked out, I had spent over $200 and resolved to serve a traditional Ikea meatball meal to 50 people at my upcoming solstice party.

My partner tried to be supportive, though they did wonder where we would store all the stuff when Christmas was over. I had no patience for such practicality when the salve of consumerism was working on my grief. By the time I went to bed that night, our apartment looked like a Scandinavian winter festival.

I am a second-generation immigrant on my father’s side. My Swedish grandparents, Erik Yngve Vikander and Ingrid Maria Vikander, were from the town of Smedjebacken. The family—two parents and four boys—came to Canada in 1954, when my dad was about eight. Eventually, my father’s youthful exploring brought him out west, to Vancouver.

I grew up mostly estranged from Swedish culture. My dad tried: He took my sister and me to cultural events, like the local Scandinavian Midsommar festival, held in June. Once, we went to a Sankta Lucia event, a festival of light celebrating Saint Lucy, an early-4th-century martyr who brought food to Christians hiding from persecution in the underground catacombs of Rome.

According to legend, she wore a wreath with candles on her head so her hands would be free to carry as much food as possible. In modern-day Sweden and its diaspora, children re-enact the journey through processions. The girls wear white dresses and wreaths with candles on their heads. The boys dress as star boys, their white robes and pointed white hats decorated with stars representing the cold clear nights of winter.

I usually felt like an outsider at these events. I didn’t have long blond braided hair; I didn’t speak the language, sing the songs or know the dances. The only place I felt connected to my culture was at Ikea, its giant blue and yellow sign forever imprinted on my mind as a place of comfort and connection.

Until I finally made it to Sweden, at age 11, Ikea was where I felt closest to the motherland. We would eat meatballs, play in the ballroom and look at the bed frames. No one spoke Swedish there, so I didn’t feel left out, and I even felt a sense of ownership. No matter what, my claim to Ikea was always stronger than that of my friends’ or anyone else in the store. It was the only part of my life where I felt confident of my Swedish identity.

As a white person, my ethnicity is invisible. Swedish culture isn’t particularly celebrated in Canada, but it’s also not oppressed. Unlike many of my Canadian-born Chinese friends, I was never teased at school for my race, culture, food or language. There was no need for my family to counter negative experiences by celebrating traditions at home or teaching me about my ancestors.

And, like most children of immigrants, I didn’t learn that my family’s decision to move to North America was a result of the colonization of the so-called “new world.” Where I benefit, others have suffered. As a kid, I understood my cultural identity to be “Canadian.” As an adult, I know that’s only half the story.

“Unless you’re Indigenous, everybody’s come from somewhere else and that’s an important truth that we don’t talk about in this country,” says Ginger Gosnell-Myers, the first Indigenous Fellow at Simon Fraser University.

Knowing who their ancestors are helps Indigenous people shape their identity, says Gosnell-Myers, who studies decolonization and urban Indigenous planning. Non-Indigenous Canadians miss out when they don’t know where they’re from—what’s more, the term “Canadian” contributes to erasure by neatly subsuming hundreds of different Indigenous nations.

“The term ‘Canadian’ erases the importance of cultural identity. It’s homogeneous, meant to be inclusive I guess, but actually diminishes our ability to value culture in all its forms,” Gosnell-Myers says. She says that learning about my ancestors—the good and the bad—is part of the very important task of disrupting my Canadian identity. “There’s a lot of lessons in decolonization but it always starts with one’s self,” she says.

The truth is, I’m a Canadian settler by way of England and Sweden. I live on the unceded and occupied territories of the Musqueam, Squamish and Tsleil-Waututh First Nations in a city often called Vancouver.

Admittedly, eating meatballs in a furniture store is an embarrassingly superficial way to connect to my ancestral homeland. But Gosnell-Myers says food is a good place to start. When settlers learn about their own ancestral food practices, it may give them a springboard for understanding the Indigenous histories in Canada. And even as we enter another season in the pandemic, the importance of my trips to Ikea’s cafeteria surprise me. A lunch there is the only meal I have eaten at an indoor restaurant.

I ended up spending the first two hours of our solstice party alone, twirling around in my tiny kitchen. The party was a success, but I won’t do it again—at least not until I have more space and at least three helpers. And anyway, I’m moving beyond meatballs. I have been learning more about the badass martyr Sankta Lucia and plan to learn and sing the Swedish songs that celebrate her. But of course, I will always cherish the Ikea cafeteria.