This Is How You Make A Vegan Potato Salad That's Tangy, Creamy And Straight-Up Delicious

Lauren Toyota offers three secrets for getting it just right.

Just because her diet is plant-based, that doesn’t mean hot for food blog’s Lauren Toyota eschews comfort food. In fact, she couldn’t live without it.

For Chatelaine’s video series, Vegan It! with Lauren Toyota, the former MuchMusic VJ and current YouTube star and cookbook author, demonstrates how to create vegan versions of everyone’s favourite comfort classics — like grilled cheese and caesar salad — without elaborate recipes or compromising on taste. 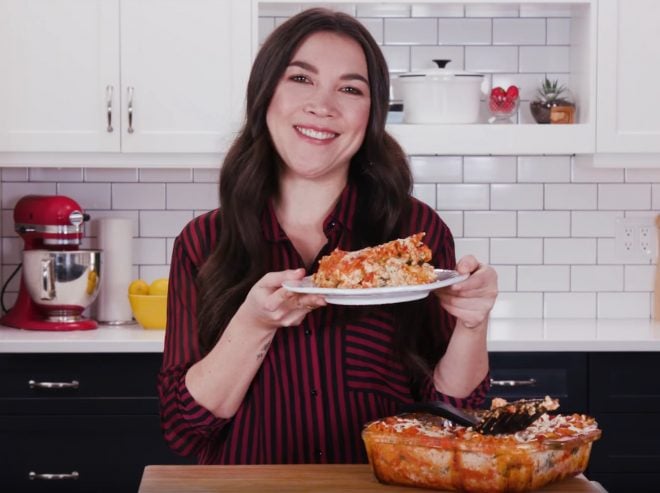 Vegan Lasagna! How To Make This Classic Dish Without Meat Or Cheese

Lauren tosses together a hearty, creamy and savoury vegan potato salad. Here are her tips for:

Instead of boiling red baby potatoes, Lauren roasts them in the oven and lets them get all brown and crispy. This adds rich, caramelized flavour as well as a nice, crunchy texture to the salad.

Eggs are the main ingredient in mayonnaise, but there are plenty of vegan mayo alternatives on the market, including one by Hellmann’s. Lauren makes a creamy salad dressing with vegan mayo, Dijon mustard and classic pickle relish for tang as well as diced celery and red onions for added texture.

No BBQ-worthy potato salad is complete without smoky bacon. Since pork products are off the table for Lauren, she makes crunchy bacon bits by marinating coconut flakes in a mixture of soy sauce (tamari works too!), liquid smoke and smoked paprika and then baking it all until extra crispy. She suggests making the bacon bits in advance since they’ll keep for months when tightly stored at room temperature.

Watch: How to make a vegan caesar salad