A Guide To Emotional Baking

The holidays are stressful. Luckily, there's always the option of eating your feelings away. 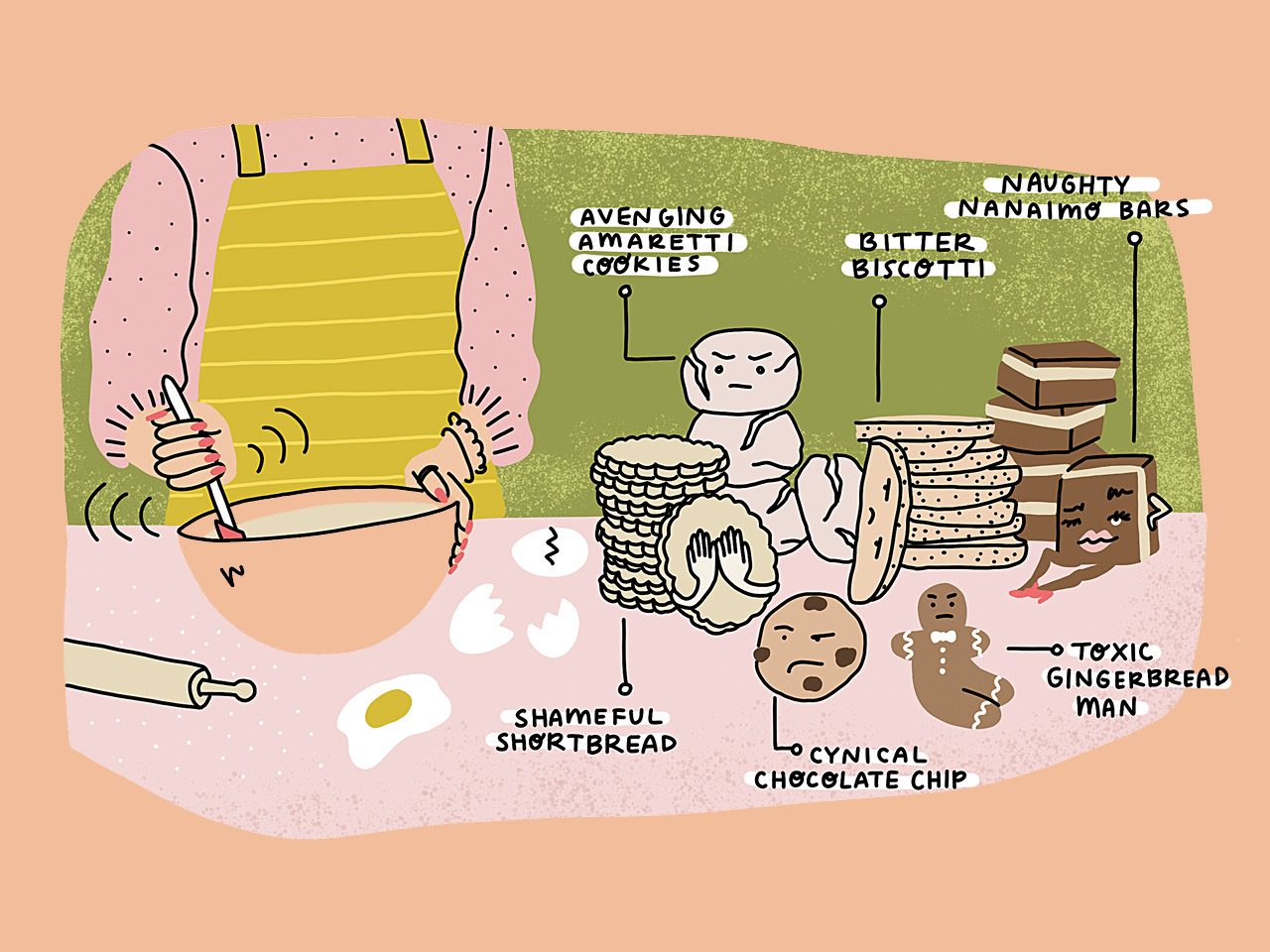 Although this is meant to be the most joyful time of the year, you may find guilt, bitterness, anger, sexual frustration and a clogged chakra or two are preventing you from experiencing maximal cheer. It’s time to let those feelings go, by eating them.

It’s been one year since you turned your camera off to aggressively pick your nose during a company-wide Zoom meeting, which means it’s been one year since your office bestie, Tara, messaged to tell you that your camera was, in fact, still on. Add 1 tbsp of butter for each day you’ve held on to your shame. Mix with as much sugar as feels right. Form into balls and bake for 10 min. Add to a blender with rum. Blend. Drink. Let it go.

Remember when you were passed over for a promotion in favour of fast-talking Rob, who winks at you during one-on-one meetings and calls everyone “girl” and “bro”? Think about him as you mix together butter, flour, molasses, ginger, cinnamon, allspice, brown sugar and Ex-Lax. Bake. Stab eyes and buttons with a toothpick. Mail to Rob on behalf of women everywhere.

For some reason, you agreed to make cannoli for your family Christmas, even though you’re the busiest person in your family and no one ever appreciates anything you do. Make the most perfect goddamn cannoli any Italian has ever tasted. And wait. Wait for that one uncle, who’s guaranteed to say, “Mamma made it better.” When this happens, stand up, take the cannoli from his hand and crush it in yours while maintaining eye contact.

It’s been a hell of a sexually repressed few years. Combat this by putting on lingerie and slathering yourself in Nanaimo layers. Lick off while staring at yourself in a full-length mirror. Rarr.

Mix together pecans and honey in a bowl, then chuck the entire thing at your neighbour Doug, who keeps letting his dog shit on your lawn. The dog will surely enjoy eating the pecans off the ground, and that’s okay, because he is not the one to blame here.

First, think about your ex, for whom you missed Christmas Dinner 2018 because he had to see Avengers: Infinity War the day it was released. Next, make amaretti cookies and set aside a tumbler of amaretto. Drink it while the cookies bake and think about texting your ex to say how much better off you are without him. Instead, put on some lipstick, dab a little almond flour on your nose and post a baking-beauty thirst trap.

Channel your sour feelings toward Santa into the best choco chippers of your life. Eat them all while wrapping gifts, because you’re the one who makes the magic happen in this house, dammit.

Follow Lidia Bastianich’s classic recipe while ruminating on your enemies, but give the cookies to your real friends in cute li’l tins. Happy holidays!