This New Cookbook Is A Love Letter To Palestinian Food

"People tend to talk about Palestine in the past tense," says Ottolenghi co-founder Sami Tamimi. Falastin, the new cookbook he wrote with Tara Wigley, sets out to show how Palestinians eat and live today. 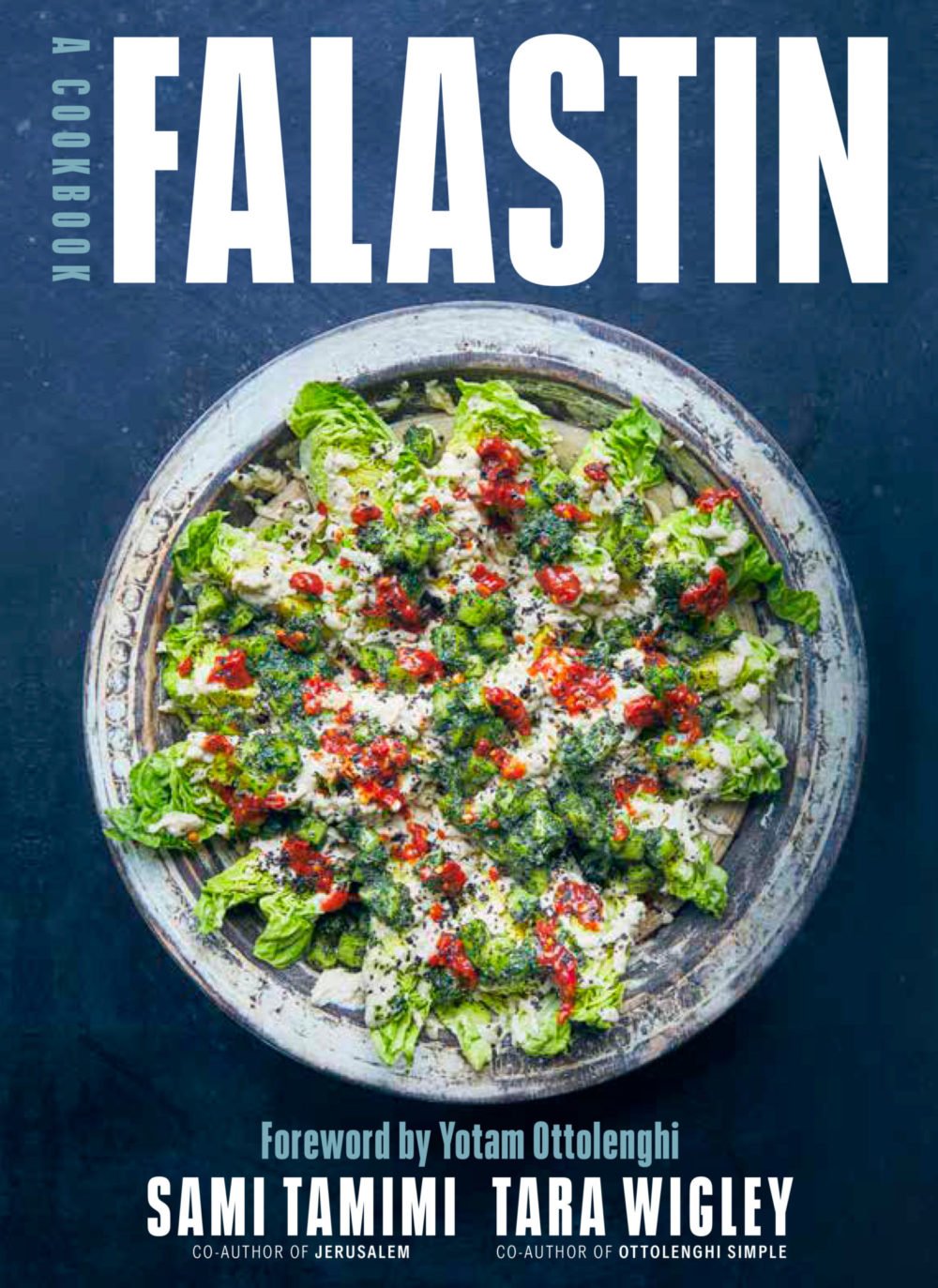 Whenever I get a new cookbook, I like to look at its parting photo, the image on the last page. Some of my favourites use this space to make a statement, or have saved the best for last: a fresh sprig of curry leaves, a bowl of blood chocolate ice cream, a cook salting down her cutting boards at the end of a shift. The last image in Sami Tamimi and Tara Wigley’s Falastin, out this week, is of two boys bouncing a ball off the West Bank Barrier, an eight-foot wall that separates Israel from Palestinian Territory. And then there’s the jacket flap: a head-on shot of a vegetable market. Politics and the pantry are deeply intertwined in this book, which Tamimi had been thinking about putting out into the world after publishing Jerusalem with his longtime business partner, Yotam Ottolenghi.

Tamimi grew up in East Jerusalem, worked in Tel Aviv and West Jerusalem kitchens and, in his twenties, moved to London where he met Ottolenghi—the best-selling cookbook author, chef and restaurateur—while working at London café Baker & Spice. The restaurant empire they’ve built in the two decades since is world renowned for its inventive employment of Middle Eastern flavours and food.

Palestinian cuisine hadn’t quite reached the same level of global recognition as something distinct from the wider umbrella of Middle Eastern until recently. Falastin (named as such, Tamimi explains, as Arabic has no letter p in the language) comes at a time when, at least in the West, Palestinian cooking is getting long overdue credit as a distinct cuisine, imbued with history and people’s connection to the land and the produce it grows.

I spoke to Tamimi and Wigley, a longtime cookbook collaborator with Tamimi and Ottolenghi, about the book’s hybrid nature, the nostalgic and modern qualities of home cooking, and writing what Tamimi calls “a love letter to home.” But first, they want to know: which dish did I like best from the book?

I think it’s a toss-up between the chicken musakhan [chicken roasted with sumac, allspice and pine nuts] and the meaty vine leaf pie. They’re both delicious, but the second takes something that’s otherwise time-consuming—rolling up individual vine leaves—and turns it into something closer to a casserole.

Tara: It’s such a good example of what the recipes are trying to do. Taking the traditional dishes and the essence of them, but always having the home cook in mind. It’s a bit of a short cut.

Sami: It also looks much more impressive, the way we’ve done it in Falastin. With a couple of salads and dips on the table, it’s just a showstopper. And you can have it hot, and the next day room temperature.

When developing these recipes, on a spectrum of showcasing traditional preparations to contemporary takes, where does this book fall?

Sami: A lot of the Palestinian cookbooks already available on the market are very nostalgic, in a way. A lot of traditional recipes, which is what I wanted to start with. I wanted to do justice to that food, because it’s connected to Palestinians themselves and their connection to the land and their food. But my cooking style is a little different, and we didn’t want to do another book that existed in the market.

But also, the whole book takes place in modern Palestine. People who live there now. People tend to talk about Palestine in the past tense. We wanted to bring it back to life and enjoy the fact that it still exists and people are still eating and falling in love and have all the modern experiences.

Tara: I also think that it still has definitive Palestinian dishes. For people new to the cuisine and come to this book, the takeaway would be these knockout dishes. The upside-down cake, the chicken mousahan.

I read in a previous interview you did that many of the Palestinian cookbooks currently in the market are written by women.

Sami: Women, mostly cook at home; men don’t. It’s a culture that has been handed from mother to daughter through generations. Me, writing a cookbook…Tara was the new eye in the book. Me as a man, it’s just kind of different.

Tara: I didn’t realize until I went to Palestine, what a big deal this was. Every single cook at home, as Sami says, is a woman. I think it’s amazing and easy to underestimate that here’s a Palestinian man who is largely teaching the world how to cook Palestinian food is a powerful thing. He was shushed out of the kitchen as a boy, but he stayed in the kitchen ever since, and he’s still there.

You’ve said that you’d like Falastin to be officially translated into Arabic. What would that mean?

Sami: It’s almost like the cherry on top of the cake. It was a dream of mine, if I ever did a cookbook, I’d like for it to be in Arabic. Most of my family will be able to read it properly.

It’s also meaningful because…with the Ottolenghi cookbooks, and their connection to Israel, a lot of people think that Ottolenghi is an Israeli company. But the variety and diversity of staff, and me being part of the company as well, people tend to normally choose sides. Because of that Ottolenghi cookbooks don’t typically get translated into Arabic. It’s almost like a black market, where they smuggle books to countries.

Tara: I also think there’s something to be said about the fact that a lot of these recipes are still handed on orally. The culture of cookbooks is just not the same as outside of Palestine. It’s not a reason not to do it, it’s just not the kind of market you’d see in the U.K. and the U.S.

How would you describe the partnership in writing this book together?

Tara: We’ve been working on our baby for over two years, and have been together every day and have travelled to Palestine three times. The whole time I’ve seen things from such a different position. This book was Sami’s love letter home; it was my adventure into a new cuisine. I’m a mother, a home cook, not a professional chef, background mostly in words and storytelling. And Sami’s a professional chef. That provided a really good energy for the whole book.

A large component of this book isn’t recipes, but profiles. Of neighbourhoods, activists, a particular group of women who make yogurt a certain way.

Tara: We had a moment a few months in when we realized that we didn’t want to tell one story, or just Sami’s story. That what we wanted to do was just show lots of different windows of Palestine today. And to convey the sheer paradox of everything; it’s not all hopeful, it’s not all hopeless. It’s both of these things. Having these windows into the life Palestinians live today, and the culinary enterprise and acumen and deliciousness happening, in some cases, under grim set-ups. It really freed us up that we weren’t telling one story.

Sami: And these are stories from people who live in the area, and we want you to read more, hopefully, want to know more. When people hear the word “Palestine,” it can conjure up negativity. We hope with Falastin people will want to know more and read a lot about what’s actually happening there.