Can You *Really* Make Good Beer At Home? I Tried It

After trying my hand at a quarantine sourdough, I decided to ferment something else. 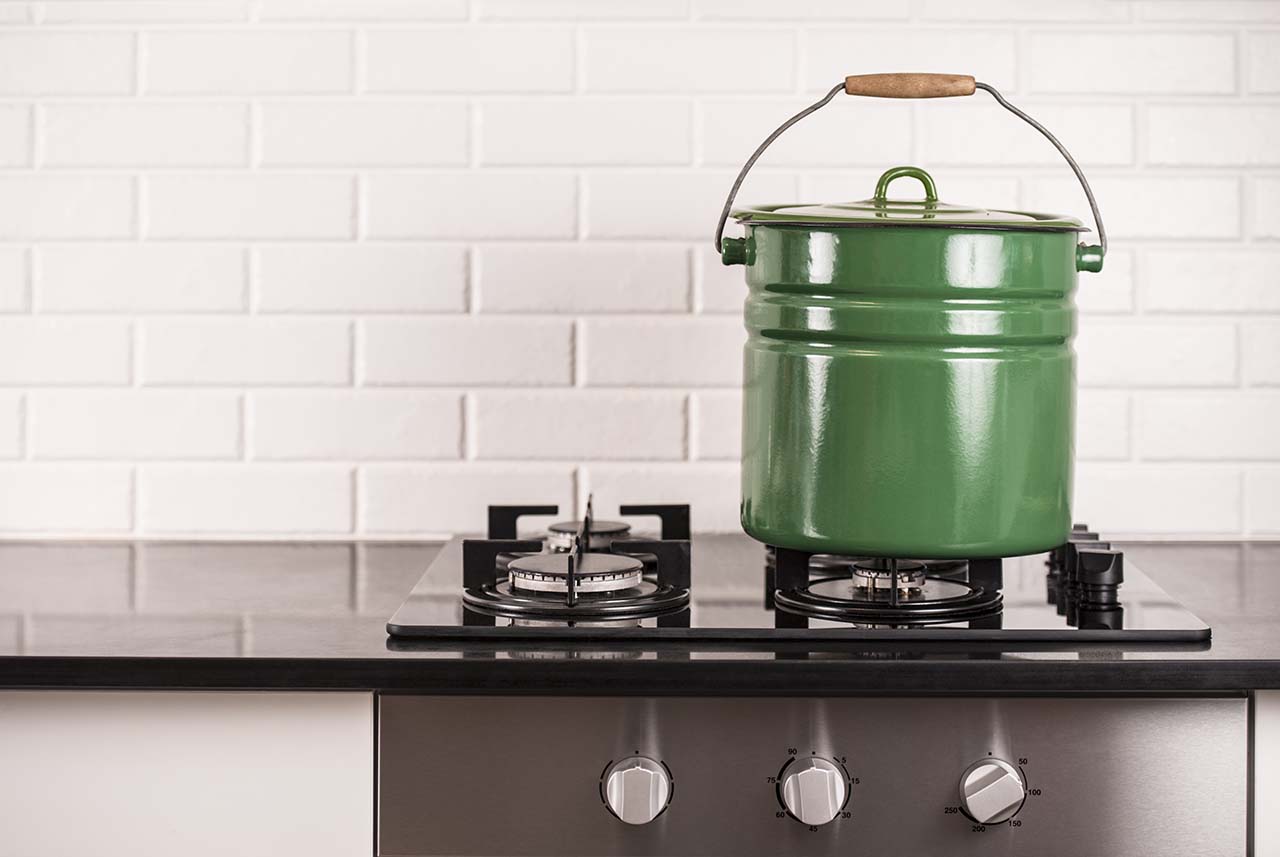 After few months into the pandemic, my roommates and I had tried just about everything. We tried sourdough. We played Animal Crossing and Stardew Valley. We tried pickling everything. It felt as though we had exhausted every time-consuming quarantine activity out there.

Enter: homebrewing. My roommate ordered a brew-in-a-bag starter kit for $40—a big box filled with all the essentials to start a simple homebrewed beer, including a pre-made, ready-to-go hopped malt extract (which cuts down on brew time since you don’t need to steep or boil the grains, you just need to add water and yeast). It was basically the box-cake equivalent of a homebrew. After brewing, bottling and fermenting for weeks, the final product was surprisingly good: a nice light beer with plenty of bubbles and a pleasant malt aftertaste.

We were hooked. We ordered the more DIY stuff: yeast, malt extract, hops and whole grains that we had to boil. Our 30-minute brew session turned into a Saturday afternoon of sanitizing tools, boiling grains, stirring and measuring temperature. We followed all the steps that were given to us with our package of ingredients, starting with steeping the grains in water and bringing our water to a boil. As the water boiled, we added our malt and hops in carefully timed intervals. We let it cool before pouring it into our fermenter, a glass carboy (or jug) with a twist-off lid to release gas. We filled up the rest of the carboy with water and added yeast. Then, we left it in a cool corner to do its thing for two weeks. Once it was fermented, it was time to bottle: we sanitized plastic bottles that we had collected, poured in our beer, added sugar, capped the bottles and left the beer to carbonate.

Though it was a lot more involved than the brew-in-a-bag, it was also deeply satisfying to end the day with five gallons of almost-beer beginning its fermentation in a cool corner of the apartment. For about $40 with shipping, we made five gallons of beer, or about 54 350-mL cans—which works out to about 75 cents a can. So, if the average can of beer costs $3, we saved almost $120.

As fun as our brew day was, we definitely made some easy-to-avoid mistakes (I’m convinced we added the hops too late). I asked a couple of homebrew experts about the art of home-made beer. Here are some tips, from the real pros, on how to get started on your own homebrew.

Start with the right tools

Every beer has four basic ingredients: water, yeast, malt and hops. Aside from that, there are a few important tools you need to get started. According to Zack Weinberg, Chief Barley Officer at Toronto Brewing, a homebrew supply store, the basic things you need are a big boiler (a large pasta pot will work), food-grade sanitizers for all your materials, surfaces and hands, a fermentation chamber (such as a big bucket or a carboy) with some sort of lid, thermometers to measure your grains’ temperature as they boil (a meat thermometer works) and airtight bottles to let your beer carbonate in (plastic works). Luckily, we had a lot of these tools from our original beer-in-a-bag kit (which came with plastic bottles and sanitizing solution we didn’t finish) and we were able to use things we had at home for our brew day (we used big pasta pots, a meat thermometer and other kitchen tools for stirring and measuring). All we bought for this batch was a glass carboy to use as a fermentation chamber. If you’re looking to get started on your own homebrew, take stock of what you have in your home. You might be surprised how many of the necessary tools you already have.

There are a lot of different places where you can buy these tools. Toronto Brewing, for example, sells starter kits with all the essentials. Grain to Glass in Winnipeg also sells homebrew starter kits and ships nationally. For people on a budget, there’s no shortage of second-hand equipment on websites like Kijiji and Craigslist, or Facebook Marketplace.

This is *the* most important part of brewing your own beer. “Basically, you’re brewing wort, which is like a big sugary soup, and the yeast will eat those sugars. But other bacteria want to eat those sugars as well, and that will just make your beer go bad,” explains Sara Yong, homebrewer and co-founder of Silly Sir Brewing Co in Toronto. “After your boiling, it’s really important to keep everything super sanitized and clean, including your hands and all the equipment you’ve touched because you don’t want to spend all that time just for an ineffective batch.”

Yong suggests using Star San, a food-grade sanitizer that can be bought at a variety of online retailers. She also suggests filling a spray bottle with the cleaning solution and using that to clean your tools, hands and surfaces as you go.

Made a mistake while you’re brewing? “Write everything down in case of a happy accident, like, if you boil for twice as long, it might turn out really, really good,” says Weinberg. “Just make sure you write it down so you remember everything you do so you can adjust things for next time.”

When you’re first starting out, sticking to a kit with pre-measured ingredients is a safe bet. But once you have more experience and you want to venture into making more unique brews, it’s a good idea to do some research into exactly what each component of beer does for the brew. According to Lauren Richard, a Toronto-based beer educator and Advanced Cicerone®, something like when you add your hops, for example, can affect the final product a lot. “If you’re adding hops at the beginning of the boil, you’re extracting a lot more bitterness than if you’re putting them in at the end, when you’re going to get a lot more aroma and flavour,” she says.

Richard suggests books like Tasting Beer by Randy Mosher and How To Brew by John Palmer to learn about ingredients, the brewing process, alcohol content and anything else you’d want to know before creating your own custom brew.

For first-timers, Weinberg and Yong both suggest starting with something darker and a little more flavourful, like a stout. “[Start with] something that’s not super clean,” says Yong. “Since it’s less clean, there are more opportunities to hide off-flavors and things like that. If you’re trying to make a lager or pilsner it’s really easy to spot [mistakes].”

Get involved with a club

Not only is homebrewing a fun hobby, but it’s also a great way to meet other people who love beer. Though these groups usually meet up in person and share brewskis, the pandemic has moved most meet-ups online. “There are homebrew clubs in almost every major city, and if they’re not in your city, you can interact with people on Facebook groups,” says Richard.

Homebrew clubs aren’t just a good way to make new friends, it’s also a chance to save money on ingredients and gear. “A lot of these homebrew clubs, they do bulk buys,” Richard explains. “So you can actually just get in on buying your grain and buying your hops in bulk [with the group]. And then if you’re going to brew regularly, it ends up being super cost-effective.”

After weeks of fermentation and carbonation, we were finally able to try our homebrew. Thankfully, the beer turned out well: it had a nice light flavour, great carbonation and didn’t taste off at all—meaning that no bad bacteria got in. Though the final product turned out well, we definitely made some mistakes along the way. First, I was right about the hops: our beer wasn’t as hoppy as I’d like, since we added them a bit later than we were supposed to. And, during our brew day, we realized we didn’t have pots big enough for all the water we needed, so we brewed in two pots simultaneously. Though it worked, it made the whole ordeal that much more chaotic. Since the two pots boiled at different speeds, we needed to dip our one thermometer from one pot to another. Maybe next time, we’ll invest in one big pot—or an extra thermometer.

Next, we’re thinking of trying something more flavourful like a sour or an IPA. But until then, we’ve got tons of beer to drink.

This article was originally published in 2020, and updated in 2021.