Oliver's book, which promises delicious meals in 30 minutes, makes cooking from scratch as straightforward as possible. 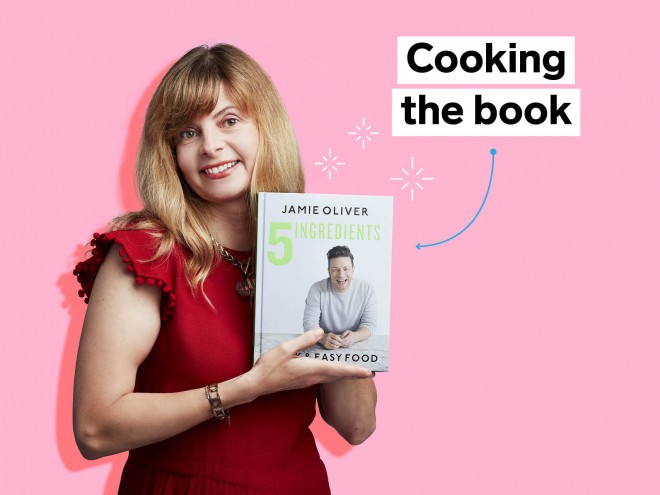 In his latest cookbook, Jamie Oliver pledges that his genius five-ingredient combinations will deliver maximum flavour for minimum fuss in under 30 minutes. You shouldn’t need a ton of kitchen cred to pull off any of the dishes — the recipes are simple enough that Oliver recommends this as a starter cookbook for kids heading off to university. I’m a pretty big fan of the British chef, but I have to wonder if his “glug-of-this” and “pinch-of-that” style will translate into weeknight meals that turn out as promised for an average home cook. And can five-ingredient recipes sustain an entire book’s worth of interesting meals? 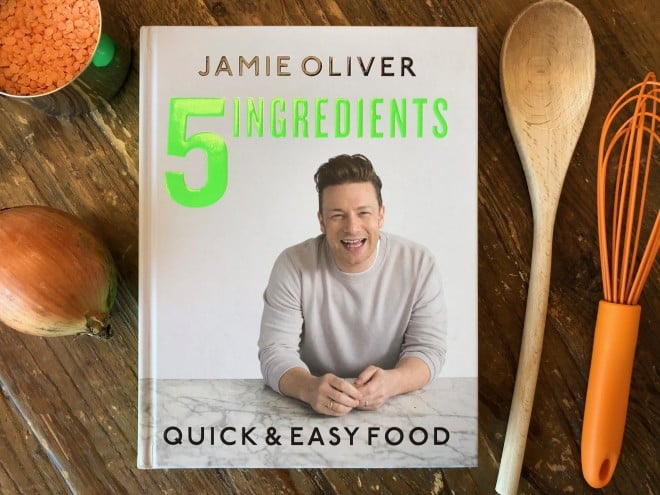 Cracking open the book for the first time, it felt a little lacklustre. There’s a grid design to the pages, with the five ingredients shown on the left-hand side (next to the recipe) and a simple shot of the finished dish on the opposite page. The recipes do not have descriptions. Oliver says the book is presented in a way that helps people get down to business — and I will grudgingly admit that the simple layout, minimal copy and visual cues do give the recipes a very accessible, uncomplicated feel. In a handy section called “The 5-Ingredient Pantry,” Oliver outlines the items he doesn’t include in his ingredient count (olive oil, extra virgin olive oil, red wine vinegar, salt and pepper) and reiterates his philosophy of buying quality basics. OK, I can live with that. I also like that the recipes are organized by their main ingredient, such as pasta, pork, fish and veg (helpful if you spontaneously bought salmon on sale without a plan). 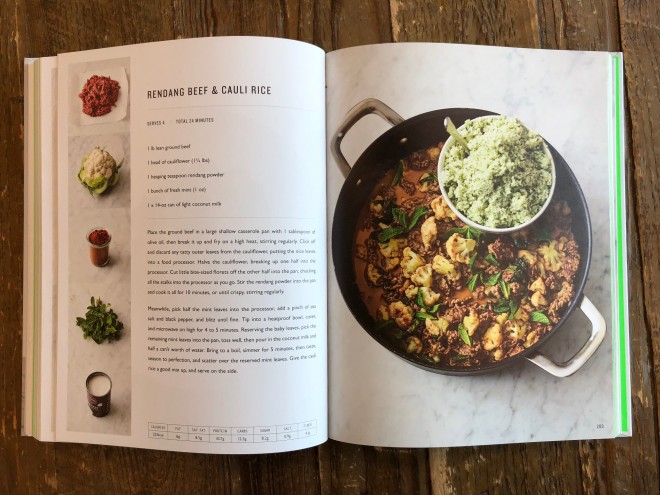 I tried to test these recipes under the circumstances I felt Oliver intended them to be used for: rushed weeknight meals when I hadn’t quite figured out what I was going to make until a few hours (ok, an hour) before I had to start cooking.

I also felt free to mix it up, following the recipes but playing it a little loose with using the exact ingredients. To me, this flexibility is part of Oliver’s style (and his appeal), and is especially appreciated when you’re using things you already have at home or grabbing something from the nearest store.

My first crack at a Quick & Easy meal was the Rendang Beef and Cauli Rice. I read the recipe twice because I couldn’t believe its five ingredients were going to deliver a main and side. Two of those ingredients were mint and a spice mix, meaning the bulk of the meal was coming together from just ground beef, coconut milk and cauliflower. First challenge: I couldn’t find rendang powder at my local grocer. Rendang beef is an Indonesian dish and the rending spice powder includes coriander, turmeric and chilli, so I substituted it for a curry powder I had on hand. What emerged was a flavourful beef dish with a tasty side of cauli rice in, yep, under 30 minutes. It’s a dish I look forward to returning to, rendang powder in hand. 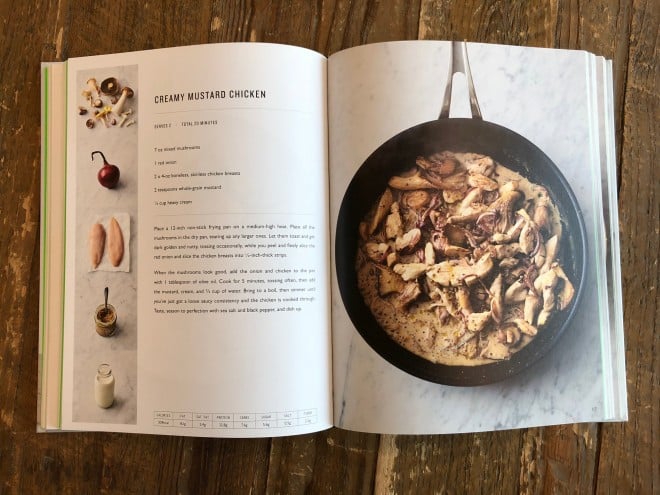 Next, I tackled the Creamy Mustard Chicken, deciding to make it in advance for quick lunch reheats. The recipe relies on heat’s magical effect on food to add texture and flavour — browning mushrooms so that they’re golden and nutty, sautéing the chicken in the pan and then reducing the cream and grainy mustard to a tasty, rich sauce.

By this point, I felt like making dinner was akin to pulling a rabbit out of a hat — but with easy instructions. Not only were the results super tasty, the simplicity of the ingredients kept my kitchen tidy and the prep stress-free. 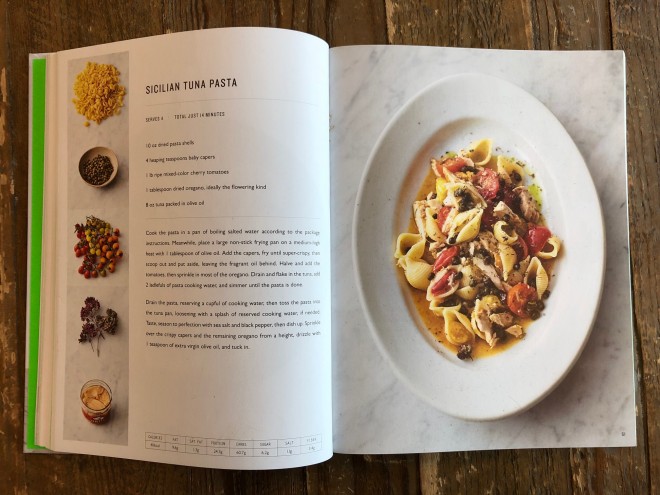 The final frontier was pasta, Jamie Oliver style. Like the other two dishes, the Sicilian Tuna Pasta relied on cooking techniques for extra oomph when ingredients were minimal. Capers were fried crisp and the infused olive oil they left behind was used to cook the tomatoes. Add aromatic oregano, tuna and pasta, then tuck in. 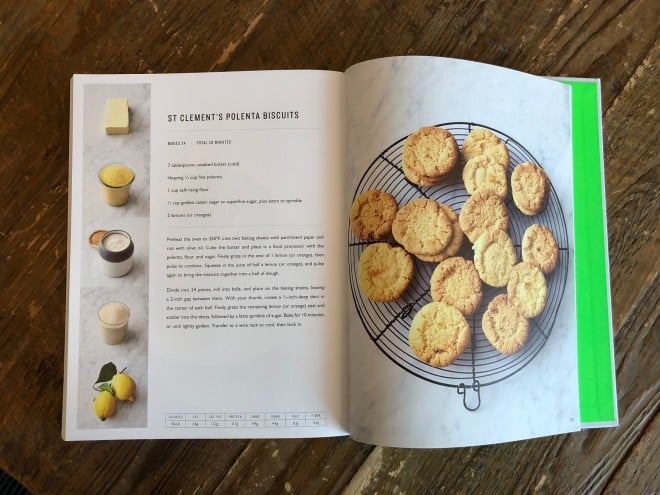 For dessert, I chose the St Clement’s Polenta Biscuits. I was feeling a almost giddy at the simplicity after recently making the multi-step Chocolate O Cookies from Yotam Ottolenghi’s SWEET. Success! The fresh lemon juice and zest really elevated this basic shortbread-style cookie to something a little special. I may not dream about them (like the Chocolate O’s) but they are a great go-to for serving with tea and coffee.

Oliver has tackled quick dinners in other books (such as 15-Minute Meals), but by limiting the ingredients to only five, he really makes you feel as though you’ve got this. In fact, you’ve probably even got time to make dessert.

Sure, no recipe will be perfect the first time, but I was impressed that, even with a stumble or an ingredient substitution, all the dishes I prepared were pretty hard to mess up. As promised, Oliver made cooking from scratch as straightforward as possible.

This book is a hands-on way for beginners to get comfortable at the stove. Because you don’t have to worry about too much food prep, you can focus on the cooking techniques: searing meat before slow-cooking, reducing a sauce or deglazing a pan.

Do keep in mind that some of the ingredients may mean a dash to a specialty food store — you might want to leave those recipes for weekend entertaining (yes, these five-ingredient dishes would also impress guests).

Who To Buy It For:

Friends and family who are honing their kitchen skills

Yourself, if you want to feel like a weeknight superstar

Where It Will Live:

In the kitchen, ready to jump to the rescue as you create your last-minute grocery list.