Why Butter Tarts Are The Ultimate Canadian Dessert

Why we just can’t get enough of these portable golden sweet treats. Plus, what it takes to win a butter tart festival. 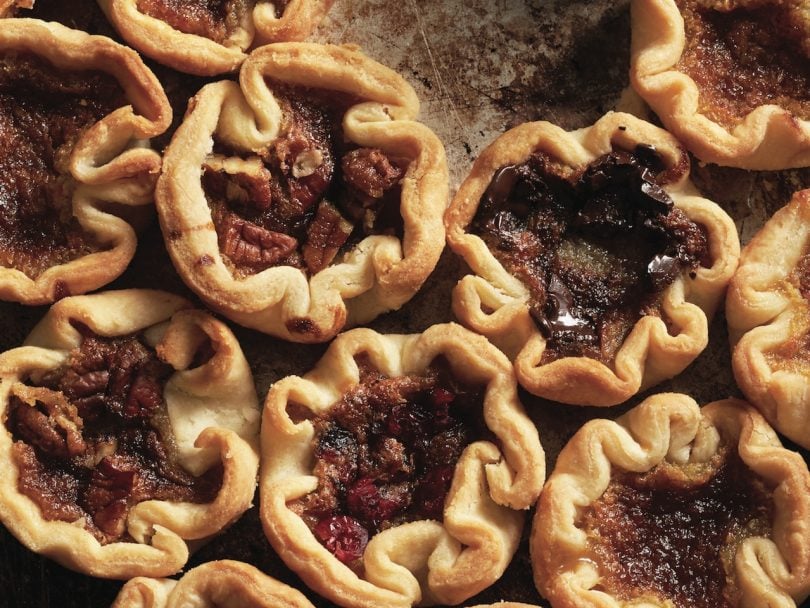 But the real question is, raisins or no raisins? Photo, Erik Putz.

Two shades of beige with a soupy interior that’s often lumpy with lusciously plump raisins, butter tarts are perhaps the ugliest of desserts. But to dismiss them is to lose out on one of the sleeper hits of the baking world. When made right, a butter tart is the perfect treat—an easily portable, hand-held pie with a flaky crust and a sweet, gooey filling. And raisins? I say bring ’em on. (Get our best butter tart recipe here!)

Along with Beaver Tails and Nanaimo bars, butter tarts form the Holy Trinity of distinctly English-Canadian desserts. While the first two are finicky, the butter tart is a cinch for home bakers to master. It’s made up of accessible ingredients—just flour, butter, eggs, corn syrup, brown sugar, vanilla and salt. But for such a simple and homely delicacy, the butter tart generates a lot of emotions—and not just among those who view raisins as an abominable addition.

Where exactly did butter tarts come from?

According to the Ontario Association of Agricultural Societies, a butter tart should have a soft, flaky pastry with no crimps or ridges and a sweet, raisin-flecked filling that’s neither too runny nor too solid. But of course, others swear by gushy filling that oozes down your chin. No one knows who created the first golden one, but mother-of-six Margaret McLeod was the first to write down the recipe (in the Barrie Auxiliary’s 1900 Royal Victoria Cookbook). Chatelaine printed its first butter tart recipe in April 1931, when the magazine was just three years old. (Well, actually, it was called a butterscotch tart, but the ingredients are identical to that of a butter tart.) “A butter tart was pretty easy to make and it was fairly reasonably priced, so whipping up a pan of them wasn’t hard,” says Lenore Newman, a food historian and a geography professor at Simon Fraser University in Vancouver.

By the 1950s, butter tarts were part of the picnic lunch boxes sold at Eaton’s Department Store in Toronto, apparently at Mrs. Eaton’s insistence. (Clearly, she was one of Canada’s early food influencers.) Tarts have continued along this commercial trajectory and now pretty much every self-respecting indie café, bakery, your nearest grocery store—even Tim Hortons has them. 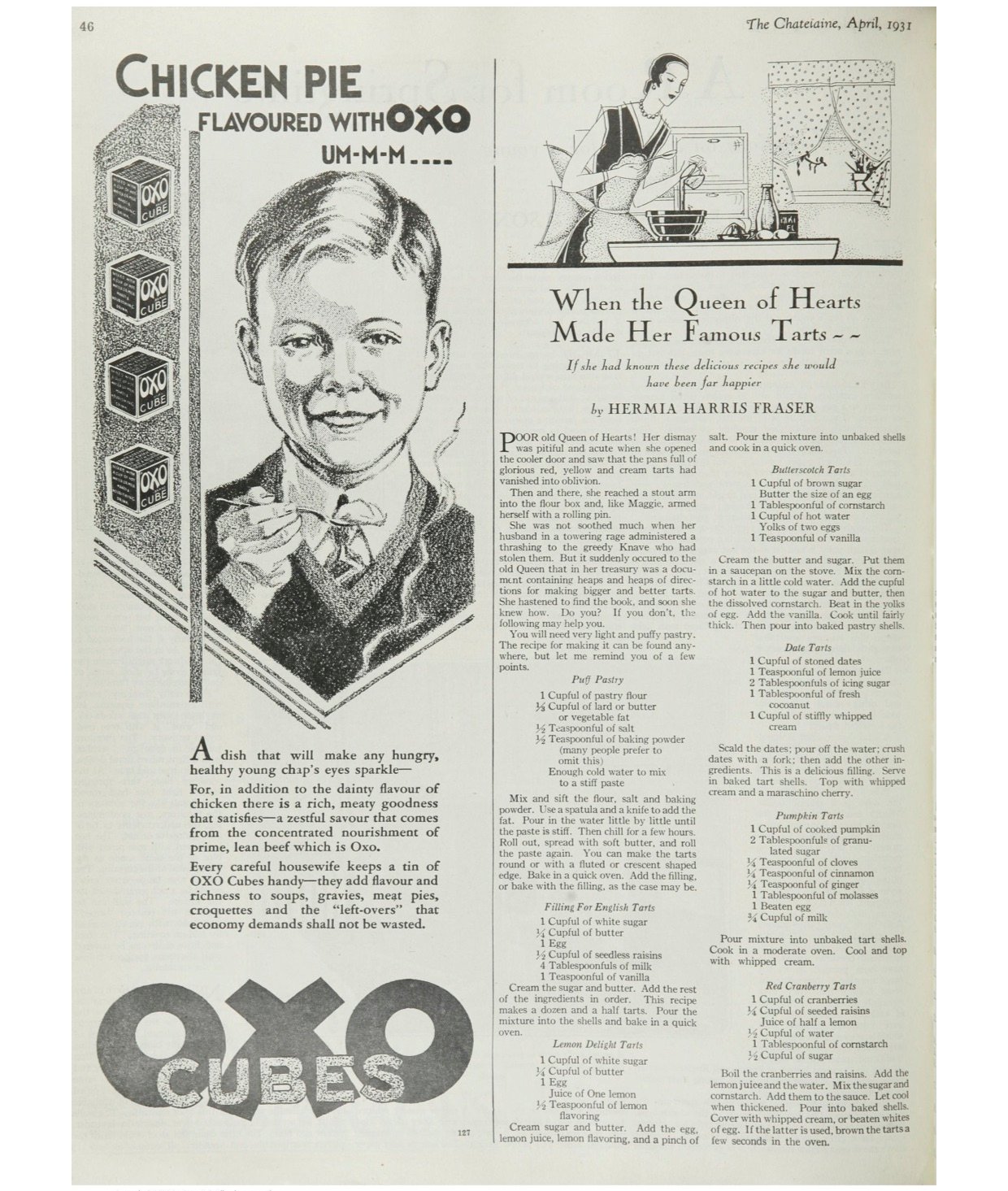 The Queen of Tarts from 1931. Photo, Chatelaine.

There’s no such thing as too many tarts

Ontario has not one, but two butter tart trails competing for our sweet, sweet tourism dollars. The Butter Tarts and Buggies Tour in Wellington North county highlights the area’s Mennonite heritage and the Butter Tart Tour has about 50 participating butter tart bakeries. (In 2013, the tart contingent in Wellington North even considered a lawsuit against the City of Kawartha Lakes to have that region cease and desist their tarty marketing strategy.) But as it turns out the more tarts, the merrier. During high season, the Kawartha Buttertart Factory in Warsaw, Ontario bakes up to 1,200 butter tarts a day, according to Cathy Smith, who owns the two-year-old bakery along the Butter Tart Tour. (The Plain Jane is the most popular, followed by raisin-filled.) And in Mount Forest’s The Spot Restaurant, on the Butter Tarts and Buggies Trail, you can get a slice of butter tart pie as well as the classic hand-held treats.

While home baker Margaret McLeod would be shocked that people would drive hours for a butter tart, food tourism has become an important part of the economy. All across North America, there’s been a huge increase in food-related tourism, explains Newman, as people seek to collect experiences (as well as fodder for their Instagram feed) instead of possessions. According to a 2016 report from the World Food Travel Association, 80 percent of leisure travellers were motivated to visit a particular destination based on a culinary activity or attraction “People want to experience the landscape by engaging with food,” she says.

In 2018, 4,400 people showed up at Port Hope Memorial Park on the last weekend of September for the Butter Tart Tour’s annual Taste-Off. But that’s nothing compared to the crowds at the annual Ontario Butter Tart Festival. On June 9, 2018, Midland, Ontario’s population more than quadrupled when around 70,000 butter tart lovers descended on the town. They gobbled 150,000 tarts in nine hours and generated nearly $4 million for Simcoe County. Both professional and home bakers competed in butter tart contests and festival-goers who were feeling particularly active could also run the Tart Trot—a half-marathon, 10 or 5K with butter tarts available at each water station along the route.

So, what does it take to win a butter tart festival?

Anyone can enter one of the many long-running butter tart competitions that run at fall fairs, but only a few get to vie for the title of best butter tart baker in all of Ontario. For three years now, the Ontario Association of Agricultural Societies (OAAS) has been hosting the butter tart provincials and for such a lofty title, the actual competition—like a simple butter tart—is a surprisingly low-key affair. The judging happens in a small, windowless conference room at the Sheraton Parkway hotel in Thornhill, just north of Toronto. And there’s just one judge who bestows the title, a comically large first-place ribbon and $50 in prize money to the winner. (The bragging rights, however, are priceless.)

She’s not revealing the secret to her prize-winning ways any time soon. Much to her family’s chagrin, she doesn’t have a recipe to pass down. “I eyeball it, I never measure anything. That’s just the way I’ve done it for years,” she says.

Can anyone become a butter tart judge?

Joanne Holt, the judge presiding over the provincials, has never tasted a perfect butter tart—and she’s been grading butter tarts at fall fairs across Ontario for more than two decades. She’s retired and now spends much of her time volunteering—includes training a new crop of homecraft judging. It takes about three years to become a fully qualified judge, a process that involves classes at judging school and shadowing more experienced judges. “I’ve been lucky to shadow very well-trained and well-experienced senior judges throughout my career and I like to think I’m one of those people now,” says Holt, who first fell in love with homecrafts through 4-H. (And she’s no stranger to the other side of the competition. She competes in eight fairs annually and at the last Royal Winter Fair, she was named the premier pickle exhibitor.)

After dinner on Valentine’s Day, Holt arrived at Sheraton Parkway—it was time for her to crown the best butter tart in Ontario. She came armed with her judging kit—paring knives, a plastic roll-up cutting board, a ruler and wax paper. I was expecting some sort of spectacle with multiple judges and a discerning tart-obsessed audience. Instead, it’s the two of us, two OAAS volunteers and 14 plastic zip-top freezer bags filled with tarts on a plain white table. Holt and I chat as we unzip the bags and take out paper plates topped with exactly five tarts each, as per the OAAS’s rules.

Before a single crumb graced her lips, she flipped the tarts over to check the bottoms. Are they evenly browned? How do they feel? “These ones are heavy,” she remarked. “They’re like doorstops.”

Once she completed her meticulous once-over, she worked her way down the line, slicing tiny slivers to taste. She was looking for that delicate balance of slightly salty pastry to sweet, rich filling—that’s not too runny. And she went mining for raisins—raisins were (quite controversially) a requirement. She took notes—grading the tarts out of 10 on pastry, filling and appearance—and left constructive comments for the competitors. But to me and the two OAAS volunteers, she’s a little blunter with her critique. “This is one that’s been done with a liquifying blender,” she said pointing to a tart with a runny and foamy-looking filling (it did not get high marks). One by one, she eliminated tarts from the competition—one had rancid-tasting pastry, two didn’t have raisins and one had folds in the crust. That’s a huge no-no for Holt because you risk getting a mouthful that’s all pastry and no filling—what’s the point of eating a butter tart if you don’t get filling in each and every bite?

Before long, she crowned a winner, bestowing the majestic first-prize ribbon to Moffat’s plate of perfectly round, golden tarts. Unlike the over-the-top tarts that appear at the viral fairs, festivals and trails, Moffat’s tarts—the best homemade ones in the province—might never appear on social media. They’re sweet and simple; more like the humble, homespun butter tarts from days past. “They’re not all pastry,” says Moffat when asked about what makes her tarts so good. “They’re pastry and good filling.”