Halle Berry dishes on beauty, aging and the red carpet

The Academy-award winning actress shares her thoughts on Hollywood, living with diabetes and the legacy of that famous white bikini 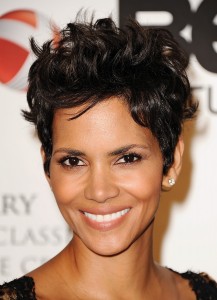 Oscar moments: She was the first African-American to win a best-actress Academy Award for her role in Monster’s Ball. Adrien Brody’s onstage kiss before her acceptance speech sealed the moment in our collective memory.

“I hope I can show my daughter that a healthy lifestyle is the best route to real beauty. I was diagnosed with diabetes at 19, so I’ve had to make my health a priority to manage my disease. It’s all about the choices you make and what you eat. If you don’t take care of yourself, it will show up on your face.”

“There’s a lot of pressure on women in Hollywood to look younger. I see so many people around me trying to battle their age—and I’m one of them. But as I’ve gotten older, I’ve also become a lot more confident with the idea of just being myself, of being comfortable with whom I am. That’s what makes me feel really good today.”

“I have so much fun going to events. I love dressing up; I love checking out what everyone’s wearing. I enjoy seeing people I don’t get to see all the time—yes, even photographers and the journalists—who I’ve known for years.”

“The people I admire most are those who are not only known for their talents, but for becoming more confident the older they get. Women like Tina Turner and Audrey Hepburn. For me, when a woman ages and little lines form on her face, and things are not exactly as they were—but it’s obvious she feels good inside and embraces that—there’s nothing more beautiful.”

“Being a mom, hands down, is my greatest achievement. Childhood goes by so fast, and that time is so precious, but the job that I have can keep me away for 18 hours a day if I’m doing a movie. That’s the hard part. Now I pick and choose my roles differently, because I want to spend as much time as I can with my daughter.”

On being a Bond girl

“When we recreated the white bikini for my role, I figured it would be talked about, but more as a homage to Ursula Andress and her Bond film. I never thought it would become such a huge part of my filmography—but, hey, worse pictures could follow me!”