Christina Hendricks on being Joan and her perfect Saturday

Mad Men bombshell Christina Hendricks dishes on party planning, her famous red locks, and what every woman can learn from Joan Harris. 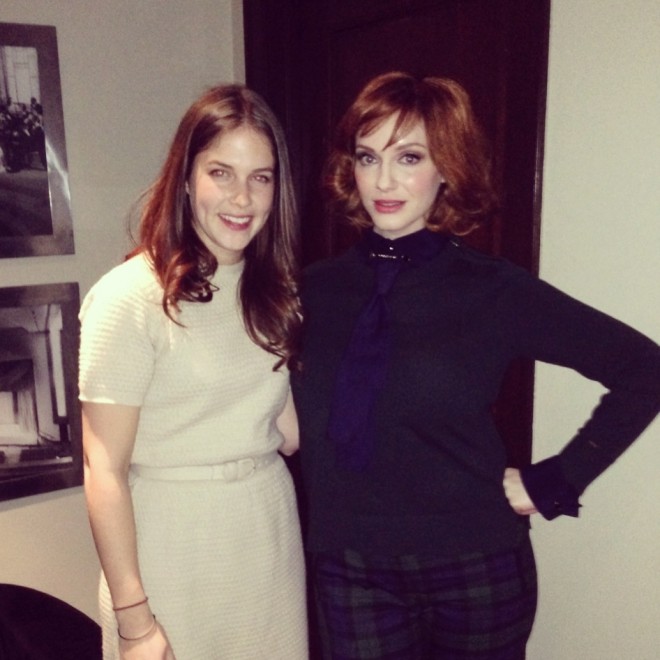 Christina Hendricks chat with our very own Madeline Cravit.

When Christina Hendricks was in Toronto last week to host the P&G Beauty Awards, we were lucky enough to sit down for a chat with the stunning red head. Dressed in slim green plaid pants and a high-collared navy blouse, the soft-spoken beauty was every bit as stylish as she was gracious, charming and down-to-earth. As if we (and every other person on the planet) didn’t already suspect it, it’s now confirmed, she’s a total knockout.

Q: What’s your desert island beauty product?
A: It would have to be moisturizer: you know it’s going to be dry on an island! I really try to listen to my skin and change things up as needed. I tend to be dehydrated so right now I’m using Olay Regenerist but I’m also drinking a gallon of water a day.

Q: Are you BFFs with your hair colourist?
A: I have a wonderful colourist, Vanessa at Andy Lecompte in Los Angeles, and she does my hair when I’m not at work. But honestly I’ve been using the same colour for so long that it’s pretty simple now. I had some missteps along the way, but it was before I got to this colour. I actually don’t know if they were missteps more than adventures. I’ve definitely tried every colour known to man.

Q: Are you ever tempted to try something different?
A: I get tempted to change it up, but I’ve got to have a different hair colour in a film I shot this summer. I was blonde in one film and brunette in another and red in another one. Luckily as an actress you get to change it up enough in your work world.

Q: How has working on Mad Men influenced your approach to beauty and style?
A: The funny thing is I’ve always sort of done my makeup the same way. I’ve always done a liquid liner on top and a cheek and a pinkish lip. So that wasn’t something that I had to get used to. The hair on the other hand, that was certainly something that I had to get used to, and I will not be taking that away from the show! I did learn a lot about tailoring and fashion and the things that really work for me. I hadn’t experimented with a lot of those shapes, like pencil skirts and blouses and those kinds of things before I started the show. Now those pieces have become staples in my look.

Q: In which ways do you admire and relate to your character, Joan Harris, on Mad Men?
A: I think that Joan has changed quite a bit from season one to where she is now and I think we’ve seen a more vulnerable and softer side of her as we’ve gotten further along. I feel like that’s more of something that I see in myself and see in her, as opposed to the uber, uber confident, always has an answer, always knows exactly what to do Joan. But I do admire that in Joan and her confidence and her resilience is something that I’ve hopefully taken a little bit of in playing her.

Q: What would your ideal Saturday be?
A: I like to host a lot. My husband and I like to cook so often times we’ll have our friends over and we’ll barbeque if it’s the summer. Get everyone around and play some games.

Q: What’s your go-to party dish?
A: I wish that I had a specialty, but I think that my specialty is that I’m adventurous because I’m always trying something new. That’s one of the things we love to do. We’re constantly on Epicurious or we’ll look at Food & Wine Magazine. I did eat something the other night at a restaurant called Edulis [in Toronto] and I thought I’m going to try and steal this idea when I’m hosting next. It was a beautiful green Spanish olive, stuffed with a pepper and anchovie puree with a tiny little bit of homemade bread on a skewer.