In order to celebrate the results of my gestational diabetes test (negative!) I thought it would be fitting to attempt the Ultimate chocolate-chip cookies recipe. My mother pointed out that I have made very few dessert recipes and she was right: I shy away from baking as I fear disappointing my family with either raw or overcooked baked goods. I thought that the cookie recipe would be a good one to boost my ego. 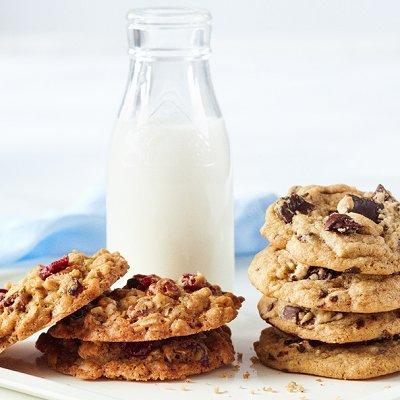 In order to celebrate the results of my gestational diabetes test (negative!) I thought it would be fitting to attempt the Ultimate chocolate-chip cookies recipe. My mother pointed out that I have made very few dessert recipes and she was right: I shy away from baking as I fear disappointing my family with either raw or overcooked baked goods. I thought that the cookie recipe would be a good one to boost my ego.

I’ve made some chocolate chip cookies on a few of the flights I’ve worked on when I was a flight attendant, and was actually quite good at it. Mind you, the cookies were pre-made, so my baking tasks consisted of pre-heating the oven, spacing the pre-measured dough evenly apart on the trays, cooking them at their prescribed temperature and time, and then cooling them before serving. But if I could do that successfully, surely adding a few more steps to the process shouldn’t be too hard, right?

So I pulled out my apron (aren’t you surprised that I even have one?) for the first time this year and set to work. I thought that if I dressed the part, I’d be more likely to succeed. I remembered baking with my grandmother as a child. Her cookies were always perfect. She was artfully capable of scooping out the perfect amount of ingredients at incredible speed, without ever picking up a measuring cup. She was a proud homemaker who lived on a farm and always had two fully stocked freezer chests filled with her homemade buns, dainties and cookies. I don’t expect to ever reach her level of kitchen expertise, but it would be nice to surprise my family with a home-baked treat now and again. My mother worked full-time as we were growing up and still managed to make homemade cinnamon buns, scones, cookies and dainties, so I have no excuse for not being able to do the same.

I decided to use coarsely chopped dark chocolate chunks and estimated that three bars at 100 grams each would likely equal two cups of chocolate chips. I happily unwrapped the dark chocolate bars and hacked away at them until my cutting board was covered in asymmetrical black shards of decadent chocolate goodness. A few of these shards fell into my mouth. Oops.

My goal was to make the chocolate chip cookies and have them ready when my husband returned home from playing hockey. I thought it would make for a nice Canadian winter scene: My husband coming home to a warm house and a plate full of freshly baked cookies. I had 90 minutes to pull this off. The recipe stated 20 minutes of prep time and eight minutes of baking for each batch of cookies. At a dozen cookies a batch for a recipe of five dozen, I calculated needing one hour and then some cleanup time.

I must admit, the entire process went like clockwork. I had two baking sheets and each held a dozen cookies. When one sheet was pulled out of the oven after eight minutes, the cookies perfectly golden around the edges, the other sheet went in. Two minutes later, the hot cookies were moved to a rack, the next batch of 12 was placed on the sheet, and the oven timer would alert me that eight minutes had passed and the process was ready to be repeated. A few times I even had a spare minute or two to wash a few dishes and, in fact, when the last batch was cooling, I had finished washing the mixing bowls and measuring devices. I couldn’t believe it was that simple to ‘whip up’ a batch of cookies. I had always envisioned it as a full evening type of activity.

The cookies were amazing and aptly named. I ate too many and should probably ask my midwife to schedule a re-test of my sugar levels. My husband was very happy to stuff himself with warm cookies after his hockey game. I must warn you that the recipe says that it makes five dozen (i.e. 60) cookies, but I counted only 59. Oh wait, that was likely due to the fact that I ate a couple chunks of chocolate before mixing them into the dough… 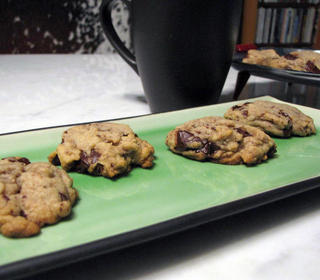