I had a pretty strong inkling that we’d like this soup, but I underestimated by just how much. It was my first time roasting red peppers and I was surprised at how easy it was. And while the peppers were roasting I prepped the rest of the chowder ingredients. Smart, huh? 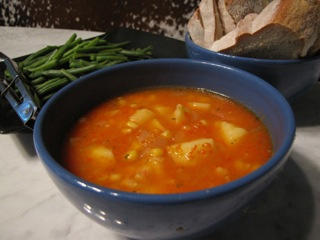 I had a pretty strong inkling that we’d like this soup, but I underestimated by just how much. It was my first time roasting red peppers and I was surprised at how easy it was. And while the peppers were roasting I prepped the rest of the chowder ingredients. Smart, huh? It was such a treat not to have to watch them in the oven like a hawk or to have to flip them over. Although I must admit that the crackling and sizzling sounds coming from the oven had me peer through the oven window on more than one occasion and contemplate pulling out my trusted fire extinguisher, just in case.

I was also surprised when it was the oven timer that beeped, rather than the smoke alarm going off, to let me know it was time to remove the peppers from the oven. The juicy-looking peppers were covered in foil and my dear friend Jeremy advised me that the purpose of this step was so that they would be steamed. Jeremy is a fabulous cook and baker who thoughtfully offered to bake a three-tier cake for a friend’s wedding while I, in the meantime, was celebrating the successful completion of a cheddar zucchini loaf. He’s also the type of person who can recite a recipe easily, measurements and all. I, on the other hand, need to go check out my blog posts to even remember what we had for dinner the previous night.

How could I be out of corn when I was making corn chowder? I suppose the answer would be the same as when I neglected to pick up romaine lettuce for a Caesar salad dish a few weeks back. May I blame this flakiness on having baby brain from being six months pregnant? Please?

Here’s where, again, a family member bailed me out. Our student/housemate/sister-in-law offered to run to the convenience store at the corner and pick up some corn. I sent her on her way, not expecting results (it’s not a CORNvenience store) but she phoned me just minutes later to see if I needed creamed or kerneled corn. “Kernels, please!” I nearly shouted. Dinner was saved! The only pureed ingredient in this chowder was the peppers so the rest got to stay in its glorious kerneled (corn) or cubed (potato) form.

This soup is both hearty and sweet and would make a great starter, a tasty lunch or a nice side for a meal. Just, err, try not to forget to buy the corn first.