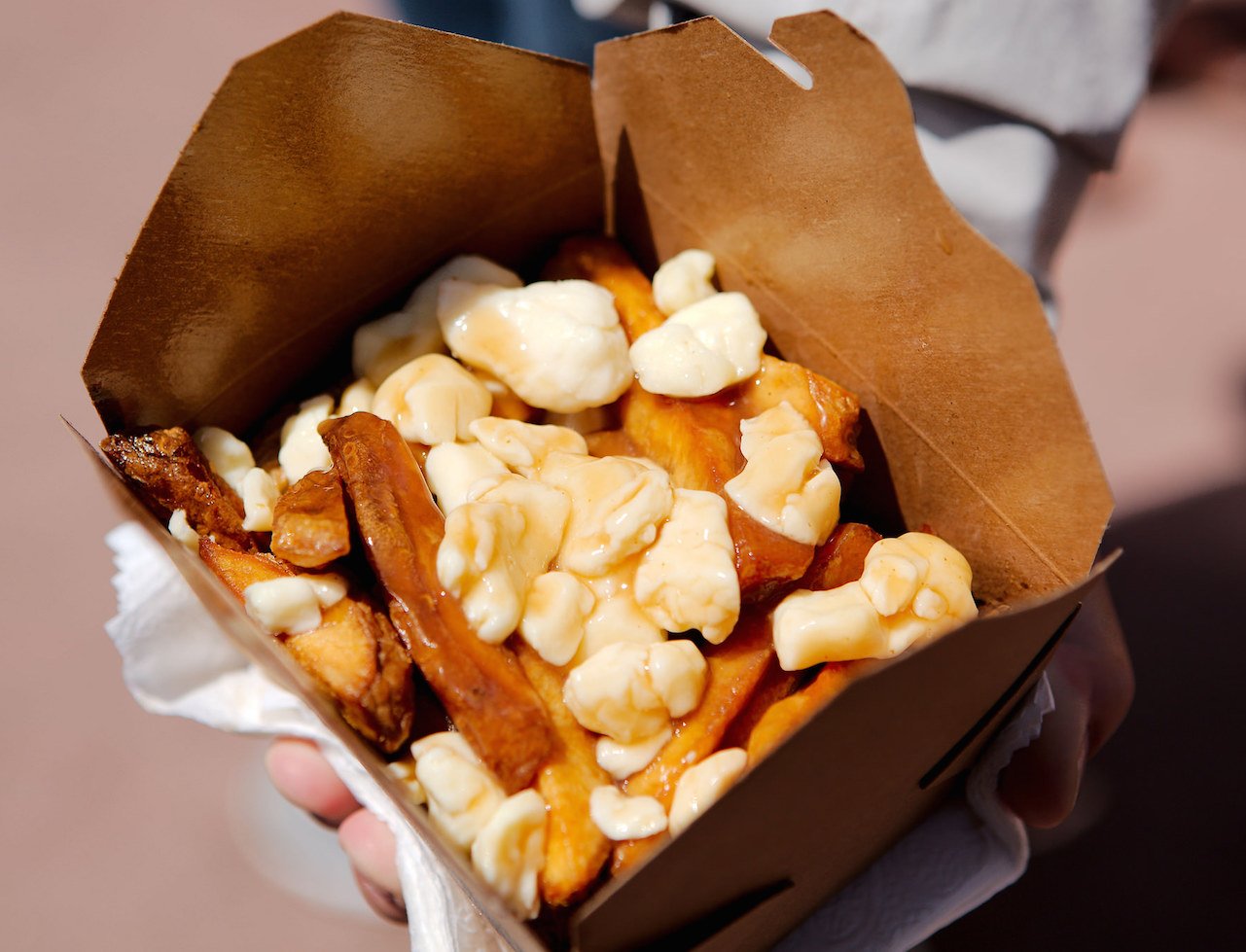 We asked 1,500 Canadians “what’s your favourite iconic Canadian food?” The clear winner? Poutine, the choice of 21 percent of respondents.

Poutine’s victory over maple syrup (14 percent), and lobster (10 percent) shows how the messy trio of fries, cheese curds and gravy has gone from a quirky, one-off combo to a cross-Canada culinary mainstay.

Poutine purists, though, will tell you that you still need to journey to Quebec to get an authentic experience, where it was invented in the 1950s and where there are still several stories of how poutine first came to be. Most sources point toward the small town of Warwick, located in Arthabaska county, Quebec, where local dairy farmers produce those famous squeaky curds. The now-iconic food wasn’t created in a single “aha” moment, either, but in several stages. First came the curds, when Warwick, Que. restaurant owner Fernand Lachance added cheese curds to French fries at the request of a regular customer at his restaurant Le Lutin qui ruit in 1957. The combination became popular, but customers were finding the dish became cold quickly, so Fernand added gravy to keep the fries and cheese warm, says Canadian historian Davida Aronovitch.

Below, a brief look at the history of poutine, and key stops along it’s evolution into a Canadian food icon.

Fast food frenzy
Available in rural Quebec since the 50s, poutine became a common street food option in Ontario and Quebec by the 1980s, but didn’t reach mass popularization until the early 90s, when popular fast-food chains like McDonald’s, Burger King and Harvey’s began adding it to their menus.

Haute poutine
Poutine made the leap from a fast-food offering onto the menus of high-end restaurants, when spots like Montreal’s Au Pied de Cochon started serving up poutine topped with foie gras in 2002. Other luxe varieties that have sprung up include chef Chuck Hughes’ competition-winning lobster poutine on Iron Chef, now served at his restaurant Garde Manger, and fries layered with triple-A steak, truffles, and red wine demi-glaze at Pub Quartier Latin.

The rise of poutine-only restaurants
Chefs have been dreaming up creative poutine combinations since shortly after it’s inception. Historic la Banquise in Montreal began offering a Italian variation (where bolognese sauce replaces gravy) in the 80s, and their menu eventually grew to offer 30 different types of poutine. This inspired Ottawa, ON. native Ryan Smolkin, and in 2008 he launched Smoke’s Poutinerie in Toronto, the first poutine-only restaurant in town. The trend caught on, and other poutine-exclusive spots like Poutini’s House of Poutine and La Poutinerie began popping up across the country.

Poutine and politics
Even Canadian politicians aren’t immune to poutine’s powers. Former Quebec premier Jean Charest was quoted as saying, “ I love poutine so much that I eat it as little as possible,” and current prime minister Justin Trudeau couldn’t resist stealing a bite of a spectator’s poutine while attending the Tragically Hip concert last year.

Poutine for all
Poutine does not discriminate — even vegan and vegetarian restaurants, like Toronto’s Fresh, hopped on the craze. They offer up a version with veggie-based mushroom gravy and a vegan “cheese” sauce.

Peak poutine
There is now a poutine to appeal to every palette. From the comforting (turkey dinner), to fresh twists (butter chicken), to the just plain silly (poutine pizza) there are no shortage of options. There are even entire festivals dedicated to the dish. Montreal hosts the week-long La Poutine Week where local restaurants each create a unique poutine, and Poutine Fests are held in Ottawa and Toronto yearly. If you are unable to attend a festival, but are looking for an excuse to indulge in an annual poutine binge, National poutine day is April 11th.