You know when you've got a pesky winter cold and you just want to eat something that’s quick to make, tasty and chock full of greens? Being sick during the winter while pregnant and thus unable to take any medications to make me feel better has diminished my enthusiasm for meal prep (to put it mildly). 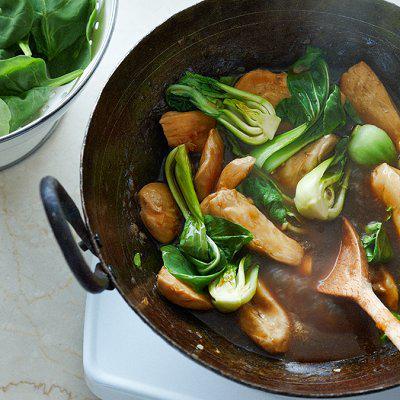 You know when you’ve got a pesky winter cold and you just want to eat something that’s quick to make, tasty and chock full of greens? Being sick during the winter while pregnant and thus unable to take any medications to make me feel better has diminished my enthusiasm for meal prep (to put it mildly). This dish looked like it had just what I needed: simple ingredients, chicken broth (to cure my cold) and lots of greens (bok choy and baby spinach).

My parents were visiting us so I doubled the recipe just to be sure there would be enough to go around. And, who am I kidding, I was hoping that perhaps there would even be leftovers for me to take to work the next day.

My parents (the sweethearts) ran to the grocery store to grab what I needed. Both the teriyaki sauce and the chicken broth they purchased were ‘low-sodium’ versions but you’d never know it by the taste.

Doubling the recipe meant that I likely should have had a doubly large wok, but I crammed everything in to my average-sized wok and waited for the bite-sized chicken pieces to turn from pink to white. It took a lot longer than double the recipe timing of three minutes and I was reminded of a lesson in my grad 12 physics class (before I dropped out of it) about mass not equaling something- hmm, I forget what exactly though. I also remember telling my guidance counselor, who attempted to sway me from dropping physics, that I would never need it. I can happily say that in my 13 plus years as a flight attendant I have never regretted dropping physics, but tonight, while making this dish, I can also say that doubling the ingredients changed the cooking time considerably and I do not know how to write that into a computable formula. Likely because I dropped out of physics.

My toddler consumed the first serving before we had a chance to take the photo. In fact, when positioning the bowls before taking the photo, my husband grabbed one of them and started eating! A quick slap on the wrist and a snapshot later, we were all digging in. Everyone loved it and the only comment otherwise was from my husband who said that I could add more ginger next time. But he’s such a ginger aficionado that he likely would have said the same thing about a peanut butter sandwich. All in all, another hit and enough left for me to take to the office for lunch tomorrow- although I may have to hide it from my husband.

Get the recipe for Ginger Chicken Stir-Fry with Greens 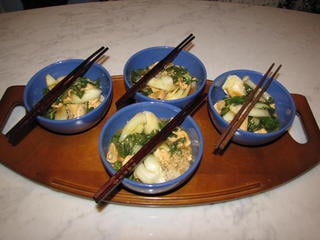 For more information on Chatelaine Modern Classics, including how to purchase, go here.