The difference between butterscotch and caramel

This week a discussion arose regarding the difference between the two confections. Since a kitchen full of seasoned cooks could not seem to pin down the answer, I decided that this required further investigation...and a few recipes to try out. 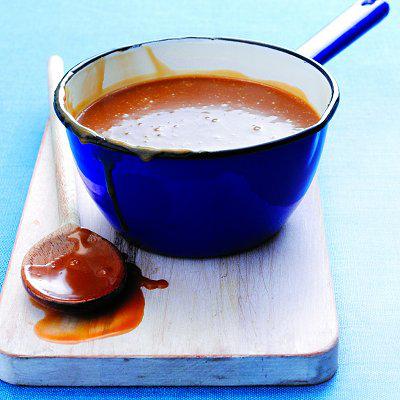 This week a discussion arose regarding the difference between caramel and butterscotch. Since a kitchen full of seasoned cooks could not seem to pin down the answer, I decided that this required further investigation.

Caramel
The primary ingredient in caramel is white granular sugar. Caramel is as much a product, as it is a process. It is created by slowly heating sugar to between 320F-350F, at which point the sugar will take on a range of colour, starting from light golden all the way to deep amber. At this point, you have caramel. Caramel candy is produced when the sugar is heated to a ‘firm ball’ stage, liquid is then added and the mixture is gently brought back to room temperature. Often flavourings such as vanilla, salt or a citrus such as lemon or lime are added. For caramel sauce, water or cream is added to thin the caramel.

Butterscotch
Sugar is also the primary ingredient of butterscotch, however the term butterscotch commonly refers to the flavour combination of brown sugar and butter. In this case, the sugar and butter are slowly melted together and gently brought to a boil. The mixture is then cooked to a “soft crack” stage on your candy thermometer. Because of the combination of ingredients, the mixture is not as temperature sensitive as a caramel. You can achieve the butterscotch flavour very easily simply by bringing the two ingredients to a boil and cooking until slightly thickened (without a candy thermometer). In this case, the addition of corn syrup is commonly used to achieve the chewiness of the butterscotch. Cream can be added to make a butterscotch sauce. Oh, and if you continue cooking your butterscotch to the “hard crack” point on your thermometer, it is then referred to as…toffee! One of the trendiest of caramels these days is Dulce de Leche. What distinguishes dulce de leche from butterscotch and caramel is the ‘leche’, meaning milk. Traditionally, milk and sugar are slowly simmered together until much of the milk has evaporated and the sauce had taken on a thick consistency with a caramel-like colour. Prepared dulce de leche is also available in the grocery store.

Try it: Check out our banoffee tarts from our new November issue.

So, regardless of the difference between these confections one thing is clear, they are both fabulous and perfect for your fall desserts.

FILED UNDER: dulce de leche In the Kitchen tart