Quinoa 101: Why we love this superfood and quinoa recipes

The essentials for this high-protein, gluten-free seed, plus our five best recipes 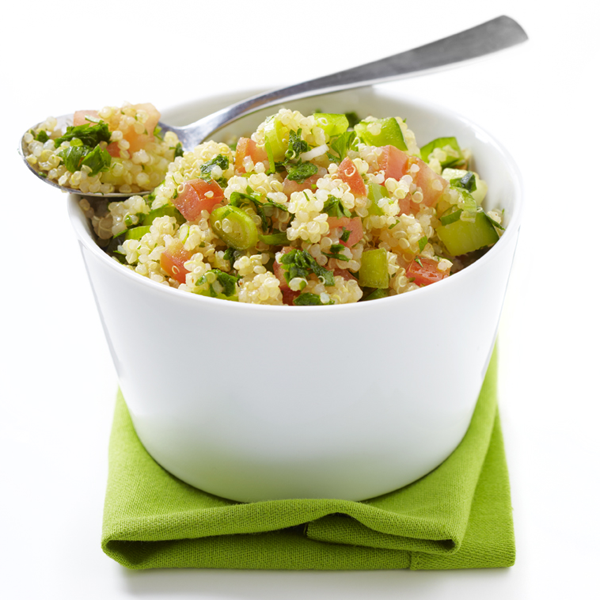 The first thing to know about this superfood taking the world by storm is how to pronounce it: “keen-wah.” The second thing to know is that it’s not actually a grain, but the seed of a grain-like crop from the chenopdodium family. Considered a ‘pseudo-cereal’ because it can be consumed the same way as a grain or grass – it actually belongs to the same family of species as swiss chard, beets and spinach. Its origins are in the Andean region. Here a few more essential quinoa facts that explain why it’s so good and so good for you:

The seed is off-white in colour and resembles a very small bead. When cooked, it unravels, becomes translucent and looks like a small coil. The texture of cooked quinoa is firm, and the flavour slightly nutty with a hint of bitterness.

Quinoa is very high in protein (14% by mass) and is also considered a complete protein, meaning it contains all 9 amino acids required for a human diet. It is high in calcium – making it a great selection for vegans or those who are lactose intolerant. It also has good amounts of phosphorous, iron and fibre.

At one time only available in specialty or health food stores, quinoa is now widely available at grocery stores. The standard quinoa is off-white, however black and red quinoa are also available. Try red quinoa in our cinnamon quinoa with dates.

It is an extremely versatile ingredient and can be substituted in for a recipe that calls for a whole grain. The flavour is mellow enough that it can accompany many flavour profiles.

Quinoa is cooked similarly to rice. When cooked, quinoa will quadruple in volume (1 cup dry will yield 4 cups cooked). For the most part, quinoa should be rinsed before cooking – however some brands indicate the seeds have been pre-rinsed. Directions: Add 1 cup of quinoa to 2 cups boiling water. Cook for approximately 12 minutes until all the water has absorbed. Remove from heat and fluff with a fork.

Cooked quinoa can be enjoyed hot or cold. Try it cold in this balsamic grilled chicken salad or our quinoa tabbouleh salad (pictured). Or keep it hot in this quinoa with wilted spinach.

Store dry quinoa in an airtight container in the fridge for three to six months. Cooked quinoa can be stored refrigerated about three days.

Enjoy quinoa in other forms. Puffed quinoa is a cereal product that can be substituted in for any other puffed grain. The Chatelaine Kitchen used it in our gluten-free strawberry and granola parfaits.

Quinoa flour is also available and is used commonly in gluten-free baked goods.

FILED UNDER: gluten free In the Kitchen quinoa