10 Herbs And Spices For A Well-Stocked Spice Drawer

Start your spice drawer with these basics, then add to it as you discover your personal favourites. 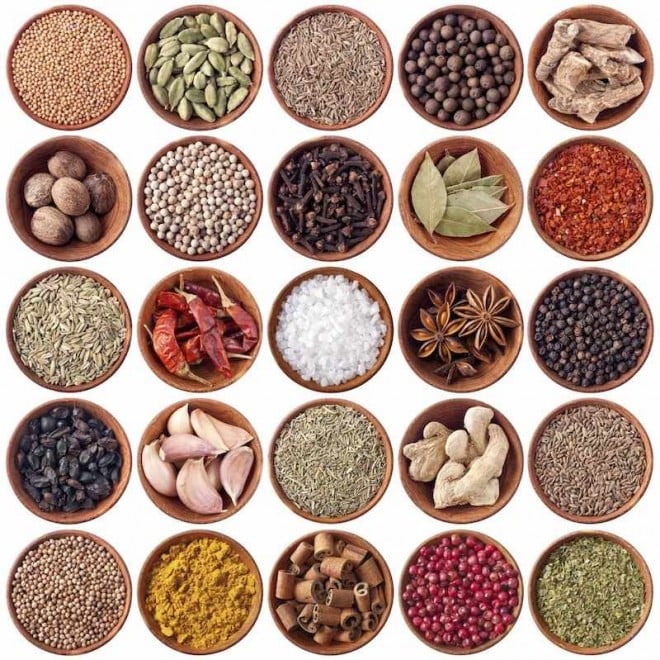 For thousands of years, spices and herbs have been used in cooking as a simple and economic way to add flavour to any dish.

While the ‘perfect’ spice cabinet will be unique to individual tastes, here are 10 basic herbs and spices to give you a good foundation to build on.

Tip: Although whole spices and herbs can have a shelf life of up to 3 years, they gradually lose flavour over time. To keep them tasting their best, purchase in small quantities and store in glass jars with metal lids in a cool, dark place.

1. Black peppercorns
This slightly pungent and aromatic spice should be ground fresh for optimal flavour. Whenever possible, opt to buy whole peppercorns and use a pepper mill instead of the pre-ground spice to give you the most flavour and heat.

2. Ground cinnamon
A warming spice packed with antioxidants, cinnamon adds a touch of sweetness to dishes. Typically used in baking and sweet preparations, it can also be found in savoury Indian and Moroccan-style dishes. But did you know most of the cinnamon we purchase isn’t really cinnamon after all? Cultivated throughout Asia, cassia bark is sold as cinnamon around the world as it is more affordable than the real deal.

Related: 4 Common Types Of Salt Used In The Kitchen

3. Chili powder
Known for a bright red or orange colour, chili powder is a combination of a variety of chilis. Often used in taco seasoning and curries, this spice can be found with different levels of heat (mild, medium and hot). It’s a blend of spices that typically contains cumin, paprika and salt.

4. Red chili flakes
Chili flakes are a great way to add heat to any dish. Made from crushed, dried red chili peppers, you’ll often find this spice used in pasta and pizza, but it’s also added to pickles and oils for flavour.

5. Cumin
Warm and earthy, cumin is a great addition to North African, Middle Eastern or Indian dishes. It’s best to add cumin early in the cooking process to  increase the depth of flavour.

6. Ground ginger
It’s most often used in baking, but ginger can also be found in spice blends such as jerk spice, curry powder or tandoori seasoning. Its sweet, peppery-lemon notes complement both savoury and sweet dishes.

7. Nutmeg
A little goes along way with this powerful and pungent spice. Grown in the same seed as the less-commonly-used spice mace, nutmeg is sweet and warm and goes well in hot drinks, baked goods or with root vegetables. For the best flavour, grate nutmeg fresh with a microplane grater.

Try it in:
Classic Lasagna
Fruit and Nut Oatmeal

8. Smoked Paprika
Smoked paprika is slightly sweet with notes of smoke that can be either mild or hot. It adds a beautiful red colour as well as some sweetness and smoky flavour to meats, fish and vegetables. Used worldwide in a range of different cuisines, it should be essential to your spice drawer to add extra depth to dishes.

Try it in:
Spicy and Sweet Nuts
Pork Tenderloin with Rapini and Creamy Polenta

9. Dried oregano
A versatile herb used in Mediterranean and South American cooking, dried oregano has a bold floral and lemony flavour. Dried oregano wants to be the star of any dish so be careful as it can overpower other flavours.

10. Bay leaves
Bay leaves are the background star of soups and stews; while the flavour isn’t as in-your-face as oregano or cumin, just one or two leaves will add flavour. Add them at the start of the cooking process and remove before serving.

FILED UNDER: spice The Kitchen Apprentice