5 spring veggies to try while they're still in season

From fiddleheads to ramps, their days are numbered so enjoy them while you can. 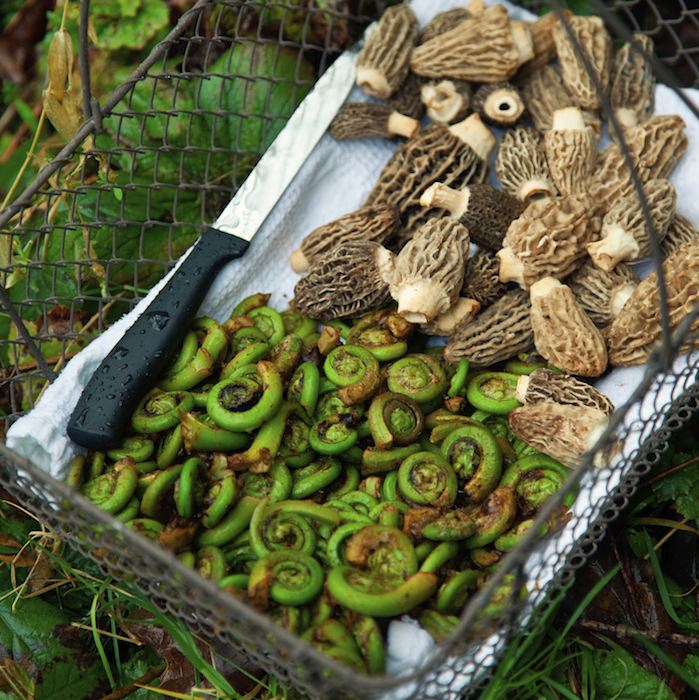 One of the highlights of spring is venturing out to the farmers’ market to sample the freshest, in-season produce. And while we all leave with a clutch-full of traditional favourites such as rhubarb, asparagus and peas, here are a few other must-try, short-lived, spring picks. Some may seem familiar, some unusual, but regardless, their days are numbered so enjoy them while you can:

Ramps
Sometimes referred to as wild leeks, ramps are very aromatic onions with a leafy green top. They resemble the bulb of a green onion, with a flatter, broader green leaf. Their flavour is a combination of onion and garlic – and freshly-picked, they give off an intense taste and aroma – so use sparingly, adding more to taste. This spring, substitute ramps for green onions for a delicious twist. Try this method with our summer corn pasta salad.

Fiddleheads*
Fiddleheads are foraged in the wild, and are the unfurled tops of wild ferns. Their peculiar appearance and tendency to grittiness tends to throw some off, but cleaned and cooked properly, their flavour has a delightful resemblance to asparagus and artichokes. When choosing fiddleheads, look for a nice bright green colour and a firm, tight composition. Fiddleheads will brown quickly so should be cooked and consumed within one to two days. To clean, fill the bottom of your sink with water and swirl the fiddleheads well. A good wash will remove the grit that sometimes gets caught in the tight parts of the fern. Try substituting them in for asparagus in our asparagus stir-fry.

*It’s important to cook your fiddleheads properly – and they should never be eaten raw. Read more here.

Artichokes
While the name may seem common, the majority of us are only exposed to canned artichokes. A fresh artichoke is a whole new game! They are available throughout the summer, but spring artichokes are largest, most delicate and most delicious. When purchasing, look for a dark green colour, tight leaves and a freshly cut stem. There are many ways to enjoy fresh artichokes, and they’re easy to prepare. Try our recipe for lemon goat-cheese-stuffed artichokes.

Morels
Also foraged in the wild, morels can’t be cultivated, so they are a true fungi gem. They are cone shaped, with a honeycomb appearance. Their flavour is extremely unique, with a smoky, nutty quality. Their sponge-like texture combined with their honeycomb appearance makes them a bit gritty, so give them a more thorough wash than you would a regular mushroom. For best results, brush off visible dirt. Then, like the fiddleheads above, swish them in a sink of cold water. You will see all the dirt settle in the bottom of the sink. Remove to a colander to dry. Reserve this cleaning until you are ready to cook – otherwise store them at room temperature in a paper bag. Substitute shiitakes with morels in this chicken shiitake and asparagus skewers with sweet chili sauce.

Herbs
Although our supermarkets make herbs available throughout the year, a farmers’ market is your chance to pick up herbs that you have only enjoyed in their dried version over the year, as well as some varieties that the supermarkets don’t carry. Some early spring herbs include:

FILED UNDER: artichoke farmers' market In the Kitchen oregano