Have you ever had char siu sauce? It’s a Chinese barbecue sauce that I needed to find so that I could make the Char siu with grilled pork recipe from the Chatelaine cookbook. I was eager to try it because a) the picture looked so tantalizing and b) I had no idea what char siu sauce was. 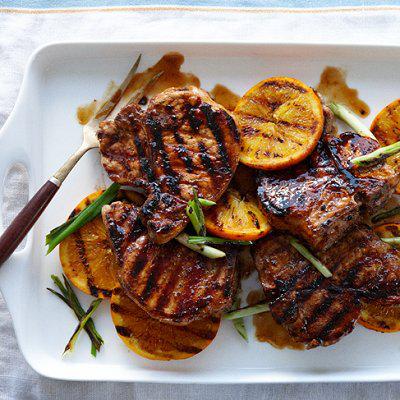 Have you ever had char siu sauce? It’s a Chinese barbecue sauce that I needed to find so that I could make the Char siu with grilled pork recipe from the Chatelaine cookbook. I was eager to try it because a) the picture looked so tantalizing and b) I had no idea what char siu sauce was.

I was surprised that I had such a hard time finding it in my neighbourhood grocery stores. I always thought that our nearest and dearest supermarket had an excellent selection of international foods (one entire aisle!), but char siu sauce was nowhere to be found. I asked three different pinny-clad young men if it was something they carried in the store and only one of the three had ever heard of it. He claimed that they were sold out but should get some in by the end of the week. I checked back every few days and still no char siu sauce. My husband took to looking for it at the grocery stores near his work but to no avail. A few weeks later he finally found it somewhere, brought it home, was thanked profusely (by me) and then watched as I put it away in the cupboard, only to forget about it because I had become obsessed with trying a different recipe by then.

Two months later, my husband reminded me that I had wanted to make the Char siu with grilled pork recipe. The jar of sauce likely caught his eye when he was looking for something else in the cupboard. When I got home from work I had every intention of barbecuing the pork for this recipe. Correction: I had every intention of sending my husband outside to barbecue the pork for this recipe. My protruding belly filled with a nearly formed fetus would, in my opinion, inhibit me from tending to the barbecue in the proper fashion – and from reaching the grill. Plus I had side dishes to prepare which required me to keep an eye on the stove top.

This recipe is very simple: Prep time 5 minutes, grilling time 12 minutes (or less if you use a countertop grill in place of a barbecue). Mix the char siu sauce with some minced chipotle chili packed in adobo sauce or, as I did, with a dash or two of Tabasco sauce, brush the pork with the sauce and continue brushing and grilling the pork until it’s done. I just needed my master barbecuer to return home and fire up the grill.

My husband had run up the street to grab a couple of produce items we were lacking. But he was taking way longer than I expected and the rest of us were getting hungry. I pulled out our indoor countertop grill and plugged it in.

While the pork was grilling, my husband came through the door with a mattress perched on his head. Apparently his run to the fruit and vegetable stand included a pit stop at the furniture shop to buy a bunk bed mattress for our son. My husband is very efficient at multitasking – and also very good at balancing a mattress on his head for two blocks. 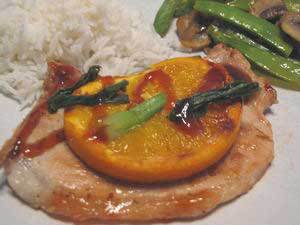