While Trump beat his chest like a sore loser, NFL players who protested over the weekend were composed and respectful. 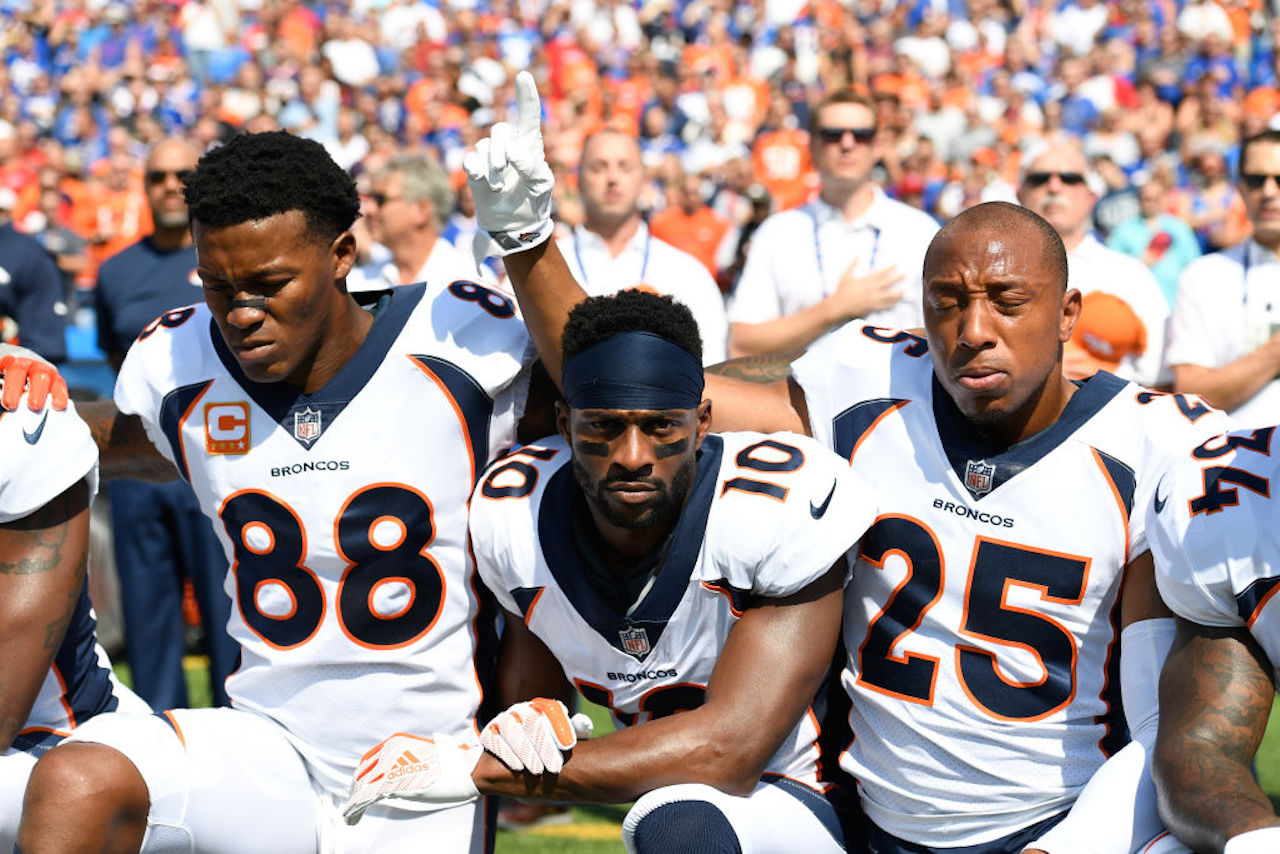 There was a kind of poetic justice in witnessing professional football players — muscled, tough paragons of All American manhood — display their defiance to President Donald Trump on Sunday. Trump is, after all, obsessed with masculinity, competition and power, from his anxiety about the size of his penis, to his boasts about groping women. But even though he reveres the most traditional and constricting definition of manliness, he’s rarely lived up to it himself. He wormed his way out of military service, he inherited his money rather than earning it, and the closest he ever got to a gridiron was destroying the start up United States Football League in the 1980s.

Of course, until this past weekend, taking a knee — or #TakeAKnee as it’s now come to be known — had nothing to do with Trump at all. Last season, NFL quarterback Colin Kaepernick began to sit and later kneel, during the national anthem as a protest against police brutality and racism. His was not the first pro sports protest in the era of Black Lives Matter; players in the NBA and the WNBA had previously spoken out about the deaths of Michael Brown and Eric Garner at the hands of police. Nor was Kaepernick’s act particularly galvanizing at the start — only a handful of players followed his lead last year, and he’s since been blacklisted by the NFL.

But Trump’s comments late last week changed all that. On Friday, Trump gave a red meat speech directed to his far-right base at a rally in Alabama. It started with his complaint that football wasn’t violent enough. (This despite the sport’s dreadful epidemic of head injuries.) Then it devolved into an attack on NFL players who took a knee during the anthem, filled with racially-charged language: “those people” who “disrespect our flag.” (Emphasis mine.) After his earlier defence of the white supremacists who marched in Charlottesville, Va. this summer (some were “fine people,” he said), Trump’s point was clear: white racists have a right to protest, but the predominantly black players of the NFL seeking to stop racism don’t.

It was typical Trump tough talk: belligerent, self-aggrandizing and menacing. Players who took a knee should be fired, he said. He sounded like every jerk who’s ever mouthed off in a sports bar about some athlete’s fumble, when he himself has never thrown a ball or run a lap.

In response to Trump’s sore-loser rantings, more than 130 peacefully protested on Sunday, kneeling or raising fists or linking arms. A few teams remained in their locker room during the anthem, because they didn’t want their teams to be divided. Some athletes who stood during the anthem expressed support for their teammates’ right to protest. What was striking was the thoughtfulness and deliberation in their actions, their tolerance and respect for each other’s convictions.

There was some confusion, however, in this scaling up Kaepernick’s demonstration — the purpose of his original protest against police violence and racism was muddied. “Taking a knee,” in some cases, was translated into a vague, defanged call for “unity” and “brotherhood.” And then there was the spectacle of the very same team owners who’d contributed millions to Trump’s campaign now standing alongside their players. Were they supporting the call for racial justice, or were they simply mad that Trump encouraged his supporters to boycott the NFL? As NFL Hall of Famer and sports analyst Shannon Sharpe said on Fox Sports, “while some might be moved by the conscience of these NFL owners, it wasn’t their conscience that moved them. It was the cash.”

Football is a troubled and troubling sport. Due to the high risk of injury and the exploitation of its players, Malcolm Gladwell once compared it to dogfighting. At a collegiate level, violence against women is common, and the NFL willfully ignores domestic abuse by its players. Author Steve Almond (one half of Dear Sugars), wrote in his book Against Football, “I happen to believe that our allegiance to football legitimizes and even fosters within us a tolerance for violence, greed, racism, and homophobia.”

All of which makes last weekend’s protests even more remarkable. For many of the players involved, a new political consciousness and boldness has emerged, revealing a better, more positive side of the sport. It was inspiring to see players use their platform to be role models — particularly for young men and boys — in sticking up for civil rights. In a beautiful New York Times piece about how he came to the decision to take a knee alongside Kaepernick last year, San Francisco 49er Eric Reid said that he and his former teammate felt they had a responsibility, “to speak for those who are voiceless.”

Trump, meanwhile, huffs and puffs with all the aggrieved white male rage he can muster. He’s desperate to be seen as the most noxious version of “a real man” — you can hear it in his bullying speeches, or his “locker room” talk about women. But real leadership, real strength and real power doesn’t sound like Trump. It sounds like Reid: “I want to be a man my children and children’s children can be proud of, someone who faced adversity and tried to make a positive impact on the world,” he writes, “a person who, 50 years from now, is remembered for standing for what was right, even though it was not the popular or easy choice.”