The CBC and other media outlets said the proposal was better than He Zi's Olympic win, proving that a diamond ring is still seen as the ultimate prize for women. 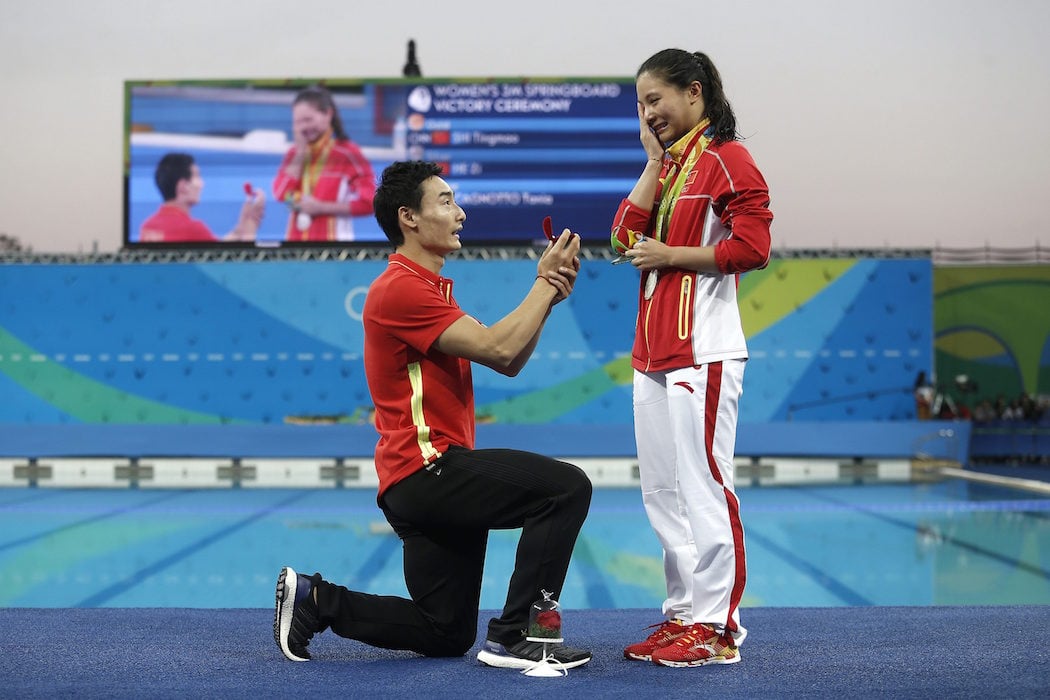 Chinese Olympic diver He Zi received a proposal from her boyfriend after her silver win. Photo, Marcos de Paula/AGIF/REX/Shutterstock.

He Zi can launch herself backwards off a three-metre springboard, fearlessly flip around several times in mid-air and then land in the pool beneath with barely a splash. She does this so very well and so very consistently — not just in the three-metre, but also the one-metre and synchronized — that at the age of 25, the Chinese diver has earned multiple gold and silver medals in international competitions. She is a superstar. At the Olympics this past weekend, she earned her second silver in three-metre springboard, a huge accomplishment.

But Google He, and the top results have little to do with her diving feats and the hours and years she spent training. No, He’s defining Olympic moment was defined instead by her boyfriend and fellow diver Qin Kai, when he proposed to her right after she won the silver medal. “What’s better than an Olympic medal?” tweeted the CBC. “A proposal!” NBC, whose commentary has been bro-ishly sexist throughout the Games, gushed, “Chinese diver He Zi wins silver in 3m, gold in love with marriage proposal: Winning a silver medal wasn’t the top highlight for Chinese diver He Zi.” The BBC even laid out a totally unironic sports style play-by-play of the moment, breathlessly captioning a series of photos of the red velvet box, the drop to one knee, the happy tears. It initially called the proposal “a bigger prize” than He’s silver win, but now seems to have revised that to “another prize” — perhaps in response to complaints from readers.

Sure, some people saw the moment as sweet and charming. Others felt it was a lovely reminder that there is more to life than the Games. But to me, it felt creepy. By making the proposal public, Qin stole He’s moment, and that of gold medalist Shi Tingmao and bronze medalist Tania Cagnotto. Then, in turn, the media coverage glossed over a story of professional triumph and turned it into a gooey fairy tale, perpetuating the stereotype that a woman’s highest achievement is snagging a man.

It’s tough to defeat the belief that, for women, getting engaged is the equivalent of stepping to the top of life’s podium. The marriage myth is so entrenched that it persists despite the fact that fewer and fewer women are choosing to get hitched. One-quarter of Canadian households are made up of people living on their own. In the U.S. today, only around 20 percent of Americans under the age of 29 are wed, compared to nearly 60 percent in 1960. Two popular books — Rebecca Traister’s All the Single Ladies and Kate Bolick’s Spinster — chart the rising power and empowerment of unmarried women. And yet, we are still supposed to coo and cheer the moment a woman accepts a ring over everything else in her life. This was brilliantly spoofed recently by a woman in California in a post on Facebook revealing a job offer with all the corny clichés of a engagement announcement: a series of photos of her cuddling in bed with her job offer, gazing dreamily at a sensible pair of office pumps, holding hands with a car pool mate. Her point was to show that marriage, while delightful for some, was not the end goal for all women.

Related: Kate Bolick on why single is a mindset, not just a relationship status

Reporters at the Olympics should read the post. At the press conference after He’s diving competition, the only questions posed to her and her teammate Shi — who had just won silver and gold for their country! — were about the proposal. And there was another famous Olympic engagement last week. That one, between Brazilian rugby player Isadora Cerullo and her girlfriend Marjorie Enya, got similar play in the press. The LGBT site Outsports noted that Brazil’s team hadn’t done well in competition, then added, “But who cares? Cerullo is getting married. The gold medal would have been just the consolation prize anyway.” 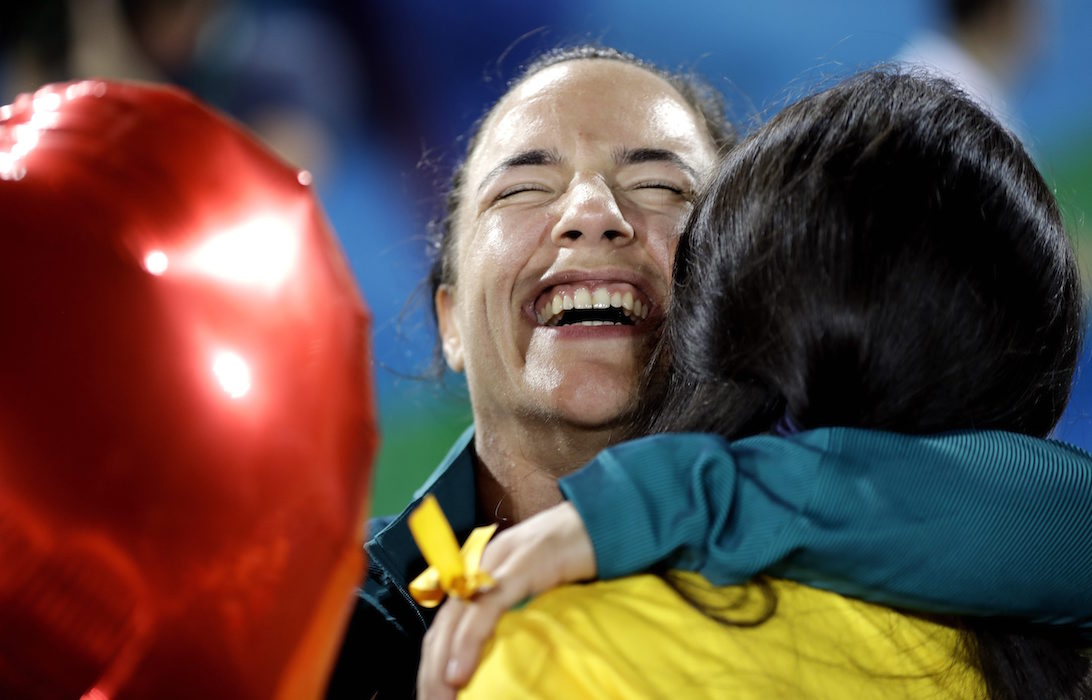 While it’s weird and diminishing to suggest that for an elite athlete a gold medal would ever be “a consolation prize,” at least in this case there’s a greater political context. Unlike straight women, lesbians aren’t subject to societal pressure to settle down. Just the opposite — in many of the countries represented at the Olympics, two women getting married might cost them their jobs, alienate them from their families and even land them in jail. Homophobia has been a serious factor in the Games, and the moment between Ceruollo and Enya, including a passionate smooch and the slogan “love wins” as a call back to the recent mass shooting of predominantly queer Latino people in Orlando, made for a powerful counterpoint.

Still, as heart warming as Olympics love stories — straight or gay — may be, I’d prefer to spend the Games celebrating women’s athletic excellence and the hardware around their necks, not swooning over the rocks on their fingers. But don’t take it from me, take it from He. Once she’d had a chance to recover from the competition and the proposal, she seemed to back away from the media-created Disney princess ending to her Olympics. “I didn’t expect to marry myself off so early,” she said at a press conference. “I feel it is too soon to get married and to get a proposal.”

More columns by Rachel Giese:
Women are absolutely crushing the Rio Olympics — and it’s a thrill to watch
Canada’s MMIW will be the focus of a doc backed by Zoe Saldana
Two recent sexual assault verdicts offer hope