And four more awesome things that happened this week. Because we could all use more good news. 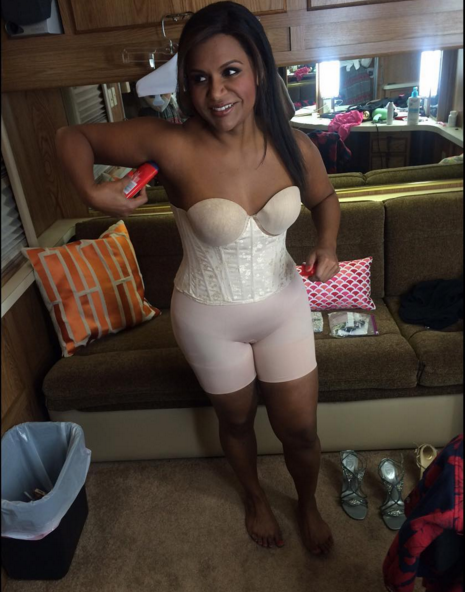 Woot! Mindy Kaling is America’s sweetheart in Spanx.
The showrunner and star of The Mindy Project shared an endearing (and relatable) behind-the-scenes snap in her shapewear, showing off Hollywood’s not-so-sexy side. Kaling was getting ready to present an award at the the Costume Designers Guild Awards, when she posted to Instagram with caption: “Awards Show prep. America’s sweetheart.” Way to keep it real, girl.

Woot! Canada’s “Dancing Barista” appeared on Ellen.
Seventeen-year-old Sam Forbes, who shot to viral fame after being filmed dancing on the job at Starbucks, stopped by DeGeneres’ own daytime dance-fest this week. Forbes, who has autism and uses dance to help him concentrate, left with a trip to Japan and no doubt a whole whack of new admirers. (Watch the heartwarming footage here.)

Woot! Someone is finally addressing the diversity gap in film.
Not only did the New York Times run a thoughtful feature on the diversity deficit in Hollywood this week, a group of notable women have banded together to do something about. We Do It Together is a non-profit that will produce and finance films, documentaries and TV series with the aim of empowering women. And the organization has a number of powerhouses on its board, including Queen Latifah, Freida Pinto and Jessica Chastain. Their first film will be announced in Cannes this May.

Woot! Stressed-out shelter dogs are given some love.
The Humane Society of Missouri has kids aged 6 to 15 reading to dogs in shelters in an effort to help the animals become more social. The most anxious dogs are targeted by the program but the organization told The Dodo all dogs seem to be benefitting from being read to. In Ontario, the Kitchener Library plans to start a similar program this spring.

WTF! An Ottawa woman won a labour grievance against her gross coworker.
Line Emond, a data quality manager at the Parole Board of Canada, is now free to work in a different building than a fellow employee who was prone to making weird noises, swearing, passing gas with abandon and — get this — washing his bare feet with vinegar in the office. (Puts your loud-chewing desk neighbour into perspective, doesn’t it?)