Hate speech and hateful legislation are not the same as gunning down a roomful of people. But there is a relationship between them. 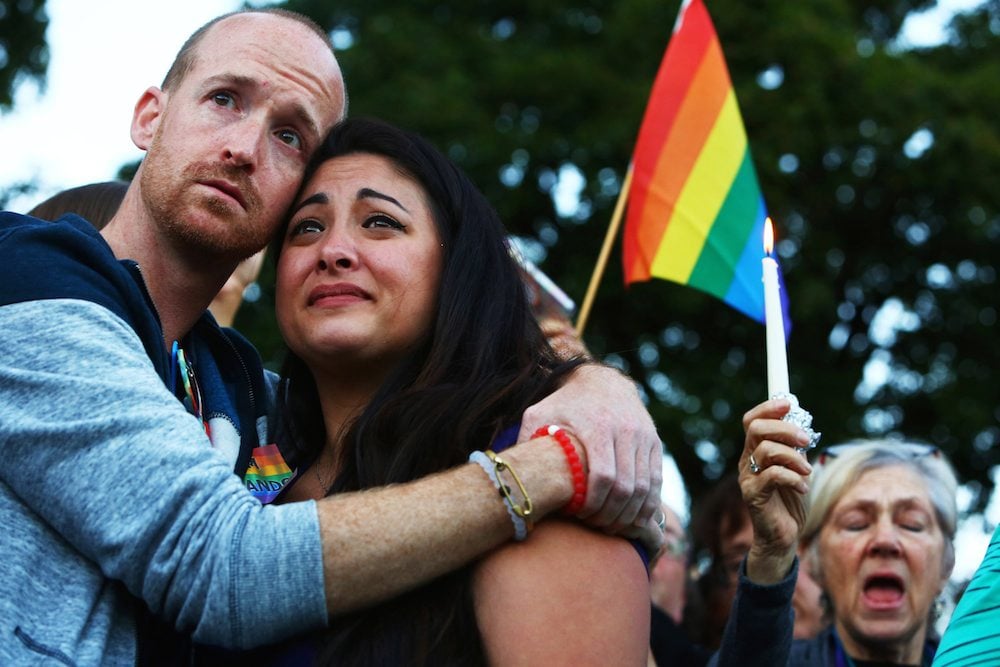 A vigil in Seattle for the victims of the Orlando shooting. Photo, Genna Martin/seattlepi.com via AP.

Edward Sotomayor Jr., 34. Stanley Almodovar III, 23. Luis Omar Ocasio-Capo, 20. Juan Ramon Guerrero, 22. Luis S. Vielma, 22. The names and ages of the people murdered in a mass shooting at Pulse, a gay nightclub in Orlando, Florida, have slowly begun to emerge — many of the victims were young Latino men, who were gathered for the club’s legendary Latin night. These are just five of the 50 people killed, another 53 have been injured. Two communities — gay and Latino — devastated. So many names, so many lives gone.

How do you mourn a loss like this? How do you take in the scale of this tragedy? For gay, lesbian, transgender and bisexual people of a certain age, grief this size is familiar, as is the loss of people who’ve barely entered adulthood. My first job in journalism was at Xtra, a gay and lesbian newspaper in Toronto, and one of my tasks was to oversee the obituaries. It was the late 1990s, when antiretrovirals were still in the trial stages and HIV/AIDS was fatal. Each week, I filled my pages with the names and ages of the dead. Like those listed above, they were largely in their 20s and 30s. I once asked an older male colleague a passing question about his friends. “I don’t have any friends,” he told me. “I’ve buried all of them.”

Much has changed since then, of course. Civil rights and protections for LGBT people have expanded through most of the Western world. And the vigils held around the world on Sunday night for those slain in Orlando were deeply moving for their inclusiveness, a reminder that this sorrow and anger is not borne by gay people alone. Straight people have come forward in solidarity, offering love and comfort. Most critically, in Orlando straight people have lined up to donate blood which is desperately needed by the injured — an act of charity that is denied to gay men, who are prohibited from giving blood by the U.S. Food and Drug Administration. (Not everything has changed, it seems. And Canadians shouldn’t feel superior: a similar ban exists here.)

In his remarks, President Barack Obama embraced the LGBT community, saying “this is a sobering reminder that attacks on any American — regardless of race, ethnicity, religion or sexual orientation — is an attack on all of us and on the fundamental values of equality and dignity that define us as a country.” It’s a stark contrast to the sentiments of President Ronald Reagan, elected in 1980, who was in office nearly five years before he publicly uttered the word “AIDS,” a disease that would kill over 650,000 Americans. (There are audio recordings of the Reagan administration and the White House press corps actually laughing at AIDS deaths in the early 1980s.)

Equally powerful has been the resistance to the hatred directed towards Muslims, who have been targeted on social media and elsewhere with threats and slurs. At the vigil in Toronto, a Muslim prayer was offered in Arabic to the victims, and Ontario Premier Kathleen Wynne, who is a lesbian, told the crowd “homophobia cannot be fought with Islamophobia.” While the shooter reportedly pledged allegiance to ISIS in a 911 call before the attack, his actions are not in any way reflective or representative of Muslims or of Islam.

However, if we are to understand what happened, and possibly prevent another tragedy of this kind, it’s necessary to consider the context of the shootings, to understand the culture and conditions that gave rise to them.

One factor is America’s pathological relationship to guns. In his eight years in office, President Obama has had to address mass shootings 15 times. Despite this epidemic of gun violence, the killer in Orlando — a mentally unstable man who was known to the FBI — was still able to legally obtain an AR-15. That type of gun has been used so frequently in massacres like the one in Orlando, that the Washington Post has called it “the mass shooter’s weapon of choice.”

Florida, where New York-born shooter grew up and made his home, has the largest gun-owning population in the U.S. and is among the most lax when it comes to gun control. Recall that the state’s Stand Your Ground laws helped to acquit George Zimmerman for killing Trayvon Martin, an unarmed black child, in 2012. At this very moment, the state Supreme Court is deciding whether to allow people to openly carry firearms in public. The state’s reverence for its right to bear arms was best summed up by former governor (and erstwhile presidential candidate) Jeb Bush. In February, he tweeted a picture of a monogrammed gun with the caption “America.”

Florida also has a long history of oppressing LGBT people, from the 1970s Save Our Children movement (an anti-gay-rights campaign that argued that gay people were pedophiles out to recruit children) to more recent — and just as vicious — campaigns to ban same-sex marriage and adoption by gay and lesbian parents. (Both are now legal in the state, due to court rulings.) Want to know just how spiteful Florida legislators can be? In 2010, a district judge ruled that the law prohibiting gay Floridians from adopting children was unconstitutional — but the state has kept it in the books for symbolic reasons. It has similarly kept laws against gay sex (ruled unconstitutional in 2003) in the books as well. Meanwhile, in part of the state, it’s still perfectly legal to fire an LGBT person or deny them housing because of their sexual orientation or gender identity. Last year, a bill that would have made it illegal for trans people to use washrooms that did not match their gender at birth, was narrowly defeated, and trans people in the state still fear for their rights and safety.

None of this is to say that anti-gay laws and anti-gay sentiment is equivalent to a mass murder. Hate speech and even hateful legislation are not the same as gunning down a roomful of people. However, there is a relationship between the two. At the Montreal Massacre in 1989, 14 women were shot and killed at École Polytechnique by Marc Lepine, who screamed, “I hate feminists” before firing. At the time, there was a debate about whether this was an isolated act by a mentally unstable person or whether it was an extreme and violent expression of a more generalized sexism — as if it couldn’t be both. Similarly, the attack in Orlando is both a singular act and a radical expression of generalized homophobia. What did those determined to deny LGBT people rights and dignity imagine would happen? When you gin up hate and fear towards a particular group of people, when you call them deviant and predatory, when you say their relationships are less worthy of respect and protection, it doesn’t exist in isolation. That hate has an impact. It makes violence towards LGBT people much more likely.

Violence has always been a threat in our community — and that violence, it should be said, has often been at the hands of the state and its agents. Our bars and clubs have been our refuges, but also the places where we have been targeted. Pride Day, after all, marks the anniversary of the Stonewall Inn riots of June 28, 1969. On that night, gay men, lesbians and transgender people took to the streets to fight police who had raided the gay tavern to arrest them for the sole crime of being queer. It’s no coincidence that the birth of the modern LGBT movement started outside a bar. These places have historically been the rare space where we could be ourselves, fall in love, look after one another and feel that we had worth and value.

We tell younger gay people that “it gets better” — and it does and it has. But then, on the weekend, a man walked into Pulse Nightclub armed to the teeth. At 2am, the energy would have been ecstatic, sweaty and joyful. Most of the people in the club at that hour were young, and likely some of them newly out and still experiencing the thrill of being among other people like them. I remember being 22 and dancing in a gay club at 2am — it was like finding home and finding heaven and finding myself all at once. The people at Pulse would have felt so free and alive. They would have felt so beautiful and safe. They wouldn’t have seen the shooter coming at all.

More column by Rachel Giese:
Men who intervened in Stanford sex assault show we can all be heroes
Can the Conservatives appeal to women? Well, they’re trying
Toronto Raptors: role models for modern fatherhood