Newfoundland teen responds to bullies in the coolest way ever

Here's Lynelle Cantwell's brilliant response to a cruel poll about the "ugliest" girls at her high school.

Not everyone has the guts to stand up to high school bullies. But Newfoundland teenager Lynelle Cantwell showed some serious courage and confidence this week when she shut down the haters at her school.

Earlier this week, the Grade 12 student at Holy Trinity High School in Torbay, Nfld. found out she was ranked as one of the “ugliest girls at hth” in an anonymous Ask.fm straw poll. After some careful thought, she fired back. 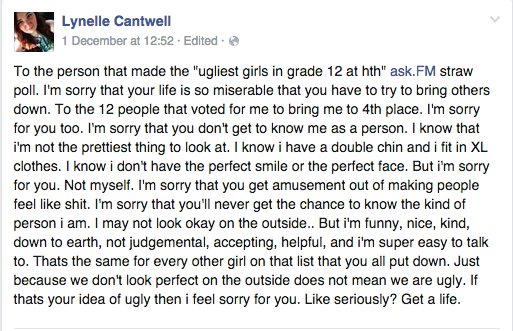 Her post called out the shallow, conventional beauty standards those who ranked the girls appeared to follow. “I know i have a double chin and i fit in XL clothes. I know i don’t have the perfect smile or the perfect face. But i’m sorry for you. Not myself.”

In an interview with CBC Newfoundland, Lynelle said, “it outraged me … all of these girls are hurt because of this one person who has no heart or sympathy for anything…. I wanted to be the bigger person, and instead of fighting fire with fire, I decided to fight it a different way and make something that was really negative into something really positive,” she said.

Positivity has come Lynelle’s way in spades. Her post has been shared more than 4,000 times on Facebook. Friends, family and total strangers have send hundreds of messages of support. We’ll add to the love: Props to you, Lynelle, for shutting down the haters and empowering others.