The Conservative immigration critic tells Chatelaine why Canada needs to take action to help members of the religious minority group. 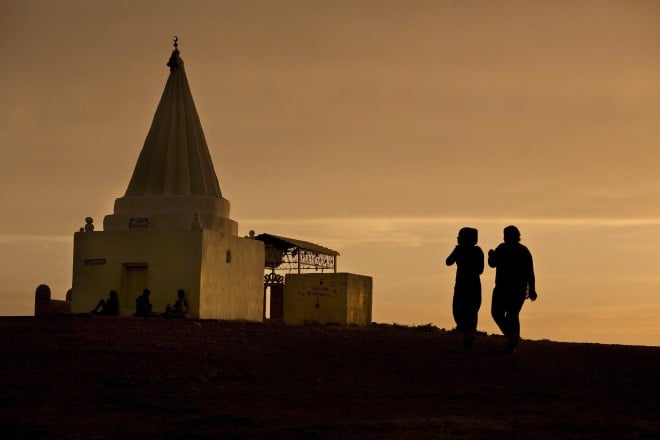 Women visit a Yazidi shrine overlooking at Kankhe Camp for the internally displaced in Dahuk, northern Iraq in May 2016. Maya Alleruzzo/AP.

Last month, the United Nations declared the killing of thousands of Yazidi people by ISIS a genocide — and urged member nations like Canada to “accelerate the asylum applications.” Yazidis are a religious minority concentrated in northern Iraq and are being targeted because their faith is seen to be at odds with ISIS’s ideology of Islamic extremism.

To map out how Canada will handle Yazidi asylum seekers, the House of Commons immigration committee heard testimony last week from NGOs and survivors, including German-based 22-year-old Nadia Murad Basee Taha, who was held captive for three months and raped multiple times a day. There won’t be a full report on the committee’s hearings until parliament resumes in September, but foreign affairs minister Stéphane Dion has acknowledged the genocide, something the UN asked the international community to do.

Meanwhile, Conservative immigration critic Michelle Rempel has urged her Liberal counterpart, Minister John McCallum, to take swifter action. Rempel, who has worked to keep this issue on the government’s radar, has been deeply concerned about the Yazidis since the fall of 2014, not long after Yazidi Iraqi MP Vian Dakhil made an emotional plea to the Iraqi parliament to intervene and save her people. Next week marks two years since ISIS militants stormed their communities in the Sinjar Mountains — an invasion that led to the massacre of more than 5,000 people, and the abduction of thousands of women and girls into sexual slavery. Chatelaine spoke with Rempel about what Canada can do.

What’s motivating you to help the Yazidis?
[We need to] stand up when gross violations like this happen, when you’ve got a group of people who are basically being treated as a subspecies because of their ethnicity or their religion. We actually do have a duty to act because it threatens our freedom too. I just don’t want to have to 20 years from now — or even 10 years from now — apologize to all of humanity for our collective lack of inaction on this. I couldn’t live with myself if I was silent on this issue.

Germany has taken in more than 1,100 Yazidi women and girls and last month you pointed out Canada has only processed nine refugee claims. Why hasn’t more happened yet?

It boils down to the government [needing to] come out and say they have a responsibility to prioritize victims of genocide, now that genocide has been declared. That’s something that has not happened and that’s what every single group who came in front of the committee said: The government needs to say they’re going to prioritize these people because to date they have not. The second component is there are systemic process issues to bringing persecuted minority groups into Canada [through both government-sponsored and privately sponsored efforts].

When we were in power, we instructed the [citizenship and immigration] department to have areas of focus for persecuted ethnic and religious minorities so they could work with the UN and their own systems to ensure those people were coming to the top of the pile. Either the UN has to do a better job of putting [Yazidis] on the lists or we need to do something else.

Most of the Yazidi population lived in and around Sinjar, which was levelled by ISIS two years ago. Have those who were forced from their communities moved to camps outside the country or are they still in Iraq?

They’re in Iraq, still — they’re internally displaced people. In order to claim refugee status, you usually have to be outside of your country because the argument is that you had to leave your country because you were being persecuted there. Section 25 of the Immigration Act allows the minister to override traditional processes to be able to bring people out. You can’t do this in all situations, but in this situation, my sense is the government of Iraq would be a willing partner in trying to evacuate these people to safety. The girls are still in captivity. There are thousands of them still being held as sex slaves.

Is there anything Canadians can do to help?

You can donate to Operation Ezra, based out of Manitoba. They’re trying to coordinate a number of groups that are sponsorship holders, to fundraise to bring these women and girls and Yazidis to Canada. As Nadia said at committee, the world cannot be silent on this. So writing to your MP, writing to the minister — these are important things to show that there is a political desire in Canada and a political appetite to overcome the inertia of bureaucracy. There are going to be rallies happening around the world on Aug. 3, which is the second anniversary of the genocide. That’s something I’m going to try to organize in Canada just to keep the awareness on this issue — it’s our moral imperative. That [NDP MP and fellow critic] Jenny Kwan and I basically agreed with 100 percent of each other’s recommendations on this, I think, shows it’s non-partisan. We just need to bring these girls to Canada. Full stop.