Jian Ghomeshi's lawyer spoke with Peter Mansbridge about "betraying" women, her critics and her unwavering belief in the justice system. 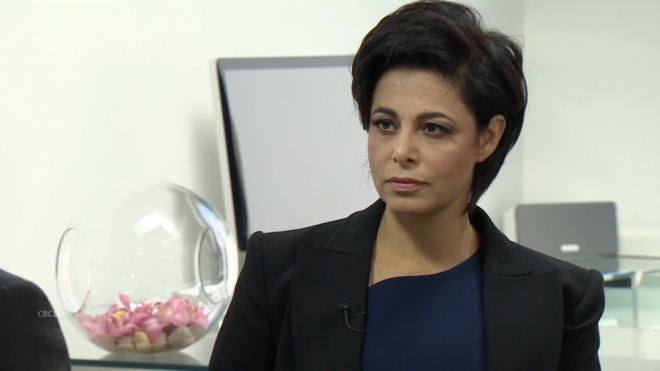 Toronto criminal defence attorney Marie Henein has broken her silence about the highest profile case of her 25-year career — the trial of former CBC broadcaster Jian Ghomeshi. Four days after winning the most-watched sexual assault criminal proceedings in recent Canadian history, Henein sat down with CBC chief correspondent Peter Mansbridge “reluctantly” to discuss the justice system and her role representing Mansbridge’s former colleague. The Crown has 30 days to appeal the verdict, so Henein would not discuss specifics of the case. But the wide-ranging, 20-minute interview revealed a lot about her views of the criminal courts, feminism and the social media haters. Here are the highlights:

She rejects the idea that she “betrayed women”

“I respect their right to say it. I don’t respect their opinion or agree with it. I know who I am, I know what my beliefs are. There’s no question in my mind. I don’t feel the need to justify myself.” She went further to say there’s no way a man would be seen in the same light. If two men aren’t of the same mind on an issue, “you’re not viewed as a person who betrayed their gender, you’re viewed as people who disagree.”

Mansbridge asked if the “he said, she said” nature of sexual assault complaints is problematic. Most cases, Henein responded, are hinged on credibility and circumstantial evidence.

“If you can’t look at the credibility of a person, or the reliability of a person or inconsistency or what their explanations are for saying certain things, then what we should probably do is just not have a system at all, and you can just say what you wish and we’ll go straight to conviction. We don’t want that.”

She has an unwavering belief in the Canadian justice system

Justice was “absolutely” served in this case, she said, and justice does not mean getting the result that you want — it means getting a fair trial.

“It is pretty significant that in one of the highest profile cases, in one of the cases where everybody had an opinion, sitting on their couch, tweeting it out in 140 characters or less, where people expressed opinions not having heard a word of evidence, that you knew that you could walk into court and that there would be an impartial person that would decide on the evidence,” she said. “That happens not just in this case, but each and every single day….that’s something we should be extraordinarily proud of. That means every single one of us has a fair shake.”

She spent the trial blocking out the haters

Henein was a “polarizing” figure in the coverage of this trial, Mansbridge said, before asking about her comfort level with that. “I can’t focus on that. It’s not a matter of my comfort level. You would never go to a surgeon and ask them, ‘How comfortable are you [to] operate on me?’ You expect them to do the job,” Henein said.

Mansbridge later read out three critical social media comments as the camera zoomed in on her face. “I would have quit this trial a long time ago if I was listening and waiting for people’s approval,” she responded.

Related: Witness 1: What I wish I’d known before testifying in the Ghomeshi trial

She had some choice words for prominent critics

Henein’s sharpest dig was in response to political and legal figures who quickly supported social media campaigns including #IBelieveSurvivors. “Hashtag ‘I believe’ is not a legal principle, nor should it ever be,” Henein said, adding presumptive belief is a damaging concept in general.

What really worries her is people like federal NDP leader and lawyer Thomas Mulcair hopping on this bandwagon with little regard for the evidence presented in the case. “When a politician weighs in, that’s a little bit more concerning to me because you’re a person who should be more knowledgeable about what you’re commenting on,” Henein said.

“The profile and nature of it didn’t influence you at all?” Mansbridge asked. Not the way you might be thinking, Henein replied. “It would influence me not to take it at all, actually.”

The amount of scrutiny has been “extraordinary and crushing” for Ghomeshi, she said. “It would be devastating to anybody.” She’s direct with her clients when advising them on the impact a trial will have: “You will never ever be the same again. I cannot bring you back to the day you sat at home and you were not charged.”