Jian Ghomeshi has re-emerged with a strange new podcast. Who exactly is he talking to?

The disgraced former CBC host was acquitted of sexual assault charges over a year ago. Now, he's attempting a comeback with a new media project. Is it naive to assume no one will listen? 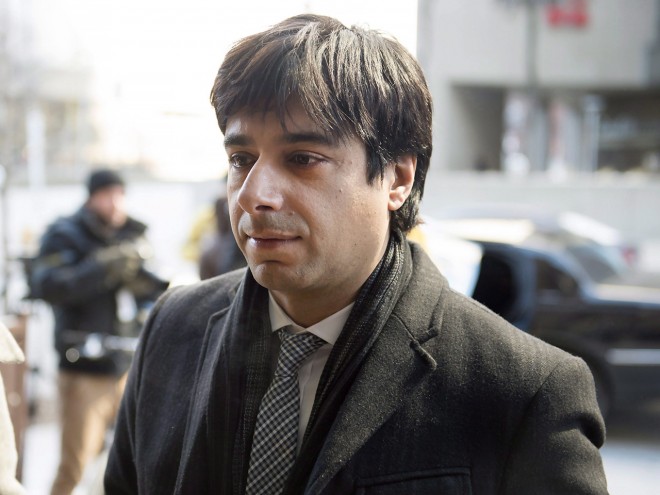 Jian Ghomeshi during his 2016 trial. (Frank Gunn / The Canadian Press)

A little more than a year since he was found not guilty of sexual assault (but less than 365 days since he publicly apologized for being a “demeaning” boss), Jian Ghomeshi is attempting a comeback.

Hi. For those interested, here is something I’ve been working on… https://t.co/IksyTcjAlZ

The disgraced ex-CBC broadcaster resurfaced on Twitter Monday morning to announce a “new media creative project” podcast he calls The Ideation Project. His first topic? Exiles — a monologue focused on immigration and refugee politics (with only veiled references to being exiled in the eyes of the public). Ghomeshi coins words like “nowhere-ian” and perpetrates many bad rhymes in his trademark baritone. The site also promises original music (it’s unclear whether it would be written and performed by the former Moxy Fruvous musician) and encourages “conversation” that goes beyond what’s possible in “a 140-character environment, [where] nuance is often a casualty.” (Much of his sexual assault trial was covered, in-depth, on Twitter.)

Ghomeshi knows he’s got a small but devoted batch of defenders on that platform (and beyond it), who see him as a victim of social-media mob justice, and who staunchly view his acquittal as definitive proof of his innocence. Despite those who couldn’t fathom a comeback for Ghomeshi — certainly not in Canada — he wouldn’t be the first high-profile personality to recover from allegations of sexual violence. (Exhibit A: President Donald Trump.)

So this podcast project might well be a referendum on the strength of that audience beyond the echo chamber that is Twitter, where the reaction Monday didn’t require much nuance — and could be summed up with a resounding “Nope.”

Ghomeshi showing up just before Easter. Dude thinks he's Christ or something. Crawl back under that rock, boyo. pic.twitter.com/bBKEo5rca1

DON’T
FEED
INTO
HIS
APOLOGY
TOUR
HE’S
EARNED
NOTHING pic.twitter.com/105TYqhMC5

wait, who's been exiled?

More:
‘Don’t Photoshop our Anne’! Canadians react to American Anne of Green Gables posters
Amanda Lang: Have we made life way too comfortable for our kids?
Subscribe to our newsletters