On Sunday night the community of Humboldt, Sask. held a vigil for those injured and killed in Friday’s bus crash, which claimed the lives of 15 people. This is what Humboldt Broncos team pastor Sean Brandow said:

I really wanted to wear a suit but apparently that was 35 pounds ago, so my pants don’t fit. So in honour of Mr. Trudeau I wore my fancy socks but you can’t see them because of my cowboy boots. A real Saskatchewan thing.

Friday I didn’t want to go the game, but my kids begged me to go to the hockey game. We travelled up and arrived at the scene shortly after the bus. And walked up on a scene I never want to see again to sounds I never want to hear again. To greet Chris and just feel so lost. And to go the hospital and walk around and just hear groaning and panic and fear and distress and pain, just nothing but darkness. To sit and hold the hand of a lifeless body.

I received thousands of texts. I looked over at Chris and his phone was dead and my phone was dead and we’re trying to give answers. Thousands of texts, ‘heh we’re praying of you,’ ‘we’re thinking of you,’ ‘be strong.’ And we needed those, your families, they needed those texts, we needed to hear those things, that the support was much bigger than me and Chris and the families.

I had understood the support of people and I needed that, and you need that, you family members, you need that, you need to hear that people love you, that people care, that people are praying, that you’re supported, that you are loved, you’ll be looked after in the future. Those are important things. But when it was so dark, I needed to hear from God. And only four times, and that’s all it took — four words from God were bigger than a thousand words from any human being.

Someone reminded me that there’s more to that Psalm than ‘we walk through the valley of the shadow of death.’ You need to finish the statement, someone told me. ‘I will fear no evil because you’re with me.’

How You Can Help Support The Families Of The Humboldt Broncos

When we needed comfort and refreshing and came around the church this morning, it was good to hear from God again. Someone to read a Scripture. I just want to hear from God.

The second question is: Where. Where was God? That question has two answers. God is on the throne and God is with the broken-hearted. We know that God is on the throne, Jesus walked this earth, he died, he was buried, he rose again. It says in the scripture that he is now seated at the right hand of the Father, in control of setting up our leaders, putting people in the place where they need to be at just the right time, for just the right purpose, making sure that things line up according to his plan.

I don’t claim to understand how this seems like it’s in God’s control at all, but it is. He’s still on the throne, he’s still God. You know, I asked the question as you look at God on the throne, it’s easy to look at God from a distance but the second part of that question of where is God is that he’s with us.

I’m going to read Psalm 23 again and I want to read another Psalm with you. In Psalm 23 it says: The Lord is my shepherd – he’s mine. ‘I lack nothing. He makes me lie down in green pastures. He leads me beside quiet waters. He restores my soul. He guides me along the paths of righteousness for his name’s sake and even though I do walk through the valley of the shadow of death, I will fear no evil because you are with me. Your rod and your staff, they comfort me.’ The rest of the Psalm continues on and it says we can dwell with the Lord forever.

So where was God?

Another Psalm, written by the man David, just like Psalm 23, who lost more than one son, wrote these anguishing words in Psalm 23 … He also wrote these: ‘The righteous are crying out and the Lord hears them. He delivers them from all of their troubles. The Lord is close to the broken-hearted. And he saves those who are crushed in spirit.’

How is it that God can be on the throne? What gives him the right? It’s because he walked with us. The Bible tells us that we do not have a God that is unfamiliar with what you’re going through. He suffered grief, he has wept, he has been betrayed by a friend, he has felt alone, he has felt lost, he wept in the garden, knowing what he needed to go through the next day. But the fact of the matter is God didn’t stay dead.

Jesus did not stay dead. Jesus himself goes back to Psalm 23, and he says to his disciplines who are listening to him in John chapter 15 verse 13, he says ‘I am the good shepherd,’ and the good shepherd lays down his life for the sheep. How do we know that God is with us in our suffering? Because Jesus was here, Jesus went through every bit of suffering before we ever did. We have someone that has gone ahead of us and before us into the heavenly realms and who now sits and intercedes on our behalf — we talk to Jesus, we commune with Jesus, we cry out to Jesus. And it’s in this time that we need a shepherd who has walked through this valley before, that can guide us.

Oh we need Jesus. We need to hear from God.

I think it’s pretty fitting the way everything is set up here. I sit right behind the bench, every game, I stare at the back of your players’ heads, just like I’m doing right now. I sit there because I want to see the names on their jerseys. I tell every team that comes through I’ve chaplained that there’s a name on the front of the jersey and there’s a name on the back of the jersey. The coach’s job and the GM’s job and really what this community is all about and really what everyone’s here for is the name on the front of the jersey. It’s huge, this team, this group of guys that all rally together around this one thing. I like to look at the names on the back of the jerseys and I think it’s really fitting now, I just want you to know that we hurt with you. Each name represents a family. 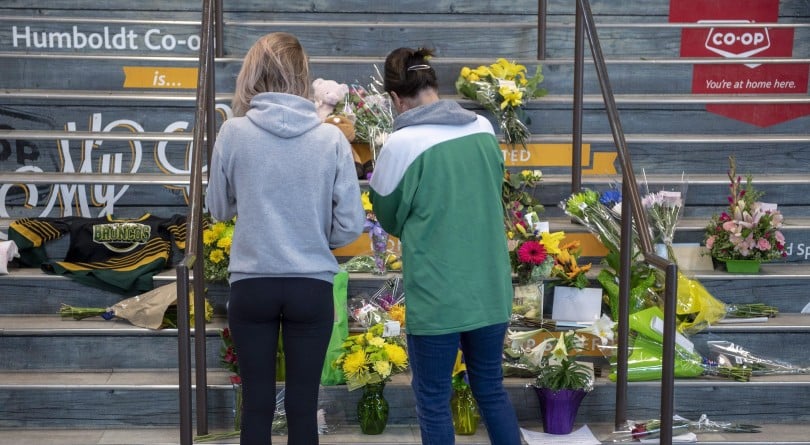 People gather at a memorial set up on the stairs that lead to Elgar Petersen Arena in Humboldt, Sask. on Saturday, April 7, 2018. (The Canadian Press / Liam Richards)

The Bible tells us that he knew your name, he knew them before they were born, he gave them the breath, he has ordained their days.

I talked to Darcy numerous times about what should we be doing at chapel and we sat down at the beginning of this year. It’s written on the back of the Broncos truck, maybe you haven’t even noticed, it says ‘character determines success.’ I’m not going to lie to you, your boys aren’t completely full of character — they cheat in every game that we do a chapel, I know that’s for sure — they’re imperfect, but Darcy has done an incredible job of bringing together men who desire character.

So we wanted to talk about character, and a week or two in, Darcy just turned to me and said, ‘Shawn, you’ve got to just tell them about Jesus, don’t worry about all the character, they need Jesus.’ I would do Darcy a dishonour and a displeasure, and I do would myself the same, and I would do anyone who is a Christian if I tried to give you pat answers, and here’s a list of things you can do to feel better. You need Jesus, he’s walked here, he’s walked it first and death couldn’t hold him. Death couldn’t hold him. He’s alive. And he sits at the right hand of God on the throne and he’s in control. It doesn’t feel like it, but he is…

I feel very much like one of our chapels today that we did in the pool. I told the guys that you get a little activity here, put out a bunch of pieces in the pool and they had to take turns as a team to dive under and swim over, and they could only do what they could do with one breath, and when they had to come up for air, they were done. I never realized how real that would be. Our life is just a vapour. 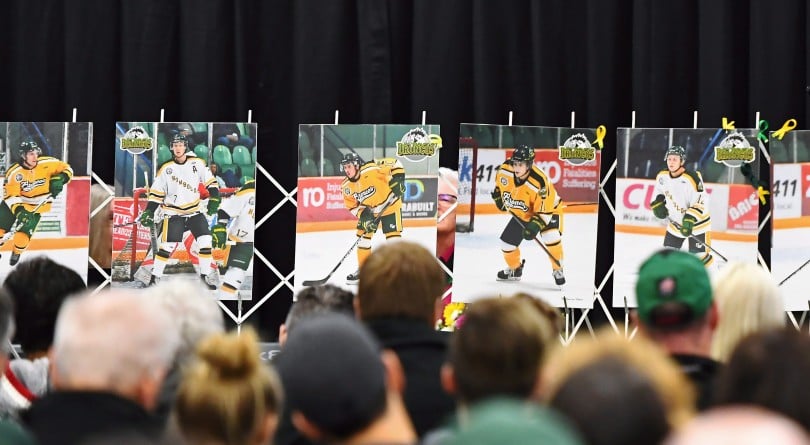 What will you do with one breath? Each breath that you have left, what are you going to do with it? Will you seek the God who has walked and who has died to show his love and his concern and his care for you? Or will you get bitter and angry and frustrated? Come to the God of comfort.

I want to read one verse, one verse. This is from Paul, the book of Romans, chapter 15, verse 13: ‘May the God of hope fill you with all joy and peace as you trust in him so that you may overflow with hope by the power of the holy spirit.’

I told my church this this morning, I’ve never felt so empty in my life. I needed to be reminded of Jesus, I needed to hear from God in this darkness. I didn’t have anything to give because I wasn’t full of hope myself. As the verse ends, you know, may God fill you with that. God can fill you up so that you can be a blessing to someone else, but if you don’t have hope, you can’t be a blessing to anyone else.

I want you to be full of hope, through the person of Jesus Christ. We receive him by faith, knowing full well what he has done and what he has accomplished.

I don’t have all the answers, but I do know that. I pray:

God we hurt. There are so many questions God, and so many unanswered things.

We just need you so badly. Be with each one of these players that fights, they are fighting for their lives, that are hanging on. Each of these families that mourns the loss of a son.

Oh God, be their hope.

Thank you for your love for us, displayed in the person and the purpose of Jesus Christ, we pray this in his name, wanting to honour him above everything else. In Jesus’ name, Amen.

As Jesus appeared to his disciples after he rose again, many of them wondered if it was Jesus. I’ve heard so many times: ‘I wonder if this community will ever be the same?’ You know how Jesus showed that he was who he said he was? His scars. A scar is something that is healed but still there. This isn’t going to go away. It’s not going to be as raw.

Can we heal? Yes.

Will the scar be there? Yes.