The leading Democratic candidate was asked if elected, whether she'd take a page out of the Canadian prime minister's book. 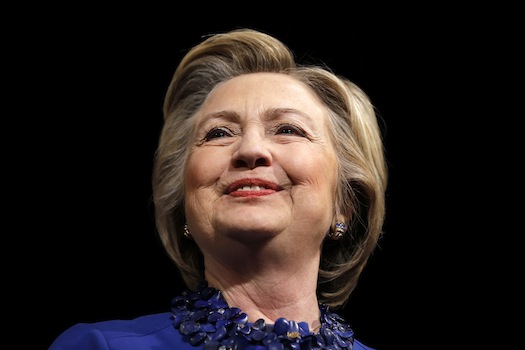 Justin Trudeau’s gender-equal cabinet could soon be replicated in the United States, depending on the outcome of the current American election. The poll-leading presidential candidate, Hillary Clinton, appeared to indicate her intention to follow suit when asked about it in a televised event on the eve of Tuesday’s five northeastern primaries.

A moderator had asked about the federal cabinet to the north: “Canada has a new prime minister, Justin Trudeau. He promised when he took office that he would have a cabinet that was 50 percent women, and then he did it. He made good on his promise. Would you make that same pledge?”

Clinton suggested she would: “I am going to have a cabinet that looks like America, and 50 per cent of America is women, right?” That prompted the MSNBC moderator, Rachel Maddow, to conclude, “So that’s a yes?”

Canada’s gender-balanced cabinet has gotten a fair bit of attention in the U.S., fuelled partly by how the prime minister responded to a question about it with a shoulder shrug and the sound bite: “Because it’s 2015.”

But in reality, Canada didn’t blaze that particular trail. Finland’s cabinet is 62 per cent female; Cape Verde’s is 53 per cent; Sweden’s is 52 per cent; and France’s is 50 per cent, according to last year’s statistics from the Inter-Parliamentary Union. Even within Canada, the first gender-parity cabinet was created not by Trudeau — but by the former premier in Trudeau’s home province of Quebec, Jean Charest.

Clinton remains the U.S. presidential front-runner, despite a tougher-than-expected primary challenge. She retains a significant lead over her more progressive challenger, Sen. Bernie Sanders, and is expected to add to it Tuesday in primaries in Maryland, Rhode Island, Pennsylvania, Connecticut and Delaware.

She has also consistently led general-election polls against the two Republican front-runners — Donald Trump and Sen. Ted Cruz — although she has performed far more poorly against less-successful Republican candidates like Ohio Gov. John Kasich and the dropped-out Marco Rubio.

Trump has also been asked about the Canadian cabinet — and he won’t commit to copying the Trudeau formula.

More:
Hillary Clinton proves you don’t have to be nice to be likeable
Moving away is no solution for the people of Attawapiskat
I tried to warn women about Jian Ghomeshi — and it nearly destroyed my life