Why The Capitol Hill Rampage Felt Like Déjà Vu

At Trump's inauguration in Washington, I saw first-hand how white nationalism was becoming uncaged. On January 6, it became a full-fledged movement. 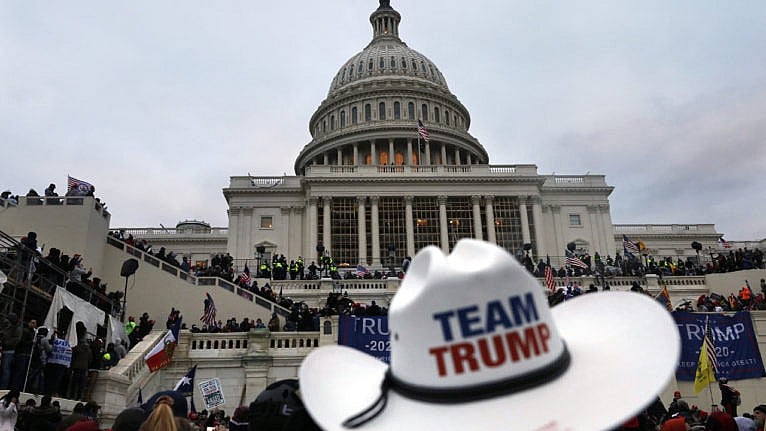 The streets started to empty out as sunset descended on Washington after a raucous day of protests. As I descended the stairs of a subway station, a sea of red MAGA hats came into view. Panic roiled inside me. I told myself I was overreacting, and fought the impulse to climb back up the stairs. I wondered if I should talk to some of the people standing near me about what their day was like, why they’d shown up at the centre of American power and what they’d hoped to see. As a reporter, my impulse is often to have as many conversations as possible, but I was truly uncomfortable—and deep down, worried about my safety. An eerie feeling coated me as I witnessed the result of U.S. President Donald Trump whipping up his fans, promising “from this day forward, it’s going to be only America first.” On the subway, I watched as a woman a few seats ahead of me on the train leafed through print-outs of Trump photos. This felt more like a cult than a presidency.

That scene isn’t the aftermath of last week’s “Save America March,” in which thousands arrived in Washington to attend a rally where Trump encouraged them to“fight like hell” against the “stolen” election, prompting a march to the Capitol. It’s from four years ago on Trump’s inauguration day, when I’d travelled to Washington, D.C. as a reporter for Chatelaine to cover the mood on that day, and the Women’s March that followed. For days after I returned from that reporting trip, I’d recount that feeling of unease to colleagues and friends; sometimes, some people gave me strained polite looks in response, as if that feeling were an overreaction. It was part of a wider insistence at the time by some that Trump’s call to “make American great again” was just a slogan, not a ceremonial uncaging of white nationalism.

Last week, while watching a roaring crowd run through the Capitol—ransacking offices, brandishing guns, carrying a Confederate flag, smearing feces on the walls—I realized it was likely those who held that strained expressions when I described my fears four years ago who were absolutely gobsmacked at what happened on January 6. That it was the same people shocked that Trump would go so far to undermine an election that he incited a raging mob resulting in five deaths. This denial of how extreme Trumpism has become goes all the way up the chain. In an attempt to calm the nation, President-Elect Joe Biden emphasized in a public address that “the scenes of chaos at the Capitol do not reflect a true America.” He characterized those involved as “a small number of extremists dedicated to lawlessness.”

Let’s be clear: there’s a direct line between those who celebrated Trump’s win four years ago and those who crusaded to the Capitol to keep him in power last week. His disdain for democracy and proclivities for fascism were either celebrated by his supporters or—just as damningly—readily ignored because his version of America suited them.

Nearly 63 million Americans voted for Trump in 2016. He had zero record of serving in public office at the time, but we knew enough about him then to know he was unfit for it. He was accused of sexual assault by multiple women. He said Muslims should be put on a registry. He cast undocumented people as “illegals” and murderers; Mexican immigrants as rapists. He pledged to build a wall between Mexico and the U.S. and have Mexico pay for it. The tough-on-immigration speech he gave in September 2016 in Phoenix earned praise from former Ku Klux Klan leader David Duke.

Many people—especially racialized and/or LGBTQ+ activists, writers and thinkers—rang the alarm. My concern then was not only the damage Trump would do, but that there were millions who voted for him knowing what he stood for, millions who either loved his vision for the country, or didn’t care enough about the people that vision cast aside.

Political observers here in Canada weren’t immune to this line of thinking, or this kind of willful ignorance about what such hateful rhetoric can do. Just eight days after Trump’s inauguration, Alexendre Bissonette, a 28-year-old university student and former RCA cadet, walked up to a Quebec City mosque and shot at the 53 people gathered inside, killing six and injuring 19 more. He was motivated by the same ideology partly buoying Trump’s popularity, and obsessively checked Trump’s Twitter feed in the month leading up to the attack. The connection between ideology and action wasn’t acknowledged in the case of Bissonnette—he was cast as lone wolf rather than a disciple of the type of white nationalism Trump peddles. My fears were clearly not abstract, and yet, I felt I had to keep writing the same column explaining them, over and over again.

So what did we see over those four years? An aggressive agenda aimed to “take America back.” Rolling back LGBTQ+ rights, including in schools and in the military. An immediate “Muslim ban,” deportation raids targeting Latine communities, the separation of at least 2,500 children from their families at the southern border, a disgusting show of force against peaceful Black Lives Matter protests against police violence, stacking the Supreme Court with another conservative judge a week before the election. And let’s not forget the revolving door of terrifying people ranging from unapologetic racists to straight-up white supremacists that helped enact these policies: Michael Flynn, Steve Bannon, and Stephen Miller, to name a few.

In 2016, sympathetic explanations for Trump supporters flooded in: vague statements about “middle America,” the unemployed and those who felt left behind. And yet, over 74 million voted for him again in 2020 knowing exactly the damage he did. He kept serving up a toxic cocktail of nationalism to his supporters and solidifying support while softening the edges of his pathological lies, attempts to undermine nearly every democratic institution in the country, shady business dealings, and his staggeringly inept response to a pandemic that has taken the lives of more than 373,000 Americans.

Biden’s narrow win came as a relief for many—a feeling America can get back to “normal.” It reminded me of how I felt four years ago at the Women’s March, the day after attending Trump’s inauguration. Standing shoulder-to-shoulder with women (and men!) packed so tightly for the first few hours we could barely move was a sign that Trump didn’t represent the entire country; that people cared enough to fly, drive, bus in from every corner of the country to make that clear. The gathering was a salve for liberals left raw after Trump’s inauguration.

What the Women’s March represented to American liberals is exactly what the Save America March is for Trump supporters—a show of strength. And while many will characterize those who rioted a small minority, these were just the people with the means and motivation (during a pandemic, no less) to board buses and arrive in Washington in response to Trump’s call to “stop the steal.”

Trump isn’t solely responsible for this. Many Republicans shamefully supported this increasingly fascist behaviour because Trump’s march towards consolidating power stood to benefit them. It wasn’t until his supporters came for their house—the physical halls of power they felt so safely ensconced in—that some of these Republicans came to understand the consequences of aiding and abetting the derailing of democracy .

Two weeks before a wannabe dictator will be ousted from power is four years too late to find your principles. In the meanwhile, Trump’s base of support has fortified. His supporters will pose ongoing danger. Seventy-four million are not a misguided minority—they’re a movement.