20 million people are on the brink of starvation. Here's how you can help

The famine striking four countries in Africa is the largest humanitarian crisis 'since the creation of the United Nations.' 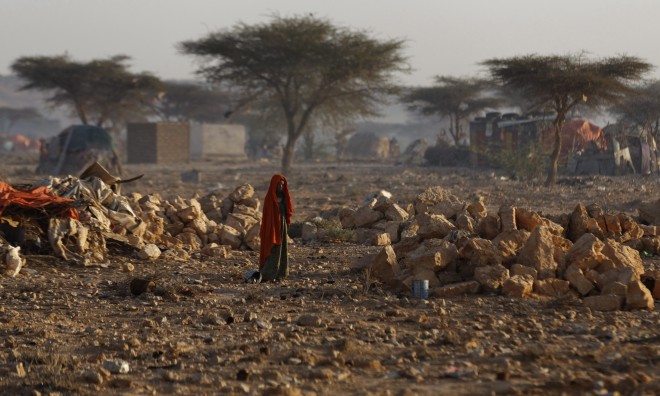 A Somali woman walks through a camp of people displaced from their by drought in Qardho, Somalia last month. Photo, Ben Curtis/AP.

The United Nations has declared that 20 million people in four countries are facing starvation — and it’s largely a man-made problem.

“Nobody should be dying of starvation in 2017. There is enough food in the world,” UN Assistant Secretary General Justin Forsyth said to the BBC.

While it’s hard to imagine the scope of the crisis that South Sudan, Somalia, Yemen and northern Nigeria are facing, Stephen O’Brien, UN under secretary-general for humanitarian affairs, has characterized it as the “largest humanitarian crisis since the creation of the United Nations.”

The last time the world saw a famine was in 2011 in Somalia and by the time it was formally recognized, more than 100,000 lives had already been lost (the famine led to the death of 260,000 people in total). A famine is officially declared when 20 percent of the population doesn’t have enough food, more than 30 percent of children under five are suffering from acute malnutrition, (inadequate nutrition leading to rapid weight loss/inability to gain weight) and when the death rate rises to two out of 10,000 every day. While labelling a crisis a famine doesn’t elicit a particular emergency response, it’s meant to be a clear indicator to the public that a crisis is underway.

Chatelaine spoke with Julie Marshall, the Canadian representative of the World Food Program (WFP), one of the key UN agencies working to alleviate the crises, about who is most vulnerable, what is being done and how you can help.

The situation in each country

So far, South Sudan is the only country where there are official pockets of famine, which were declared in February. The young nation has faced continued conflict since it was created in 2011 after breaking off from Sudan following a long and brutal civil war. This has led to the internal displacement of nearly two million people, the recruitment of 16,000 child soldiers and rocketing food prices. Because of ongoing fighting, aid agencies don’t have access to some of the areas with vulnerable populations. Nearly five million people in South Sudan required urgent food assistance from February to April, according to the WFP. 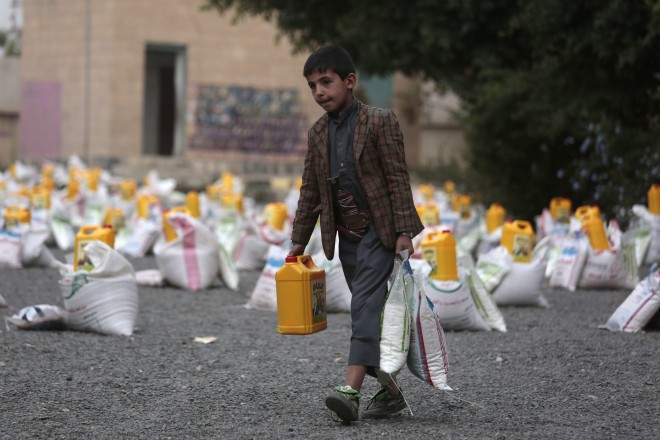 Yemen, one of the poorest Arab nations, is the largest crisis in terms of the number of people impacted — 17 million people, or 60 percent of the population, are hungry. More than two million children are acutely malnourished, while 460,000 are severely and acutely malnourished, putting them at 10 times higher risk of death compared to healthy children. This is also a man-made famine, the result of a two-year conflict between the government and Houthi rebels, largely seen as a power struggle between Saudi Arabia, which intervened in 2015 by bombing Yemen to support the Sunni government, and Iran, which has long been thought to support the Shia rebels. 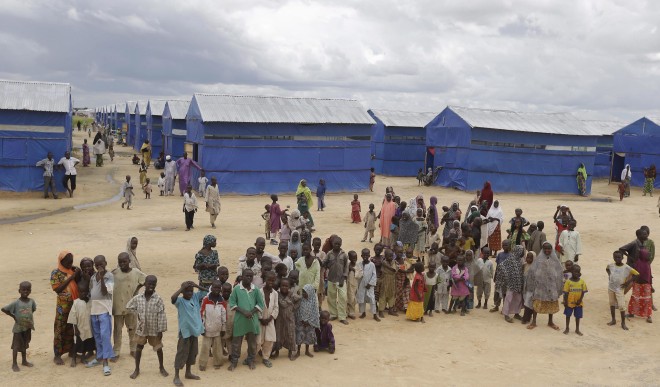 In northern Nigeria, Marshall says famine may already be happening but collecting data to prove this has been difficult. The crisis there is fuelled by conflict, not nature, as the government fights militant group Boko Haram, which has been active for seven years, causing 20,000 deaths. In villages Boko Haram seizes, farmers are forced to abandon their crops while military restrictions and safety concerns have barred access to aid agencies in many areas. Currently, 4.7 million are going hungry in three states and that number is expected to grow to 5.1 million.

Who are most vulnerable?

Children, especially those under five, are the focus of humanitarian efforts since this is a key time for their development — malnourishment could lead to permanent physical and developmental disabilities. 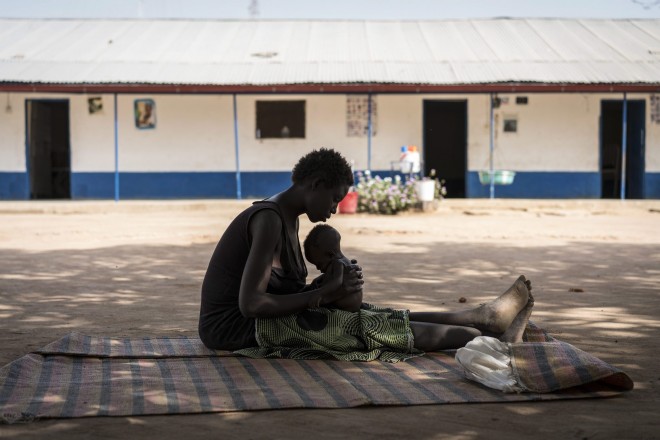 As food or money dwindles, people start to eat less, and they start to eat less nutritious food. Eventually mothers stop eating so their children can eat, says Marshall. Immune systems weaken, particularly among children, the elderly, and pregnant and breastfeeding women. Conditions that were previously easily curable, such as pneumonia, tuberculosis or diarrhea, become much harder to manage, especially since health care is largely unavailable in these crisis zones. “Something like diarrhea can kill a child,” says Marshall.

What needs to be done?

In February, UN Secretary-General Antonio Guterres said $4.4 billion was needed to alleviate the crises. As of April 3, $925 million, or 21 percent of the total ask, has been raised, according to Russell Geekie, a spokesperson for the UN Office for the Coordination of Humanitarian Affairs.

The WFP’s Marshall says the international community must put pressure on parties to these conflicts to provide safe access to aid workers. In South Sudan, six aid workers were recently killed, bringing the total number of aid workers who have been killed since the conflict started in 2013 to 79. 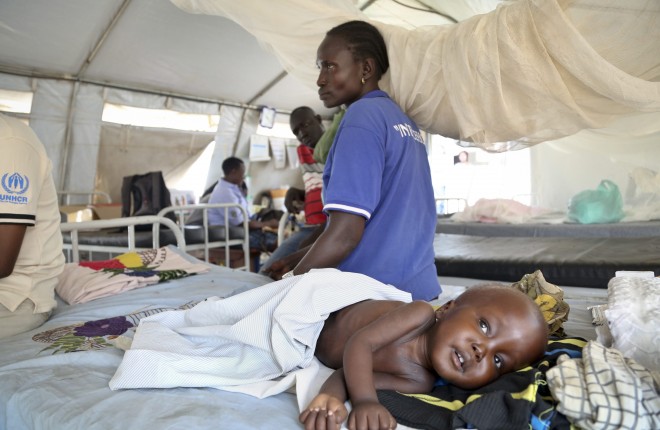 In this photo taken March 15, 2017, two-year-old South Sudanese refugee Simon is accompanied by his grandmother as he is treated for malnutrition in Bidi Bidi camp, northern Uganda.  Photo, Justin Lynch/AP.

What help is being provided?

Assistance is being provided by the WFP in two ways: food drops and cash/vouchers. Getting cash or vouchers into areas where food is available for purchase is cheaper than transporting food into a region, says Marshall, and has the added effect of injecting cash into an economy.

What has Canada done to help?

Canada responded to the UN’s request for help by promising $119 million for humanitarian assistance to 10 NGOs, the Red Cross and 10 UN Agencies, with the largest amount, $42 million, going to the WFP.

“We are encouraging Canadians to donate to the main, trusted international organizations [like] the UN or Red Cross or Oxfam,” she says. “In these very dangerous environments I would not recommend [donating to] small organizations because this represents important risks for humanitarian workers.”

The government currently doesn’t have plans to offer dollar-for-dollar matching of private donations as it did after the massive floods in Pakistan in 2010 and the Sahel humanitarian crisis in 2012. In the month after the 2010 earthquake in Haiti, the government pledged to match funds donated by Canadians, which totalled $220 million. 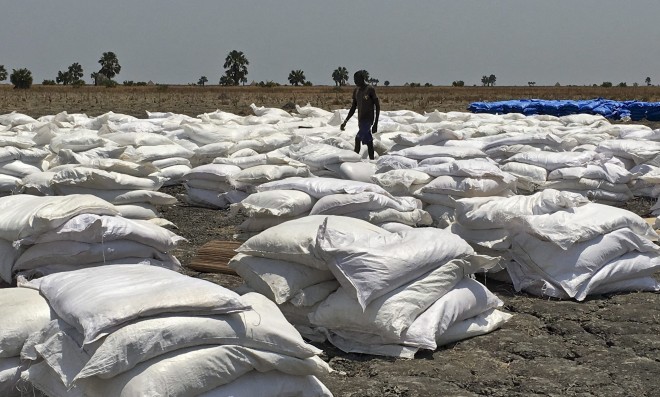 In this photo taken  March 1, 2017, bags of food dropped by air from a World Food Program plane are sorted in Padeah, South Sudan. Photo, Sam Mednick/AP.

What you can do to help

Although many think donating food is the way to alleviate a famine, Marshall says when it comes to the WFP, donating money is the best thing you can do.

“Where possible we purchase our foods from the counties experiencing the crisis or in the region, so even purchasing the products we’re helping people in need,” she says, adding that the cost of shipping food is incredibly expensive, in some cases more than purchasing the food in the region.