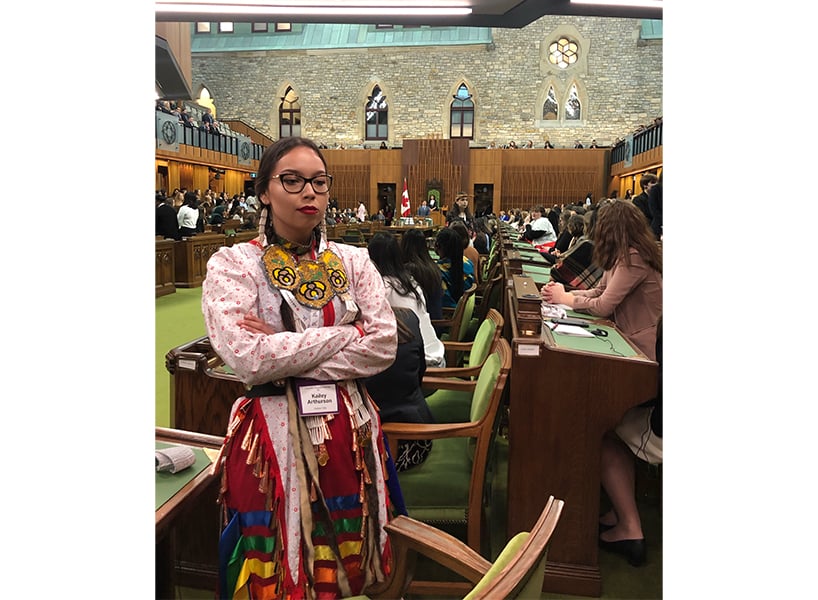 Kailey Arthurson stands with her back turned while Prime Minister Justin Trudeau addresses the Daughters of the Vote delegates.

Standing with her back to Prime Minister Justin Trudeau, Kailey Arthurson stood out against the wooden furniture and bottle-green upholstery of Canada’s House of Commons. A young, Indigenous woman wearing a traditional jingle dress and, oh yes, also breastfeeding her baby daughter, Arthurson didn’t look like the room’s usual occupants. (Yes, Canada elected its most diverse Parliament in 2015, with 47 visible minorities and 10 Indigenous MPs—but that’s still only a tiny fraction of the House’s 338 seats.)

And that was kind of the point.

Arthurson was in Ottawa for Daughters of the Vote, a program that selects delegates from each federal riding to represent their community and vision. Each delegate sits in for their riding’s MP in the House of Commons and at question period, and also gets a chance to attend leadership and policy workshops and other networking events. This year, the biannual event intended to inspire more women to get involved in political leadership took place the day after Trudeau ejected Jody Wilson-Raybould and Jane Philpott from the Liberal caucus because of what he called “broken trust” between the two MPs and the rest of the party.

Arthurson, who represented Manitoba’s Churchill-Keewatinook Aski riding, originally flew to Ottawa intending to improve her leadership skills and grow her networks, but after seeing the news about Wilson-Raybould and Philpott she was compelled to take a stand. She was one of multiple delegates who walked out of the House of Commons during the speech from Progressive Conservative leader Andrew Scheer, and later on, she stood and turned her back during Trudeau’s address.

The night before Daughters of the Vote, Arthurson and other Indigenous delegates had set up a safe space where they could smudge and participate in a sharing circle because they were upset about Wilson-Raybould and Philpott’s ejection. The removal of the two politicians had elicited heated responses, particularly from multiple First Nations leaders, some of whom said watching the SNC-Lavalin investigation unfold has raised questions about whether or not politics is a safe place for Indigenous women. For Arthurson and some of her fellow Daughters of the Vote delegates, it prompted discussions about what they would do if Trudeau addressed them in the House. They sent a tweet in front of Parliament Hill, stating their solidarity with the two MPs—and planned to make an even more public stand the following day.

And while some critics online argued that the protests weren’t professional, or that the actions flouted the opportunity the women were given—for many of the delegates, this is exactly what democracy and leadership is about.

Arthurson was one of the few delegates who was chosen to speak in the House of Commons, and took the opportunity to raise issues of systemic racism, environmental justice and issues she’s seen with Indigenous people in her community, Winnipeg and surrounding areas. Specifically, she advocated for Bill C-262, which would require the government of Canada to ensure that Canadian laws harmonize with the U.N. Declaration of Rights of Indigenous Peoples.

“I stand with the women who are excluded and forcibly removed from colonial spaces,” said Arthurson, who spoke with her 21-month-old daughter in tow.

Reflecting on the day, Arthurson, who is currently a student at University College of the North, says she was anxious about her speech, and about leading the Indigenous delegates into the House of Commons when they drummed in—but she was confident about taking a stand against certain federal leaders.

“I felt from the remarks that I heard about Scheer that he didn’t deserve for us to be in the room, hearing what he had to say,” says Arthurson, explaining that she generally does not agree with the PC leader’s viewpoints and feels that the party threatens the livelihood of BIPOC. But for Trudeau, Arthurson says many of the Indigenous delegates wanted to make a different statement, while also remaining present.

As soon as the Prime Minister began speaking, Arthurson and an estimated 50 other women rose and turned their backs on Trudeau. “I didn’t even look at him, I just stood up and turned away,” she says.

For Arthurson, the protest was her way of supporting Wilson-Raybould. She wanted Trudeau to “realize when he shoots down one Indigenous woman, he can’t shoot us all down. We all wanted to make a statement together.” And Arthurson was pleasantly surprised by the support the protest received from the non-Indigenous delegates in attendance.

Nursing student Asmaa Ali, the delegate from Edmonton Griesbach, did not physically stand with the other women during Trudeau’s speech, but says she supports their message. “For them to be standing up in their cultural dress and turning their back to the head of state is something that is so impactful,” she says. (Ali did join the walk-out during Scheer’s speech.)

I stand in full and whole solidarity with the indigenous women and all women who stood up and turned their backs on the Prime Minister as a stance to make their voices heard. Honestly, this was strength and courage defined #Equalvoice #DaughtersoftheVote pic.twitter.com/CzEzuzGqtj

This is not the first time the Daughters of the Vote has been a protest ground for young women. In 2017, Arezoo Najibzadeh gave up her seat to raise awareness about women who leave politics because of sexual violence. Najibzadeh says this activism isn’t necessarily about Daughters of the Vote as much as it is about having a healthy democracy. “Anytime you bring a group of people together, you have to be mindful of the fact that we’re all coming in with different experiences and from different paths of life,” she says, highlighting Daughters of the Vote’s ability to bring together women from many marginalized communities. She feels that those who criticize the protests forget that not all of the delegates come from the same backgrounds.

“They can’t take the politics of our lives out when we enter these spaces,” says Najibzadeh.

Following this year’s Daughters of the Vote’s sitting in the House of Commons, Trudeau was asked about the protests that took place.

“One of the things that is strong about our society and about our country is that there’s a range of diverse voices and we need to make sure that those voices are being heard, or are able to choose to not speak or not hear,” Trudeau told reporters. “This opportunity that the Daughters of the Vote had to express themselves, to highlight their concerns, is really important.”

Participating in and witnessing the protests during Daughters of the Vote, as well as the fact that their actions quickly trended on Twitter and made headline news, showed Ali the power that she and the other delegates hold. “I realized that our actions and our voices and our impact are stronger than we think and we don’t give ourselves enough credit for how big of an impact we can make as young women,” she says.

Arthurson walked away from the day with a similar feeling of being both empowered and overwhelmed. She hopes one day, her daughter will be able to take part in opportunities like Daughters of the Vote—but also that she’ll see, “that I had the courage to [stand] that day, and that she was actually there to be part of it.”