In short: there's never been a more crucial time to take action. 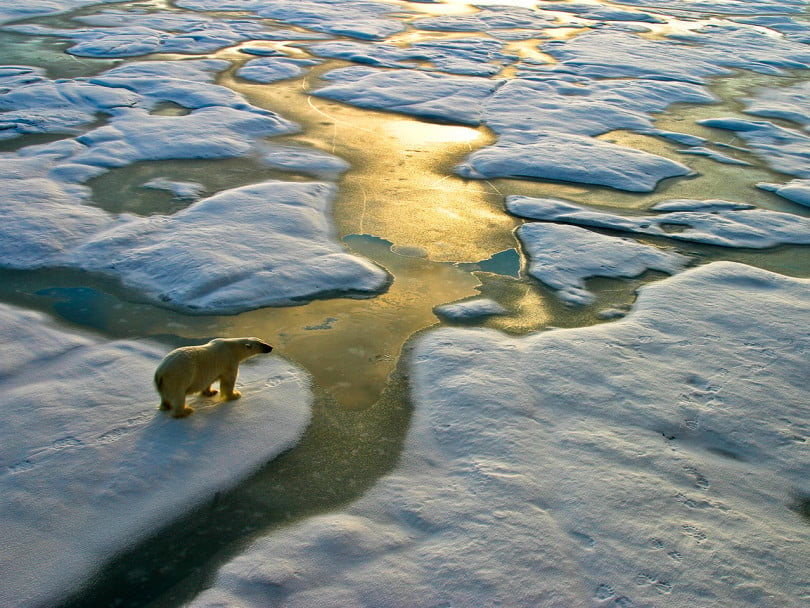 Usually, when scientists talk about the front lines of climate change, it calls to mind small island nations at risk of being flooded by rising sea levels. But when Environment and Climate Change Canada released Canada’s Changing Climate Report (CCCR) on April 1, it emphasized that Canada’s North has started melting. In other words, climate change has hit home.

It’s the first report from an initiative that Natural Resources Canada began in 2017 to assess how climate change is impacting the country—and what we should do next. The CCCR will lay the basis for future reports that will provide suggestions to mitigate the worst effects of climate change moving forward.

Unfortunately, it’s projected that Canada overall will warm at almost twice the global average regardless of what we do to fight it. (Oh, and Northern Canada has already warmed at three times the global rate.) On the brighter side, there are still ways to reduce future global warming. Here’s what you need to know.

Does the report contain new research?

Not really—it draws together all the recent existing peer-reviewed scientific literature from climate scientists on climate change, and synthesizes it into a more streamlined picture of what’s happening. Environment and Climate Change Canada released the CCCR shortly after the federal carbon tax was implemented in four provinces. The more than 40 scientists who worked on the report also present evidence that humans have caused irreparable damage to the climate—primarily through our use of fossil fuels—to the point that the earth will continue to warm to some degree even if we stop all emissions now.

Through eight chapters, the authors look at seven types of potential changes to watch for as climate change deepens: changes in temperature, rainfall and snowfall, climate extremes, snow and ice, freshwater availability, the makeup of the ocean (it’s getting more acidic, for example) and rising sea levels. For each, the report examines two scenarios, depending on what action we take now. The first, mostly aligned with the Paris agreements on emissions cuts (a low-emission best case) and one where we continue on business as usual (a high-emission worst case).

“I think one of the key things we highlight in this report is that our future is uncertain and how much warming Canada will see is strongly dependent on how much we emit globally in terms of greenhouse gases,” explains Megan Kirchmeier-Young, a research scientist at Environment and Climate Change Canada and one of the authors of the report.

So, why is Canada warming faster than the rest of the world?

After this past winter, it might not feel like Canada is getting any warmer. However, the stats point to increasing temperatures, especially during the winter months. In Northern Canada, temperatures have risen by 2.3°C annually since 1948 and Canada’s annual average has gone up by around 1.7°C. That may not sound like a lot, but on a mean climate scale (versus daily temperature changes), it’s pretty dramatic.

There are two main reasons for Canada’s rapid warming. Warming has been strongest over land masses versus over large bodies water, and, well, Canada has a lot of land. Second, warming is consistent across the Arctic—and the Canadian Arctic is no exception. These temperature increases are caused by both historical and current carbon emissions that have created the greenhouse gas (GHG) effect warming our earth. And that warming is melting Canadian permafrost and sea ice. It’s a concerning feedback loop, because having less ice to reflect heat from the sun leads to the ground absorbing more of that warming heat.

I've received a lot of questions today about the new report finding Canada is warming at roughly twice the rate of the rest of the world. https://t.co/gBvCmU0klI

Here's why (a short thread) pic.twitter.com/AFbzsLlY9B

To sum it up, Canada has more land and a larger cryosphere (parts of the earth where water is frozen) in comparison to other countries, and as a result, global warming is hitting our average temperatures hard.

I get that the climate is changing, but how will it affect me?

While we’re moving towards shorter winters, the report says “extreme warm temperatures have become hotter” and those extreme temperatures will become more severe and frequent. In the best-case scenario, weather highs that used to occur every 20 years will become “a once in five-year event” by the middle of the century, or a “once in two-year event” in the worst-case scenario. In addition to droughts, frequent heat extremes could also lead to soil moisture deficits across the southern Prairies and interior British Columbia—which could make it difficult to grow crops without more intense irrigation. And although warmer weather means the growing season will increase, so will the risk of wildfires.

Freshwater, which isn’t talked about enough—possibly because Canada is relatively rich in drinkable water—will likely become a rarer commodity in the summer, with warmer weather causing increased evaporation. Warmer winters will also lead to earlier snowmelt, which will leave smaller summer flows. Put that together with higher risks of summer drought and wildfires, and we have a problem.

An increase in melted sea ice will cause several major issues in the ocean, a critical carbon sink (a natural system which absorbs carbon) for the earth. A rise in surface-level freshwater leads to a more stratified ocean (layers form when there are differences in properties like salinity, temperature, oxygenation, and density) and that makes it harder for the water to mix and take in more carbon from the atmosphere. More melting ice also adds to rising sea levels. Changing sea levels and fewer ice barriers will allow for longer wave seasons, bigger waves and more shoreline erosion. Furthermore, the ocean is warming because it has absorbed “90 percent of the increase in heat energy” from 1971 to 2010.

How do we know these changes are our fault?

Yes, there are natural phenomena like El Niño and La Niña that affect temperatures or precipitation during specific years, but it’s not enough to account for the rising extreme precipitation, decline in snow accumulation, or melting sea ice and permafrost—nor are the changes consistent enough to be caused primarily by natural causes.

The top GHG culprit is carbon dioxide from burning fossil fuels, which dates back to the Industrial Revolution of the 1800s. Carbon dioxide stays in the atmosphere for a century or so at a time, so we’re facing irreversible changes thanks to cumulative GHG.

“The warming we see is effectively irreversible on human accounts. Even if we turned off all of our emissions globally right away, we would still see some additional warming. However, the amount of warming we will see in the future is very strongly dependent on how much we emit globally in terms of CO2,” says Kirchmeier-Young. “It is a problem that individuals can contribute to, that globally we need to deal with, but however much we can reduce our emissions is warming that we can avoid.”

There are really two options left for us now. In the most optimistic scenario, we can double down on reducing carbon emissions and adapting infrastructure to withstand the worst effects of climate change (for example, making sure structures are fire-, flood-, and erosion-resistant).

Jessie Ma, an Independent Electricity System Operator research fellow at Ryerson University’s Centre for Urban Energy, says to mitigate carbon emissions, we need “to accelerate the process of innovation so we can have new technologies that cost less and perform better. Those technologies should also emit less carbon.” Future reports from the National Assessment of Canada in a Changing Climate will look at the impacts of climate change and adaptation.

Whether it’s a carbon tax or asking politicians to create more incentives for innovations or some other solution, the CCCR is the culmination of what scientists have been telling us for ages. And it’s never been more important to act on their findings.