Naomi Klein, Sarah Polley and others have taken up the cause of mail carriers fighting to fix a serious pay equity problem. 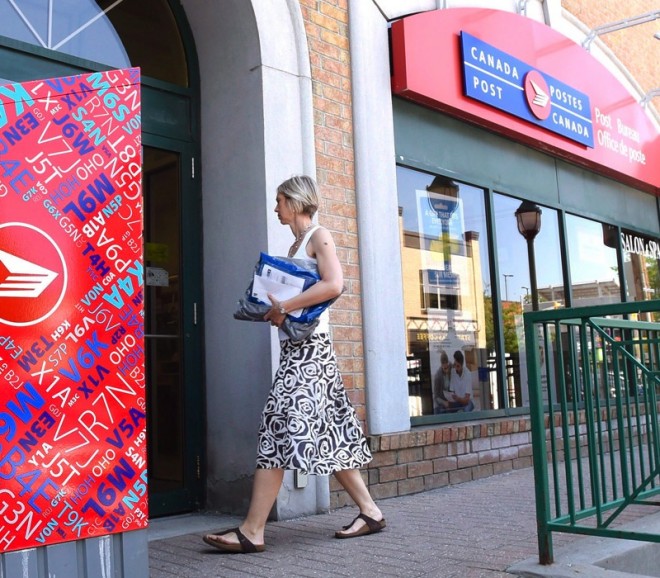 “It is 2016 and women and men who do virtually the same work should earn the same wages and enjoy the same benefits,” reads the letter signed by actor and director Sarah Polley, author Naomi Klein and social activists Maude Barlow and Judy Rebick. “Unfortunately, for a large group of women workers at Canada Post, this is simply not the case.”

There is no word yet on whether pay equity concerns were directly addressed when the two parties came to their tentative deal late Tuesday afternoon.

Pension may be the hot-button issue of the ongoing labour dispute between Canada Post and the Canadian Union of Postal Workers (CUPW), but CUPW reps argue that a gender pay gap is also at its heart. “[This is] possibly the worst case of gender discrimination in Canada’s federal public service,” reads a memo from the union representing the nation’s 50,000 mail carriers.

The union has accused Canada Post of breaking federal pay equity legislation, which ensures there is no gender-based wage discrimination amongst public servants, and urged Canadians to write to Justin Trudeau and Patty Hajdu, the Status of Women minister.

Canada’s postal carriers are divided into two sectors: 8,450 rural and suburban carriers (RSMCs), a workforce that’s 70 percent women, and 22,147 urban carriers, made up of 70 percent men. The two divisions do virtually the same work but have different collective agreements, resulting in different pay and benefits.

On average, the mostly female RSMCs earn $21.16 an hour, while their urban, mostly male counterparts make $26.48 per hour — a 28 percent difference. And, unlike the urban carriers, rural-suburban workers don’t receive overtime, plus they pay for their own cars and insurance (urban carriers largely deliver on foot in densely populated areas, while the rural and suburban ones tend to drive due to greater distances between addresses).

“It’s very disappointing because it is 2016 and we work really hard,” says Shelley Sillers, a former RSMC who is now an education and organization officer for the union.  “For me, it’s glaringly obvious we’re doing the same job, but Canada Post has always made it very divisive.” Canada Post couldn’t be reached for comment. 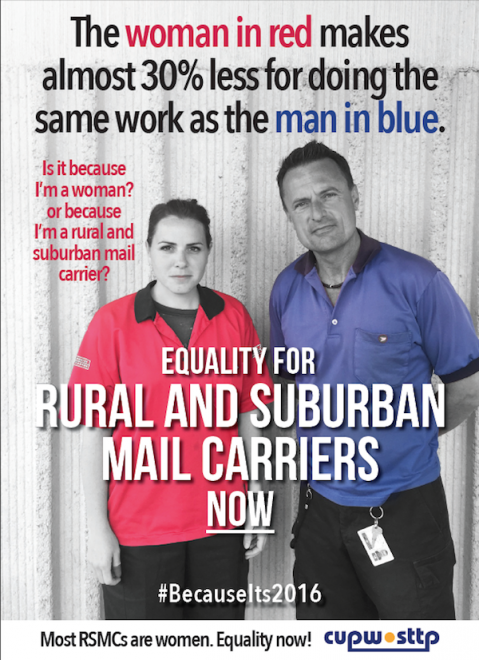 Pay equality has been an issue for RSMCs for decades, and compensation did improve in 2004, when they joined the postal workers union. Employees were granted raises, pensions, coverage under worker’s compensation, paid vacations and employment insurance but, as union rep Geoff Bickerton says, “It’s not quite as good as the [urban] letter carriers.”

Over the last 12 years, RSMCs have banded together to highlight the gender differences. For example, the union recently made ads calling out the fact that RSMCs wear red shirts, while the urban carriers don blue ones — a symbol of the problem, they contend.

In June, Canada Post offered some pay improvements for both urban and RSMCs, include doubling paramedical coverage, plus the chance for annual raises. The proposal also offered carriers an extra 30 cents for every parcel they deliver above and beyond the 135 they’re expected to drop off each week — a potential boon, according to Canada Post spokesman, Jon Hamilton. He told The Globe and Mail that the extra money per package allows RSMCs the opportunity to make even more than their urban colleagues, given that online shopping has sparked a boom in package delivery. Bickerton, for his part, calls this argument “blatantly rubbish.”