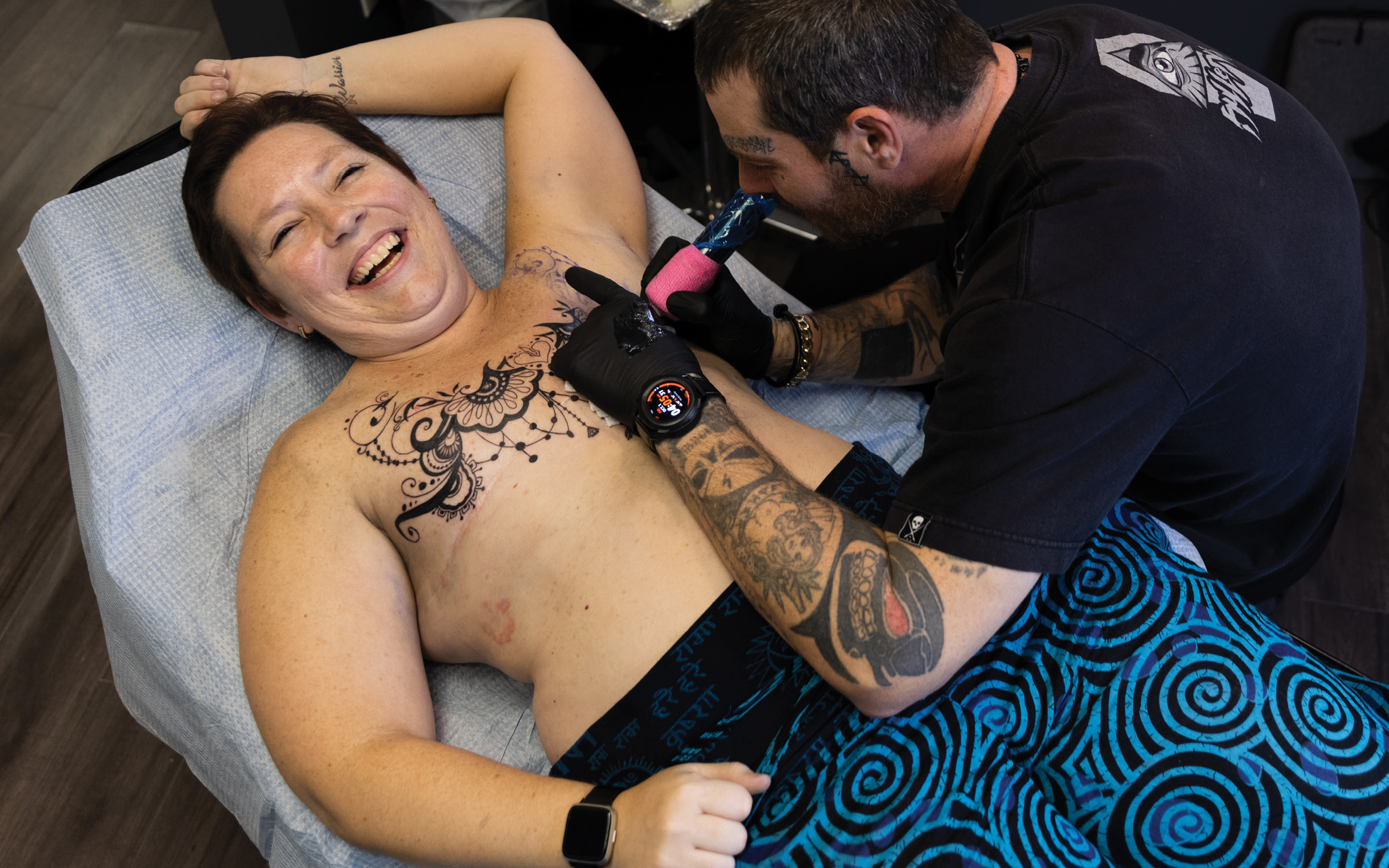 Five Women On The Healing Power Of Mastectomy Tattoos

‘We've been told that beauty is perfection. The tattoos show women that they can tell their stories the way they want.’

This is not your typical breast cancer charity event.

First of all, there isn’t much pink. The tattoo parlor is all monochrome: black leather couches and fluorescent white lights. Tucked behind a Dollarama on the top floor of a COVID-deserted Montreal mall, Uptown Tattoos is an island of noise, champagne corks, crying and classic rock.

Five women will be toughing out several hours of precision needlework today. Dense lines over sensitive scar tissue. It’s a hard-earned catharsis: all of these women have had full or partial mastectomies as part of their fight against breast cancer, and all have chosen not to get tattoos that would imitate real nipples. Their designs are expansive and colourful pieces of art, meant to complement and celebrate the new shape of their bodies. 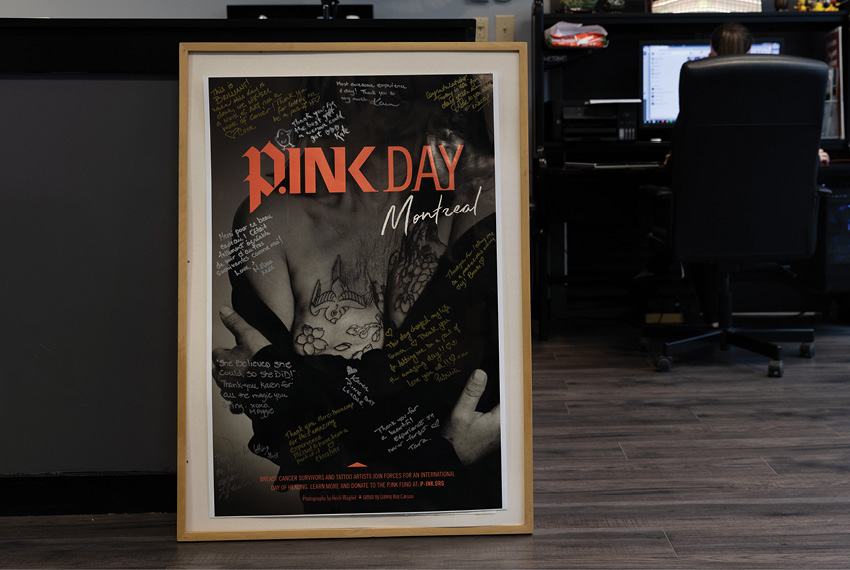 The cost of the tattoos is covered by the charity Personal Ink (P.ink), a program that pairs volunteer tattoo artists across North America with dozens of breast cancer survivors desiring such artwork each year. Of the 17 Canadian women who applied in 2020, eight were selected to participate. Five of this year’s recipients will receive their tattoos together at Uptown, while the rest will have private sessions later this month.

For many women who have had full or partial mastectomies after a breast cancer diagnosis, implants and nipple tattoos or reconstruction are the presumed next steps. Oncologists and plastic surgeons come hand in hand, and other options aren’t generally discussed.

“There’s such a stigma associated with scars, especially breast cancer scars because we can’t show our breasts on social media,” says Karen Malkin-Lazarovitz, the mastermind behind today’s event and founder of the only P.ink chapter in Canada. “How are we supposed to know what a woman post-breast cancer looks like,” she says, “if nobody is letting us post [our photos] online?” 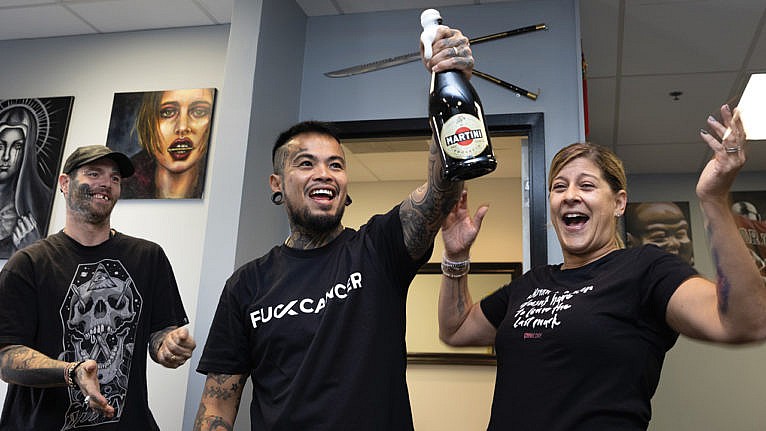 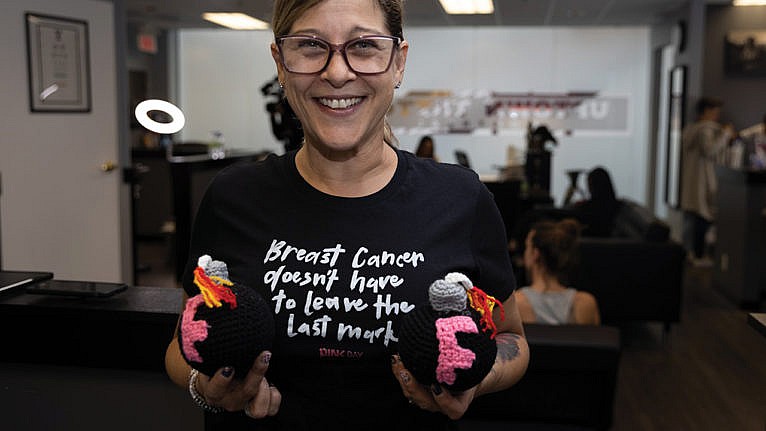 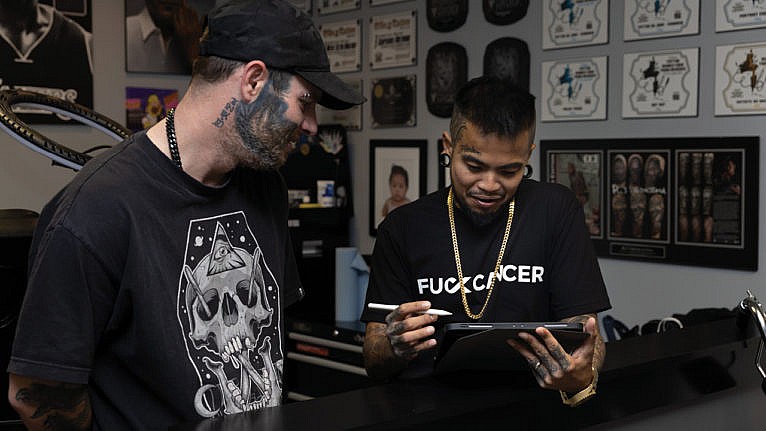 Shane and RJ prepping for their appointments. 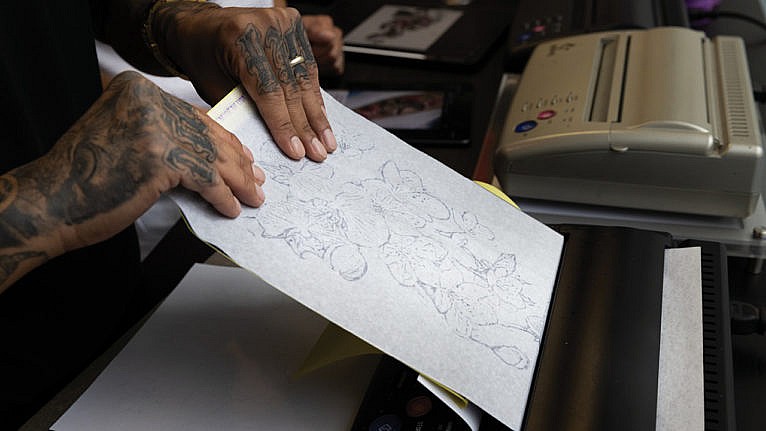 Since her own risk-reducing double mastectomy in 2009, Karen has become an outspoken advocate for more personalized alternatives to reconstruction, which can add multiple surgeries—and compounded risks—to a woman’s already traumatized body. “Doctors were constantly pressuring me to get reconstruction,” she says. Instead, she thinks they should be more open to different body types and preferences, not just the “standard” which equates womanhood with breasts.

All of the tattoos being done today are unique, workshopped in advance in phone calls and long text chains between the artists and the women. A humpback whale; an abstract necklace; a branch of cherry blossoms and orchids; a raven with wings outstretched. The artists, some of whom have been affected by breast cancer in their own lives, are determined to give each woman a piece that suits her needs.

RJ Valencerina, who owns Uptown, will be doing one of the tattoos today. He first met Karen in 2016, shortly after his mother lost a close friend to breast cancer. This personal connection is what inspired him to donate his time to this year’s event. “Everyone who comes in here has a story,” he says.

Shane Blanchard, a tattoo artist from Quebec City, got involved with P.ink Day after his wife passed away from breast cancer in 2019. Today, he bends over his stencil for Erica Hawkshaw, putting in some final touches before she arrives. The piece is intricate and mandalic, hung with diamonds and beads like an ornate piece of jewelry. Next year he plans to host his own event for women in Quebec City. 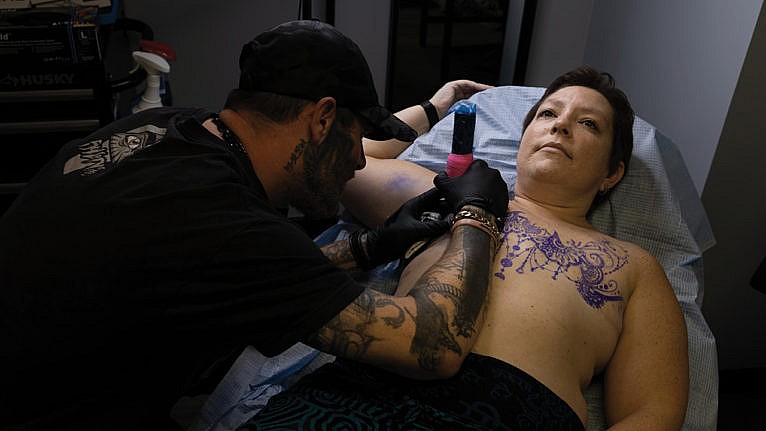 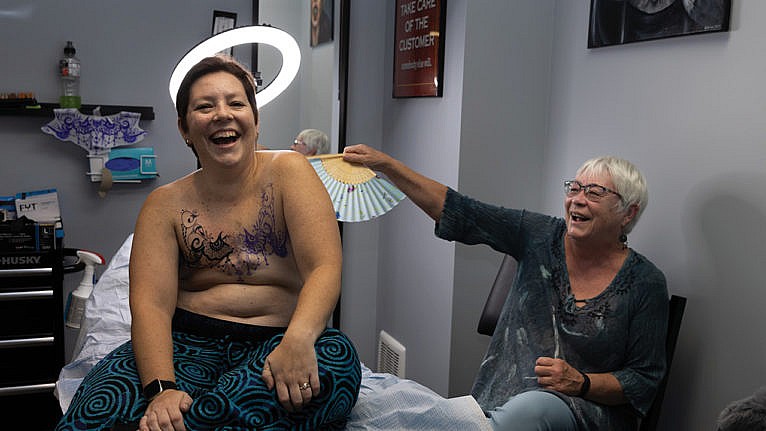 Erica with her mom, Dawn. 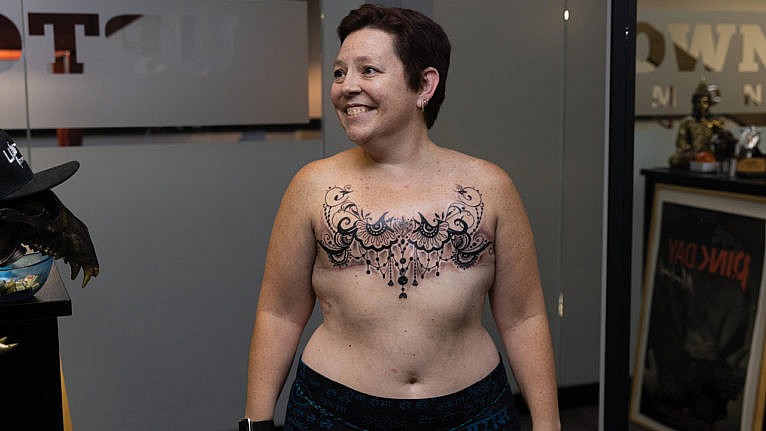 Erica and her mother Dawna are the first ones to arrive, driving in from Peterborough, Ont. They shake out elaborate hand fans and start cracking jokes about menopause, bright and nervous.

Erica’s chest is smooth after a flat closure. (A procedure that removes extra tissue in the breast area and rebuilds the chest wall for a symmetrical, “flat” appearance.) Erica’s decorative tattoo will brighten up a space that she always felt was “missing something.”

“This’ll save me so much on bathing suits,” Erica laughs when she sees Shane’s full-scale rendering for the first time.“I can just buy the bottoms!” 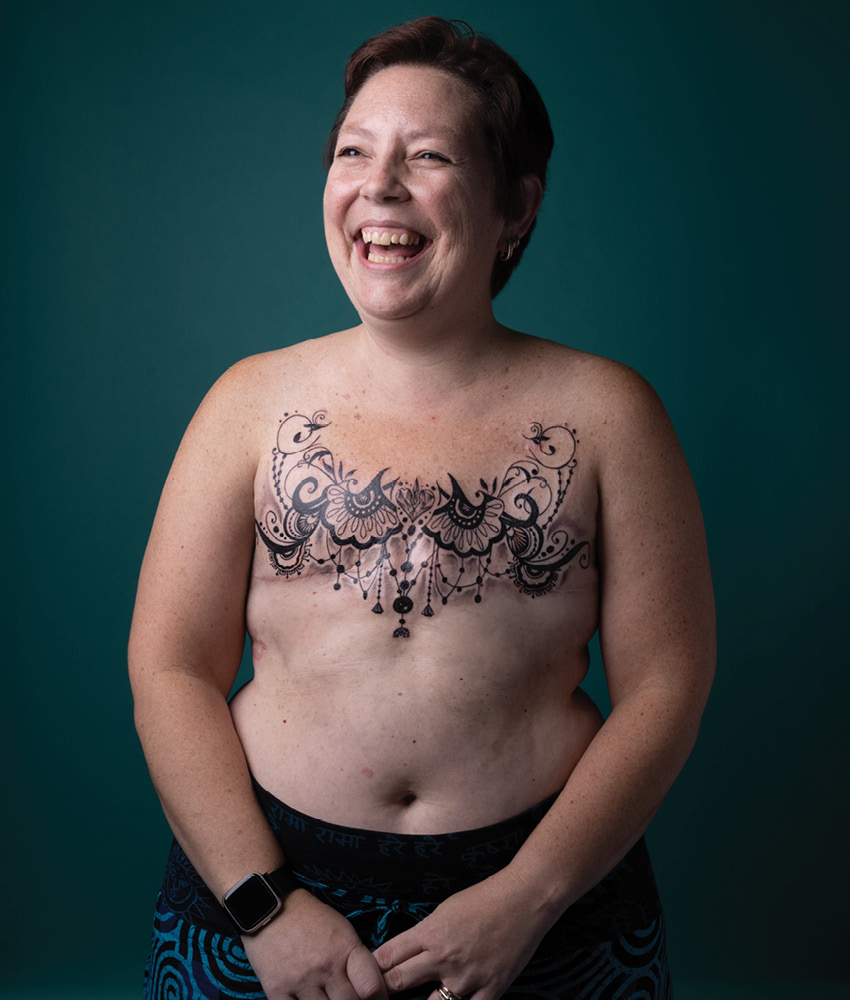 Megan Sewell and Lorraine Snelgrove are the next to enter the studio, the only participants who already know each other. They went to high school together in the late ’80s, and reconnected over Facebook when they were both diagnosed with breast cancer in 2016 and 2017.

Like Erica, Megan has a flat closure, which she wants to cover with a flying raven tattoo. She recalls her surgeon constantly questioning her decision to forgo implants, even as she was being wheeled into the operating room for her mastectomy. 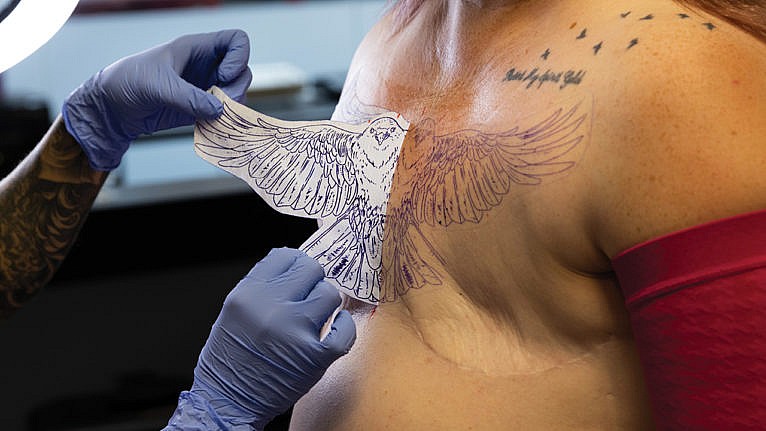 A tattoo stencil is placed on Megan Sewell's chest. 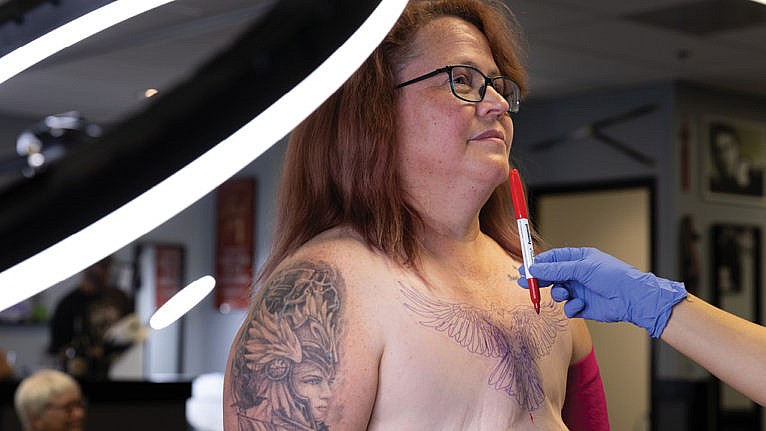 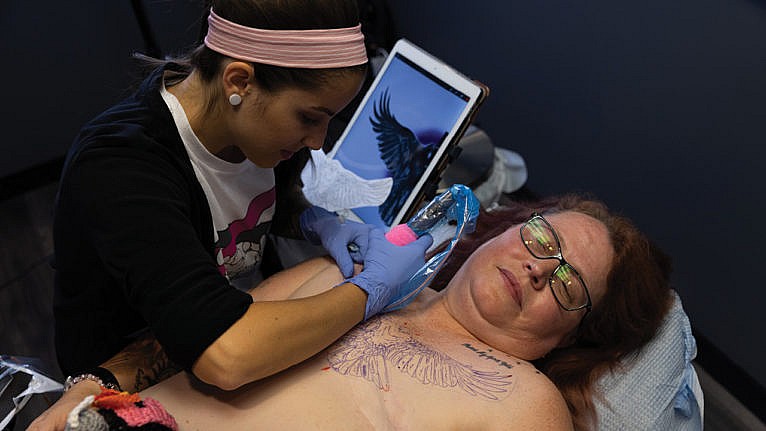 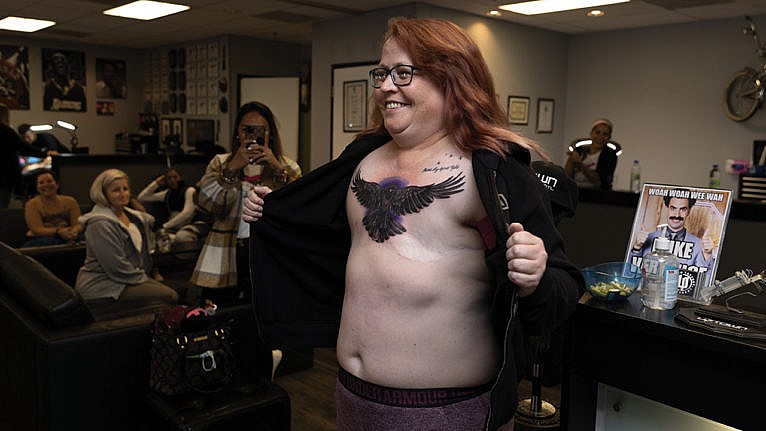 “People seem to think that all women need to have breasts in order to feel whole or to feel feminine,” she says. “I wasn’t one of those people.” The day she walked out of the hospital without her breasts was a good one, full of relief. 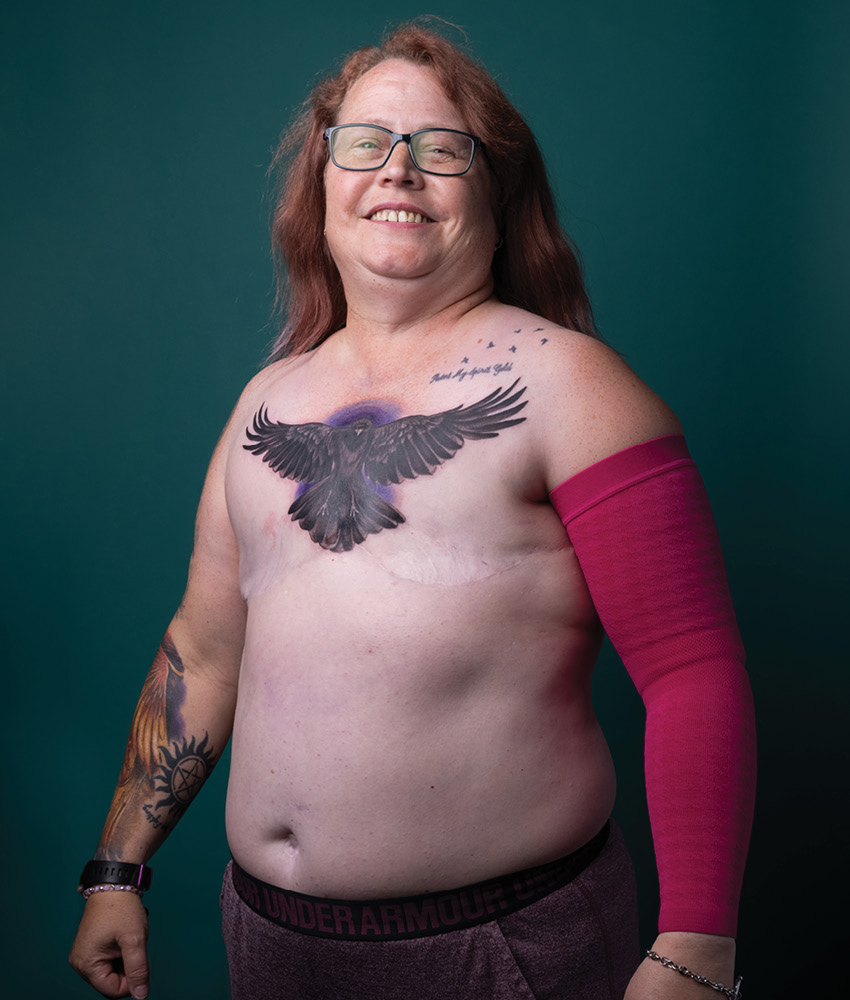 Lorraine felt similar pressure from her medical team. She ended up with reconstructed nipples that turned necrotic and had to be removed—a not uncommon complication.

The resulting scars have been worked into Lorraine’s designs: a humpback whale curving over her left breast, and a shark taking a bite out of the most prominent scar on her right.

“I wanted to look at something on my chest that I put there and that’s a positive,” she says. 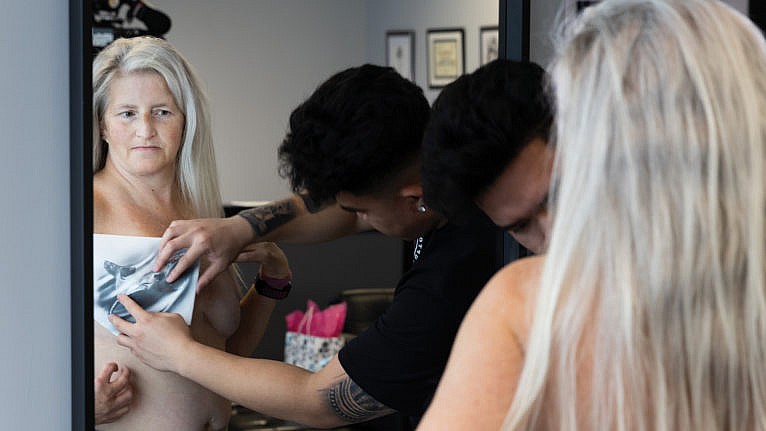 Lorraine Snelgrove prepping for her tattoo. 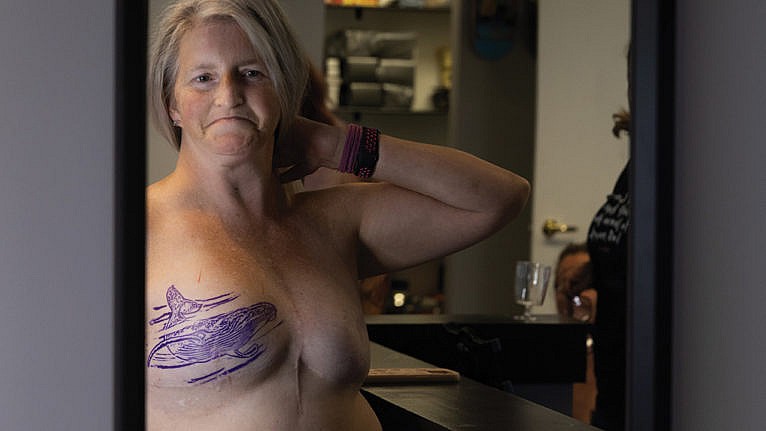 The tattoo stencil is applied. 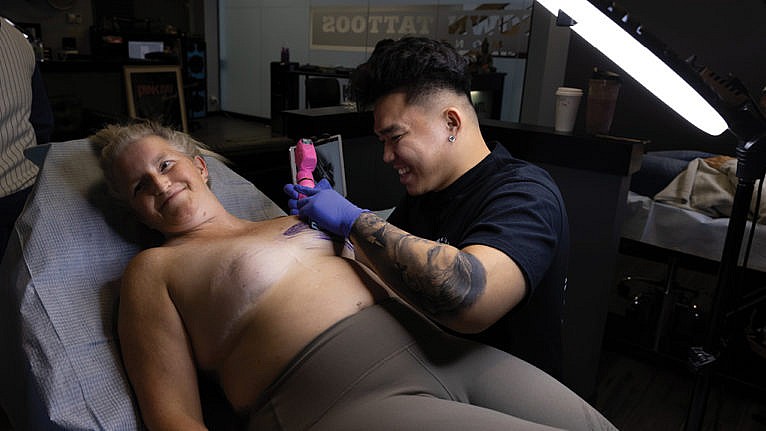 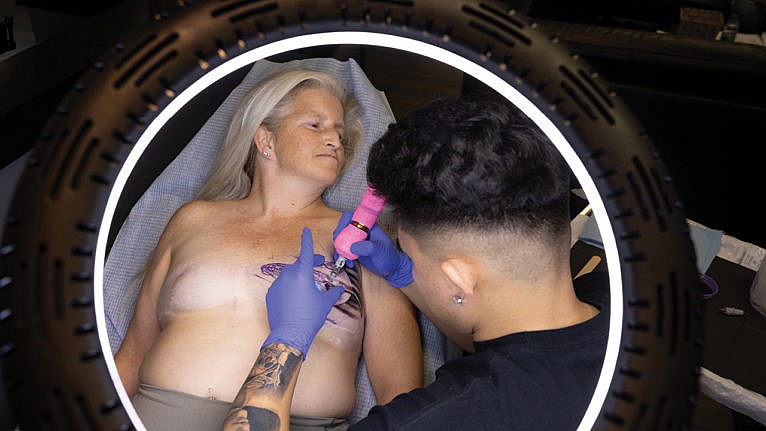 Megan and Lorraine both already have tattoos commemorating their journeys through diagnosis and treatment. A vivid, rising phoenix curls over Megan’s forearm below an ode to Jane Foster of the Marvel Universe, who succumbs to breast cancer after taking up Thor’s hammer to save the world. Lorraine has a tree growing over her lower right side, a tattoo she scheduled after her first biopsy in 2017. The artist who inked it was the first person she told about her diagnosis. 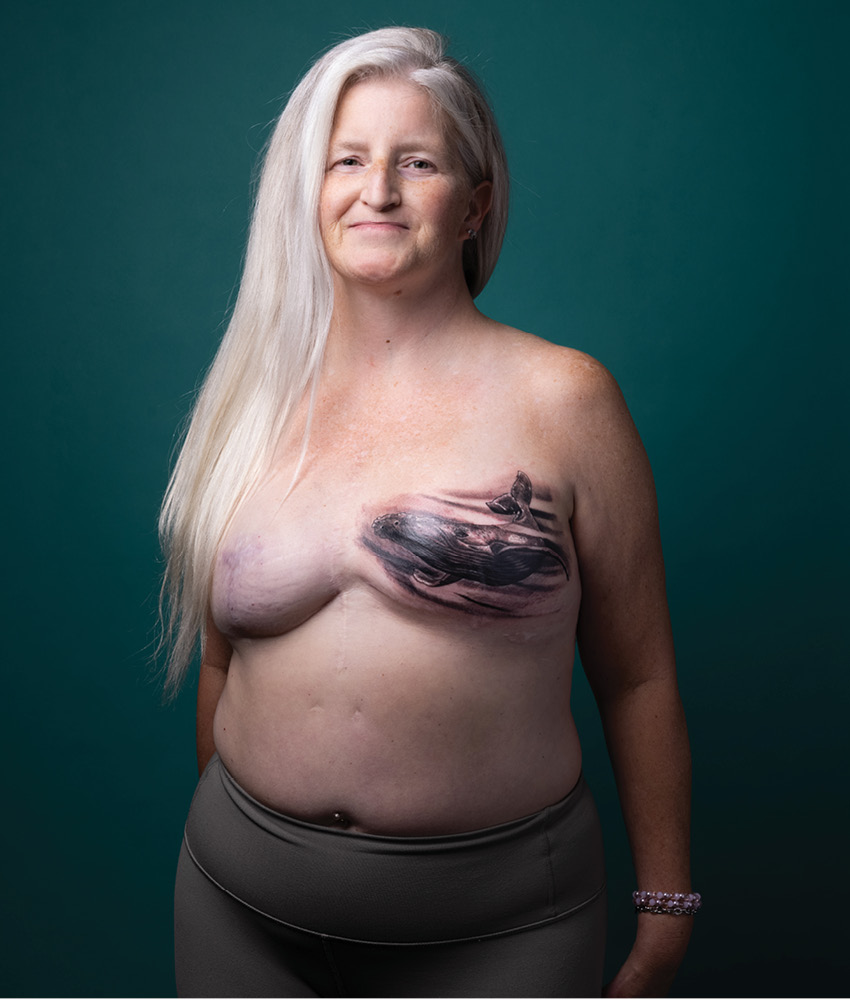 Vanessa Cavasin and her sister Amanda are the last to arrive. They flew in from British Columbia—Amanda taking an unpaid day off from her job as a high school teacher to support her sister. P.ink doesn’t cover its recipients’ travel expenses, but the sisters are close, and ever since Vanessa was diagnosed with breast cancer in 2013, her family has been her rock.

Vanessa knew she wanted to get five cherry blossoms and orchids to represent herself and her four kids, but she hadn’t seen any of RJ’s mock-ups until their plane landed in Montreal. 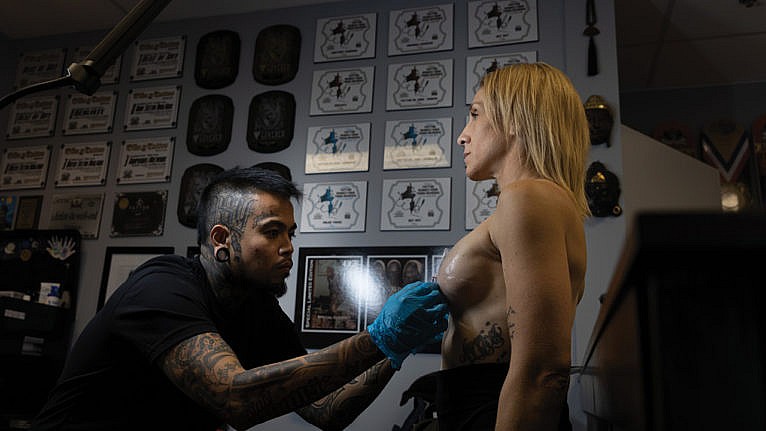 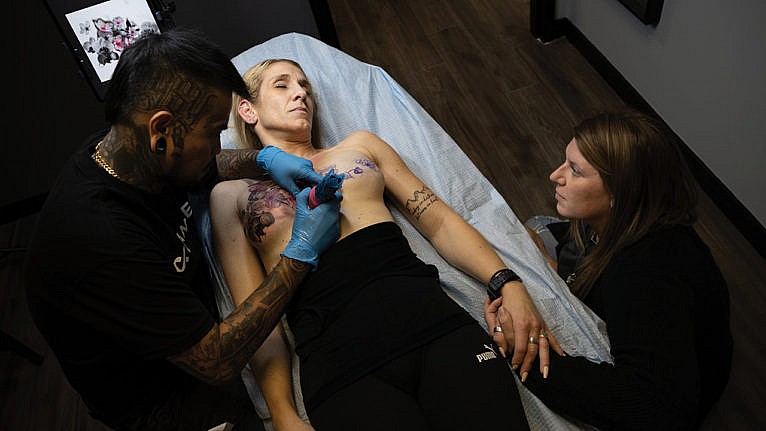 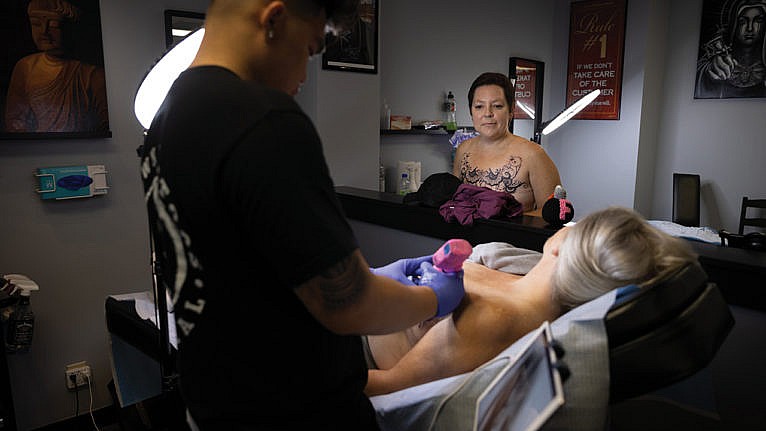 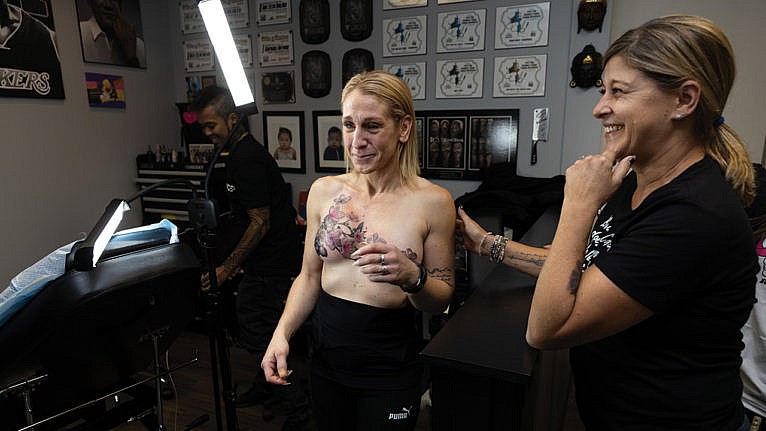 “I turned on my phone and there it was,” she says. She started to cry right there in the terminal. “I was freaking out.” But in a good way. They finalized the design in the early hours of the morning. 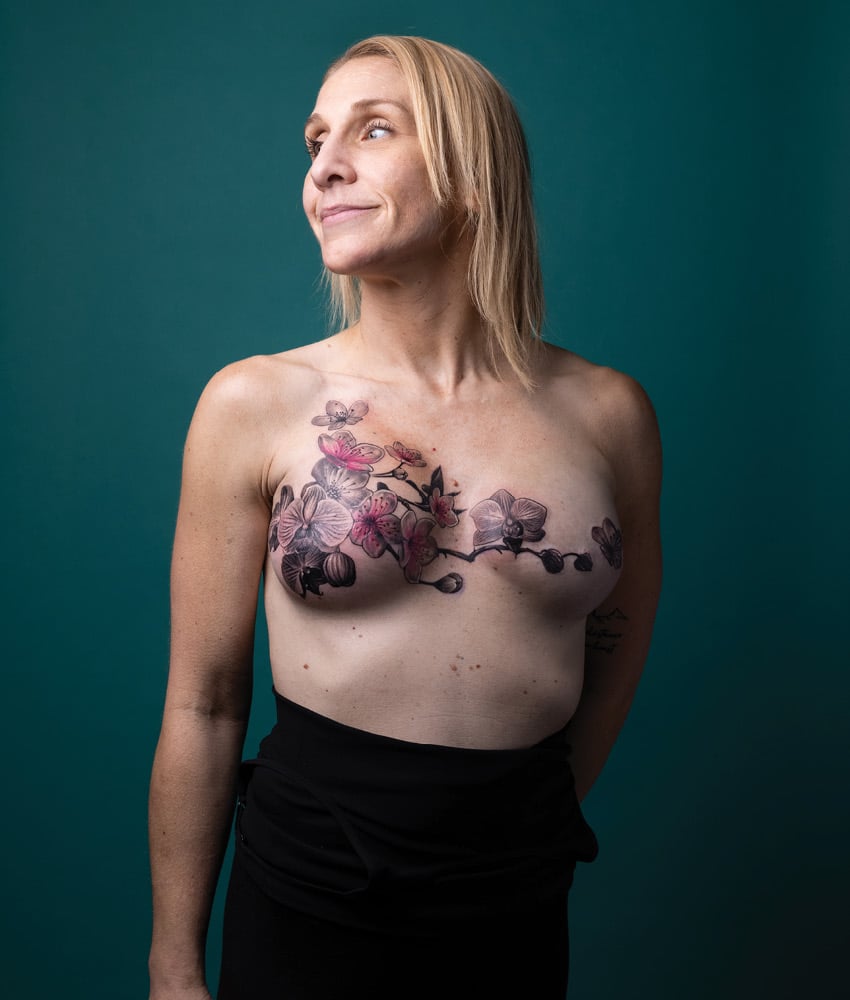 Everyone now accounted for, the women settle in for the long haul. There isn’t much chatting over the quiet rock and constant buzzing of the guns, and by the three-hour mark the music has shifted into something deeper; heavy metal that mirrors the women’s resolve to see this through to the end.

In the lull, Karen lifts up her shirt to showcase her own mastectomy tattoo. A vibrant bouquet of pinks and blues that flow up her left breast and over her shoulder. It’s been photographed a lot since she got it in 2015, even gracing the cover of a magazine.

Karen also got her tattoo as part of a group. One of the women who was part of that group passed away last year, and the three remaining women all got new tattoos in her honour. Each chose a part of their friend’s cherry blossom mastectomy tattoo to replicate. Karen holds out her forearm with reverence: two pink flowers in full bloom, with more buds on the way. 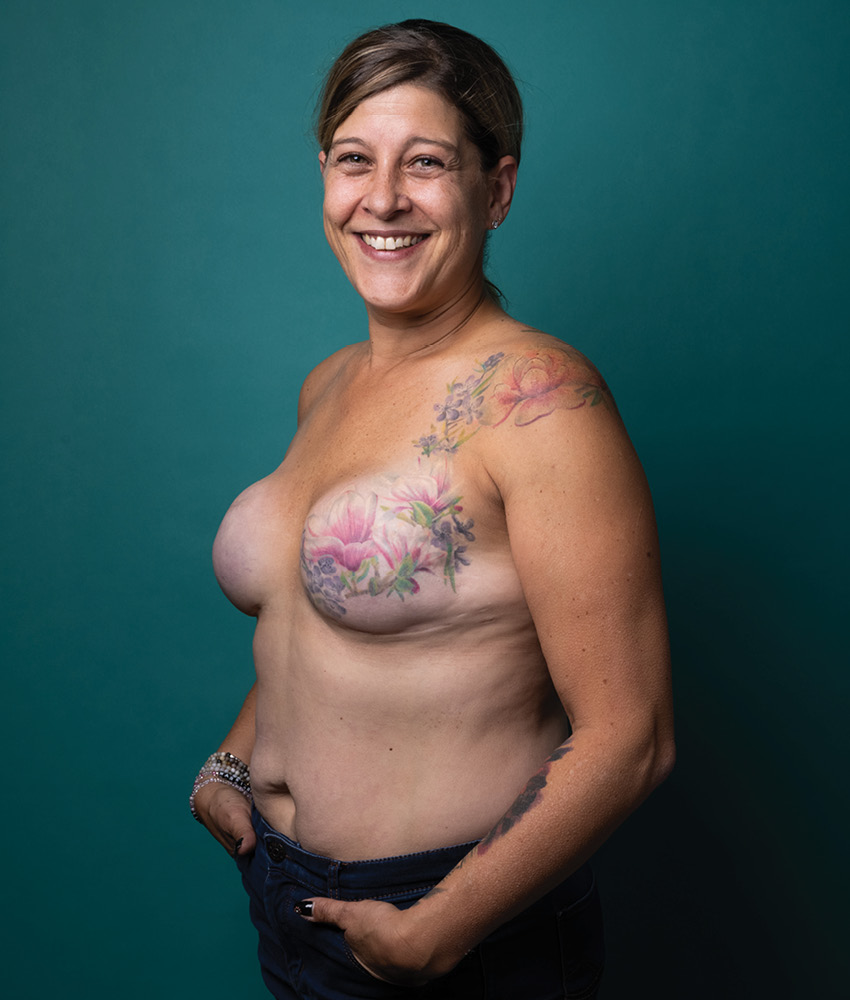 According to the Canadian Cancer Society, nearly 50 percent of Canadians will develop cancer in their lifetime and a quarter of us will die from the disease. Among Canadian women, 13 percent of those deaths will be from breast cancer.

“Cancer takes away so much,” Karen says. She looks around the room. “But now they can look down and see the art.”

At six o’clock, seven long hours after the day began, most of the women are done. They step in front of the floor-length mirror for a first look to a chorus of oohs and aahs and mounting applause. Megan does a little dance around the room. Happy and a bit stiff.

Then everyone huddles around Vanessa’s chair. The dark shading around some of the orchids’ petals has been painstaking, and she’s the last one to finish. She cries when she finally gets to see it. Her sister Amanda cries. RJ cries.

“I told you, I’m a cry baby!” he says defensively, and everyone laughs. 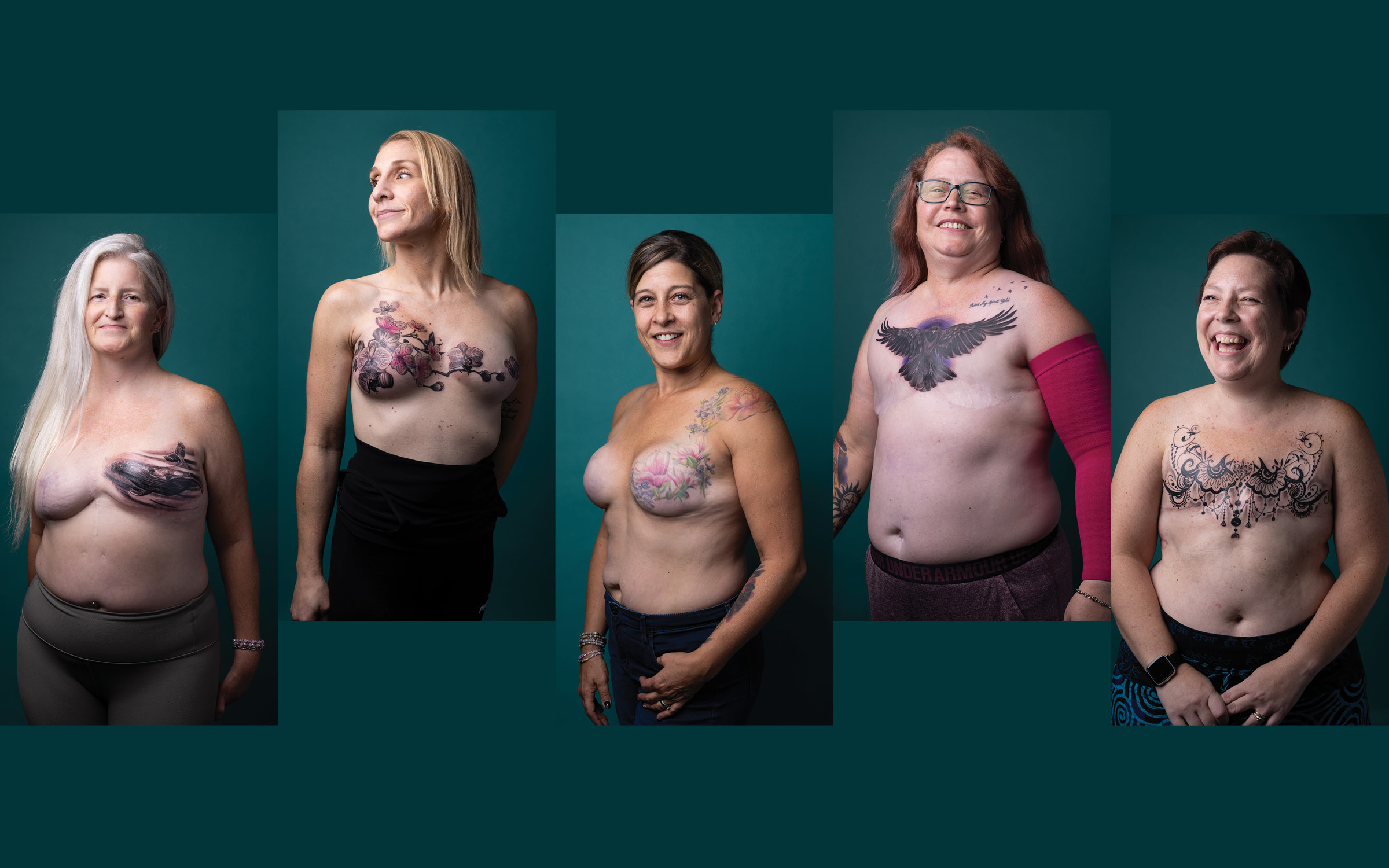