From kite-boarding to sleigh rides, skating to taffy making, Canadians know how to have fun in the snow 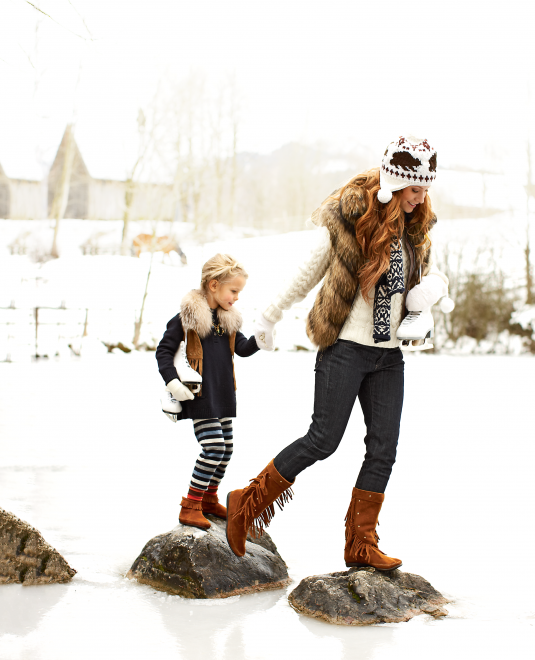 Kite-boarding mecca
Location: In and around Regina.
No sea? No bother. Clever prairie adrenaline junkies are harnessing the power of the wind and combining kite flying and snowboarding into the new must-try winter sport. The wide-open spaces are perfect for gathering speed, getting some serious air and, in the process, finding the ultimate thrill. As one group’s site optimistically suggests: “If you can stand, know your left from your right, you can learn to kite.”
Wow factor: Swooping along the open prairie like a superhero.
Nota bene: The recommended age is 10 and up. Book a lesson and rent equipment via Explore Sports.

Chill bar
Location: Bodega Ice Bar, Regina
For most of the year, La Bodega is a beloved tapas bar, serving rugged takes on the classics, such as lobster poutine. But from December to March, the hot spot is known less for its warm Spanish-style nibbles than for its temporary outdoor bar carved out of ice.
Wow factor: You’ve never had colder drinks.
Nota bene: La Bodega’s ice bar also does good — proceeds go to various local charities.

Olympic-style skating
Location: Halifax Skating Oval
Power to the skating people. In a nod to the community, Halifax opened the new skating rink it had built for the Canada Games to the public before and after the competition. The huge oval, at the Halifax North Common, was so popular that Haligonians lobbied the city — with the slogan “Save the Oval” — to make it permanent, and it worked. So strap on your skates and enjoy some frosty civic pride from December to March.
Wow factor: A crush of gleeful Halifax skating enthusiasts will be toasting their success with a few victory laps on a surface that is almost as big as three NHL rinks.
Nota bene: Skates are available on a first-come, firstserved basis.

Nature lovers’ playground
Location: The Annapolis Valley
Under an hour outside of Halifax is the movie-set-worthy Annapolis Valley, known for its cross-country trails, snowmobile runs and toboggan hills. Consider starting your journey at one of the area’s quaint lodgings, like the Old Orchard Inn. Or visit nearby hikes that are open to skiers, such as the Woodville Hiking Trails — a truly peaceful outing on a series of former logging routes.
Wow factor: Stopping to find the perfect perch amid the trees to peer out over the valley.
Nota bene: The area’s tourism board is way into geo-caching (a kind of sophisticated GPS -based treasure hunt), if you want to add a high-tech layer of discovery to your outing. 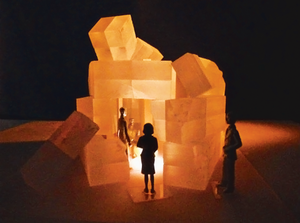 Architectural sensation
Location: The Forks, Winnipeg
Form meets function this winter at the downtown outdoors hub the Forks, located at the junction of the Assiniboine and Red Rivers. Canadian superstar architect Frank Gehry is designing one of five warming huts for the season. At a cost of $10,000, the structures — used by trail skaters for cozy breaks — are all striking. This is one pop-up enterprise worth travelling to.
Wow factor: Seeing Gehry’s work up close and personal.

Historic celebration
Location: Festival du Voyageur, Winnipeg
Add a healthy dose of Canadian history to your outing at Winnipeg’s Festival du Voyageur. Founded in 1969, it has blossomed into a celebration of the joie de vivre of the fur traders who established the area’s Red River Colony. Try your hand at a series of so-called voyageur sports, including tugs-of-war, led by costumed referees. Pause to visit an Aboriginal installation and ponder whether a teepee would really keep you warm at –40C.
Wow factor: The sheer number of fur hats you’ll see in one place.
Nota bene: The festival lasts 10 days, starting February 17.

Urban ice trail
Location: Colonel Samuel Smith Park, Toronto
Downtown, Nathan Phillips Square does all the heavy lifting when it comes to ice skating in Toronto. But this year, skating fanatics have a new surface to skim: the Colonel Sam Smith Ice Trail in Etobicoke. The trail’s two large interconnected loops add up to 250 metres along the Lake Ontario shoreline — a perfect country day, sans commute.
Wow factor: The ice is artifi cially cooled, so it won’t get slushy no matter what the temperature.
Nota bene: The trail is located next to the Power House Recreation Centre at 65 Colonel Samuel Smith Park Drive, which houses an indoor skate-changing area.

Sightseeing on skates
Location: Rideau Canal Winterlude, Ottawa
The nation’s capital has winter partying down to a science with the 34th annual Winterlude festival this February. At its heart? The frozen Rideau Canal, a 7.8-km stretch of smooth skating dotted with rental huts, benches and plenty of stops for hot chocolate and Beaver Tails.
Wow factor: Check out the Taste of Winterlude, where local chefs create delicious wintry menus and you can resto-hop on skates.
Nota bene: There is life beyond the canal. The Snowflake Kingdom in Hull’s Jacques-Cartier Park is a must-visit for families, with snow slides, obstacle courses, sleigh rides and even craft lessons for kiddos.

Snowshoe getaway
Location: Cypress Mountain, West Vancouver
Vancouver has an embarrassment of mountain riches, all within reasonable driving distance, and an equal number of inventive adventures. Cypress, for one, has embraced the explosion in snowshoeing with a number of custom packages that are equal parts exertion and reward. There’s an evening Chocolate Fondue Tour, comprising three hours of tromping through forests and glades and punctuated by a stop at a warming hut, where a steaming mug of apple cider gives way to a candlelit chocolate-fondue feast.
Wow factor: Getting to feel like a posh ecotourist for just $50 a head.
Nota bene: You can take it up a notch with a full-fledged cheese fondue added to the festivities. 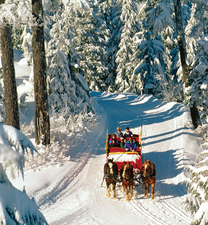 Family fun
Location: Grouse Mountain, Vancouver
Over at Grouse Mountain, sign up for a classic sleigh ride through the mountaintop’s snowy woods — the pickup spot is, of course, Santa’s workshop . Rides are free with your lift ticket and seem just a smidge more adventurous than heading straight in for hot chocolate by the chalet fireplace. But not a lot more strenuous.
Wow factor: The silence away from the crowds.
Nota bene: Grouse is a mere 15 minutes away from downtown. (Photo credit: Ron Watts/Corbis)

Snow haven
Location: Marble Mountain, near Corner Brook
The Maritimes may not have the same kind of ski reputation as the West Coast, but a visit to Marble Mountain, seven hours outside of St. John’s, puts you in the foothills of the majestic Appalachian Mountains. They boast a vertical drop the highest of any ski area in Atlantic Canada, and the hill is close to Corner Brook, which is the snowiest city in Canada. Watch for a new terrain park for snowboarders, too.
Wow factor: A quieter approach to ski culture, served up with a side of that famed Newfoundland hospitality (no word on whether kissing the cod ever happens on the ski hill…).
Nota bene: If you’d like to dabble in other local pastimes, ask about nearby snowmobiling and dogsledding adventures.

Night skiing
Location: Canada Olympic Park, Calgary
Looking for a date night that way overshoots your usual? Night skiing at Canada Olympic Park in Calgary is the answer. Not only can you squeeze a few hours of fresh air and exercise into an evening, but you also might rub snowsuit elbows with honest-to-god Olympians — if not barrelling down the mountain at top speed, then at least on the new high-speed chairlift.
Wow factor: Watching the female boarders catch serious air at the Burton Canadian Open.
Nota bene: Snowboarders can gloat that upgrades have made the hill’s large half-pipe longer and steeper — matching the exact specs our athletes will face at the 2014 Sochi Winter Olympics.

Downtown Nordic skiing
Location: Canmore Nordic Centre, Canmore
At some destinations, the cross-country trails can feel like an afterthought. But the Canmore Nordic Centre is known for its sophisticated trails, which were developed for the 1988 Winter Olympic Games. Newbies can also dabble in the sport thanks to a clever take on commuting: Instead of removing snow from its streets, Canmore piles truckloads of it onto Main Street, creating a twoblock- long ski trail that features all kinds of races and fun family activities.
Wow factor: Schussing around town makes you feel like you’re breaking a bylaw.

Maple fest
Location: Cap-Saint-Jacques Nature Park and Sugar Shack, Montreal
You don’t have to venture far from downtown Montreal to find a classic cabane-à-sucre experience. Nestled in the Cap-Saint-Jacques Nature Park is a sugar shack open from late February onward. You’ll tuck into classic Quebec fare, such as homemade pea soup, crepes with certified-organic maple syrup and maple syrup pie.
Wow factor: For the munchkins: Taffy on the snow isn’t to be missed.
Nota bene: Get there via a tractor-drawn sleigh ride through the maples or a 20- to 30-minute hike.

Cross-country paradise
Location: Oka National Park, Montreal
This is the insider choice for cross-country skiers, thanks to its magical tree cover and the long, groomed trails, covering almost 50 km. Make your way to the top of the Calvaire d’Oka trail for a sweeping view of Lac des Deux Montagnes and the Adirondacks. And don’t rush to leave; the 4-kmlong La Pinède trail is lit up in the evening.
Wow factor: The mountain view, if not the skiing, should leave you breathless.
Nota bene: There are kick-sleds for rent, too. 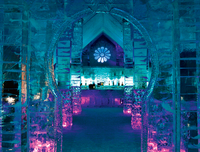 Luxurious igloo
Location: Quebec Hôtel de Glace, near Quebec City
Some Canadian destinations are made for winter. You’ll have to revise your packing list for this place: extra socks and long underwear. For bedtime. The Quebec Ice Hotel in Quebec City extends its chilly reach right to your bed, which is built on blocks of ice. The room will be between –3C and –5C, but the hotel provides a cozy sleeping bag and insulating bedsheet to top your mattress. The shimmering temporary structure — which exists from January to the end of March — is just minutes from downtown Quebec City, so you can add as many cozy bistro meals to your glam winter camping as your schedule allows.
Wow factor: Being able to boast you slept on ice.
Nota bene: Be sure to visit the website for packing tips.