Will meat eaters and vegetarians ever get along?

What is it about being told to eat your vegetables that bugs people so much? 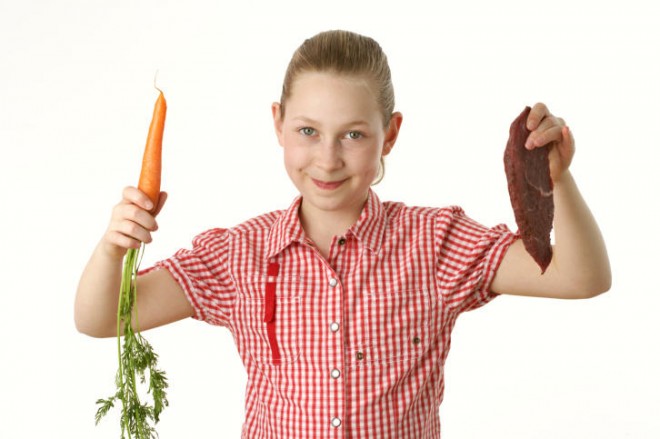 What is it about being told to eat your vegetables that bugs people so much? I was a vegetarian for a long time—I started eating meat again two years ago—and while many vegetarians and vegans are characterized as smug know-it-alls who are always wagging their hummus-covered finger at carnivores, I experienced the opposite.

When I was a vegetarian, I used to dread going to dinner or out to lunch with a group for the reason that once the carnivorous crowd finds out you’re a vegetarian someone always feels the need to point that you’re wearing leather shoes, or you have a wool sweater on, or whatever obvious sin they uncover that indicates you are a hypocrite and therefore morally compromised and your position indefensible (threat neutralized! Let’s eat).

I used to get annoyed, sometimes angry. But I also understood that some people are defensive about eating meat because on some level they know that do so is a complicated choice, especially if you like animals, which I do except for my cat who I really hate this morning.

Now that I eat meat (and with the appetite of a longshoreman) I’m a little more sympathetic to that point of view. When I go out to lunch with a vegetarian friend, I’m conscious of my decision in a way that I wouldn’t be if I were tucking into a burger with a fellow carnie. Like most people, I pretend that meat just appears on the plate and that it doesn’t cause any suffering (magic wings!).

But I don’t think it’s wise for vegetarians and meat eaters to regard each other suspiciously from across the dinner table and that’s really what most of us do in life and in debates online.

In a recent column, NY Times writer Mark Bittman, who is a thoughtful advocate for more plant-based eating, expressed his opinion that to do so was better for the planet, for human health and for animals. While I’m not convinced that the diet he’s advocating is the key to improved health for me—one of the reasons I continue to eat meat regularly is that I do feel better and less hungry, generally—the issues he raises can’t be ignored.

In the comment section of Bittman’s follow up blog, a few people got up in Bittman’s grill for daring to complicate the issue of what we eat while others agreed with him wholeheartedly. Nobody appeared to listen to one another’s perspective with any kind of attention. Both sides behaved as if what we eat, how we get it and who or what it harms is all so simply resolved. And to that this former vegetarian/current carnivore says: if only.