Slot this recent story about students being reprimanded for hugging at a Brampton Public School in the 'The Nutty Things Adults Do' category. 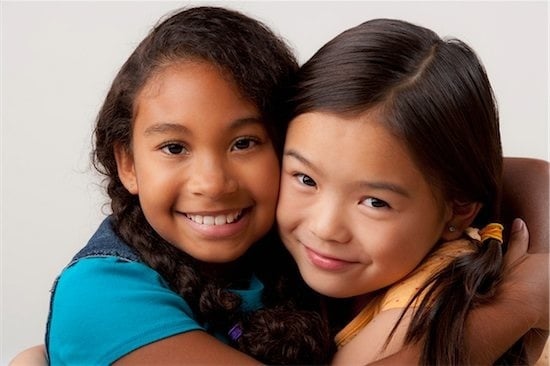 Slot this recent story about students being reprimanded for hugging at a Brampton Public School in the “The Nutty Things Adults Do” category. According to the Toronto Star, the teachers at Brampton’s Earnscliffe Senior Public School enforce a “no loving, no shoving” rule among the student population. The point of the rule: to curb violence and inappropriate sexual contact among students.

But a group of grade six and seven students at Earnscliffe (ages 12 and 13) have not only taken issue with the idea that hitting or kicking another person should be on par with affection but they’re also asking teachers to distinguish between inappropriate make-out sessions and an innocent hug between pals.

Peel District School Board communications director Carla Pereira defends the ‘no loving, no shoving’ idea, saying that it “is really intended to remind students to keep their hands and feet to themselves.” Pereira suggested however, that the enforcement is up to the discretion of the observer. “We’re not policing every instance for sure,” said Pereira. “In terms of a hug, generally speaking, if it was at the wrong place at the wrong time it might not be permitted.”

But the girls tell The Star’s Jaime Poisson that they have been chided for indulging in innocent hugs and affection. And though they’re not even out of public school yet, the girls reveal they have a remarkably mature grasp on the absurdity of the situation.

“Two friends hugging is different from a boy and a girl making out in the corner,” Lily Hopkinson, 12, said. Friend Janna El-Daly, 12, went even further, charging the school with making an irresponsible association between physical contact and wrongdoing.

Reportedly tired of getting in trouble for hugging, the girls decided to organize their opposition. Now they’re planning a ‘hug-in’ to protest the rule, which is scheduled for June 20. The event will apparently see students hug indoors and all non-student protestors take to the sidewalk for their hugs.

For their efforts, the girls say they were hauled into the principal’s office and forced to spend the day in the guidance department. Let’s hope the thoughtful and creative-thinking girls were the ones being asked to provide the guidance to the administration rather than the other way around.