What it's like to fire a C-7 rifle...when you're hungry, tired, and armed

In basic training, I shot the C-7 rifle for the very first time. I had maybe 5 hours sleep in the previous three days. My had eaten my last meal as I walked to the next checkpoint and that was maybe 9 hours before. I was tired, hungry and armed. 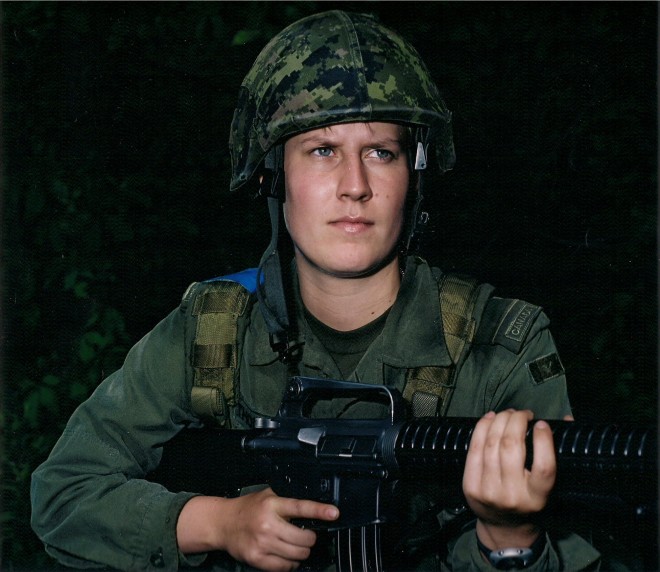 Holding a rifle for the first time can be scary. Funny, because I grew up in Borden, ON, listening to the sound of guns and bombs exploding on a nightly basis. But when it was put in my own hand for the first time, I was shocked by the weight of it.

The reality is, in war, your weapon is your lifeline. It’s what stands between you and death. So you learn to respect that reality. You carry it everywhere. You name it. (Mine was Betsy.) You sleep with it in your sleeping bag so it doesn’t get dirty because then it won’t fire properly. Hell, I think that during one particularly exhausted evening, I talked to it. In fact, Betsy and I developed such a relationship that in the middle of the night, in my sleep deprived state, I somehow managed to get dressed in my uniform, take out my rifle and make “rat-ta-tat-tat” noises…apparently defending our country in my sleep.

So the first time you fire that weapon is a very serious day. Especially since you’re being tested on your ability to shoot in some semblance of straightness. You learn all sorts of breathing exercises to control your movements and all the safety procedures are gone over dozens of times. The instructors do everything possible to make you realize that every shot you make should be necessary.

I remember it being a sunny day but after a week in the field, we were all exhausted, frustrated and hungry. And let me tell you, they ensure you feel that way on purpose. It’s all about learning to focus when it feels impossible to do so because that would be the reality of war, which we’re all being prepared for. We were given our rounds, which felt shockingly heavy, and then sent off to the range. All I could think about was how hungry I was and it would be an understatement to say I’m not a lovely human being when I’m not fed. So I was rapidly getting grumpier and less happy to be laying in the dirt with Betsy. My first few shots were all over the place as I tried to get used not flinching with the sound and not fearing the bruises the recoil might give my shoulder. The little computer that was grading me was making some rather persistent and unhappy beeps to let me know I wasn’t quite getting the hang of it. But after some practice, my aim quickly improved.

I’ve mentioned before that I was a rather girly girl and this wasn’t really a secret with my fellow platoon mates. So needless to say, no one expected anything stellar from me when it came to the actually shooting of the C-7. But you know what? I’m actually a pretty decent soldier. I had the fastest time in stripping (taking apart) my rifle both in the light and in the complete darkness. And when it came to shooting the thing? I’m gonna go out on a limb and say I was pretty darn fantastic. I had the best aim out of the lot of us. The girly girl showed them how it was all done. Vindication.

So when I returned home from training, I felt haunted by the disappearance of the object that had become the source of my obsession. I woke up in the middle of the night looking for my rifle and when I didn’t find it, beads of sweat would tear across my skin until I realized I was home. I didn’t need to panic any longer.

The moral of this little story is that firing a weapon can’t ever be taken lightly, and as soldiers, we’re taught about the grave decision we may be forced to make at some point in our careers. By teaching us that our rifle is a complex object that we have to respect, our instructors were teaching us about the responsibility that comes along with being given that complete and total trust to protect life.

And life is never something to be taken lightly.