What does your childhood bedroom say about you?

What did your childhood bedroom look like? And how did it affect your perspective on issues of class as an adult? It’s a fascinating idea that documentary photographer James Mollison brings to life in a collection of photographs currently posted on the NY Times' website Lens (you can see it here). 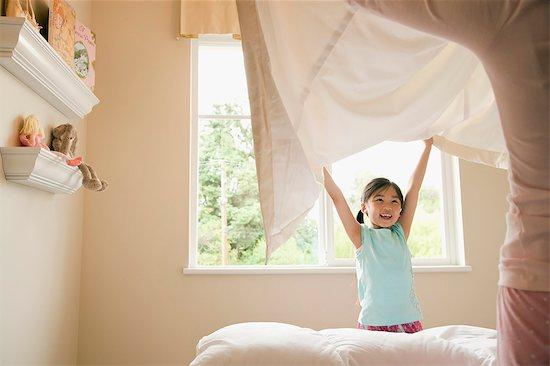 I grew up in a 150-year-old home in a small village in Southwestern Ontario. The walls of my bedroom, which I shared with my older sister until I was 12 years old, were thick with layers of antique wallpaper and paint. The wooden floors were rough and unsanded (splinters were the villains of my youth) and the closet smelled like a mix of mothballs and mold. When the cat went in there to scratch around it smelled like something else altogether.

My single bed was something passed down from a relative, as was my dresser.

It wasn’t a fancy set-up, but it was functional and there were a few homey touches (floral bedspreads and frilly pillowcases). But it never satisfied my lust for luxury. Visits to friends’ houses, with their fancy IKEA bedroom sets, only encouraged my desire for newer, cooler stuff. I used to fantasize about having my own pink and white room, plus a squishy waterbed (it was the 80s).

What did your childhood bedroom look like? And how did it affect your perspective on issues of class as an adult? If at all? It’s these questions and more that documentary photographer James Mollison asks the viewer to consider in a collection of his photographs currently posted on the NY Times’ website Lens (you can see it here).

The collection, which is part of a book called Where Children Sleep, is made up of images of kids’ bedrooms from around the world. From Tokyo to Kentucky, Mollison photographs over 50 private sanctuaries as well as the kids themselves.

Mollison was prompted to start the project as a means of engaging with the ideas of children’s rights. On his website, Mollison said: “It occurred to me that a way to address some of the complex situations and social issues affecting children would be to look at the bedrooms of children in all kinds of different circumstances.”

He also provides a portrait of the child alone—out of their socio-economic context—so they may appear, as he says, “as individuals, as equals, just as children.”

The photographs aren’t just a quirk or a pastiche of interior design styles; they’re a comment on how children’s lives evolve under vastly different circumstances both economically and culturally.

Every kid has to sleep but not every child does it in quite the same way. Rich kids dream away in fabulously over-the-top confections that speak to their great privilege. Poor kids rest their heads on mattresses casually thrown on the floor, or in one case, on the ground outside. Others share one room with whole families.

Internet culture may have convinced us that we’re all living one pop culture-approved life, but Morrison’s photos underline how very different the experience of living remains—right down to the places where children sleep.